Heading into this week, we knew that Thursday's Consumer Price Index (CPI) would be critically important. It did not disappoint.

CPI is one of two key inflation reports in the US.  PCE (Personal Consumption Expenditures) is the other big index, but because CPI comes out 2 weeks earlier, it gets almost all of the market's response.

The response to Thursday's CPI was record setting in at least one important way, and still astonishing in many others.  Let's talk about why.

Why was this week's CPI so important?

First off, almost every CPI report has been important in 2022.  No other economic report has caused more volatility for the bond market.  Because bonds dictate interest rates, we can also say CPI has caused just as much volatility in the mortgage world.

CPI is the king of economic data in 2022 because inflation is the dominant focus of the financial market and the Federal Reserve (aka "the Fed").  The Fed sets policies intended to keep inflation at a low, stable level.  Runaway inflation causes the Fed to hike interest rates in order to slow down the demand side of the economy.  In the post-pandemic environment where a good amount of inflation is thought to be driven by the SUPPLY side of the economy, that's resulted in the Fed being particularly aggressive in trying to tamp down demand.

In other words, each time inflation has surprised to the upside, the market has braced for even higher rates from the Fed.  Although the Fed Funds Rate (the overnight lending rate that the Fed actually sets) doesn't directly dictate mortgage rates, Fed rate expectations set the tone for longer-term rates.

The Fed, along with the rest of the market, continues to wait for inflation data to show any indication that it is responding to the tighter policies that have been rocking the financial market throughout 2022.  This week's data was so important because it was the first great example of a potential turning point in that saga.

What did the data show?

There are two ways to look at inflation in general: the "headline," which includes everything, and the "core," which excludes more volatile food and energy components.  Markets and the Fed care much more about the core reading.

Traders and economists expected core inflation to rise at a pace of 0.5% in the current case.  That would have been a victory in and of itself compared to last month's 0.6% reading.  The actual result ended up being 0.3%! 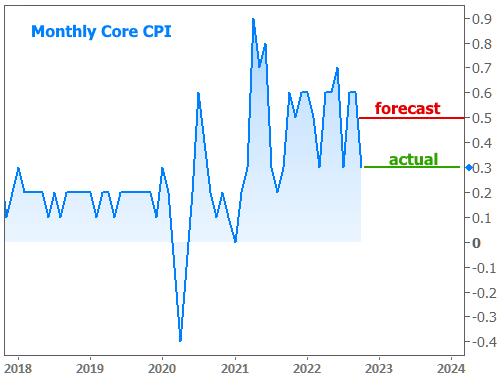 While it wasn't the first time we'd seen 0.3%, the last two times were thought to be byproducts of temporary recoveries in certain sectors.  Pundits urged caution in reading too much into the last 0.3% report due to a big dip in fuel prices (even though the core excludes fuel, it is still influenced by the cost to transport goods).  There were no such yeah-buts for this report considering gas and diesel prices were much higher over the data collection period.  And unlike July, headline inflation didn't drop at all. 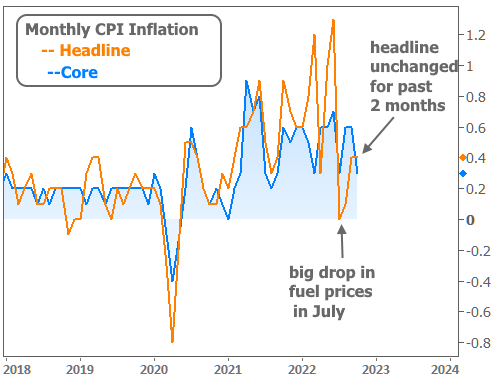 Simply put, this is the best argument to date that inflation is turning a corner but as we've said time and again, confirmation would require TWO consecutive months of similar victories.

So how did the markets react?

There are actually tradable securities that allow investors to bet on the future level of the Fed Funds Rate.  Here's how this week's CPI data impacted the outlook for June 2023: 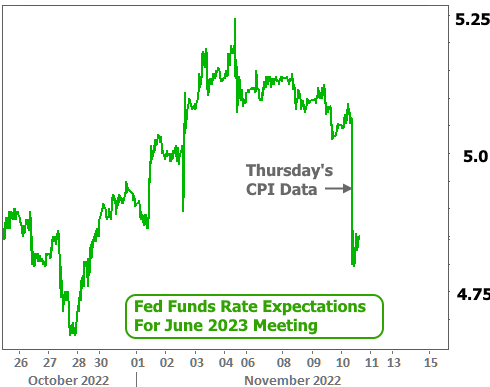 That shaves off roughly a quarter of a percent from the expected Fed rate ceiling.  The rest of the rate market followed with a similar drop.  Stocks also surged in similar proportion because they also cheer for friendlier Fed policies.  S&P futures rallied more than 5% on the day.  10yr Treasury yields (the world's favorite benchmark for longer-term rates) dropped more than 0.30% from the previous day's official close. 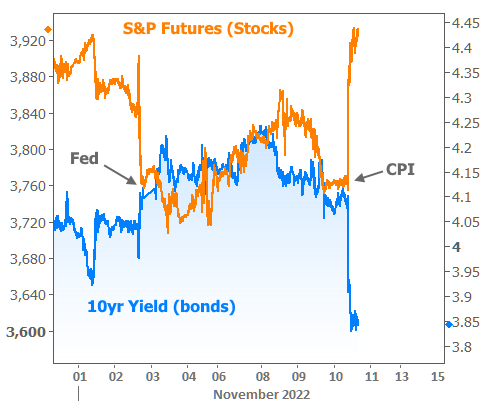 This made for the biggest day-over-day drop in 10yr yields since 2009. 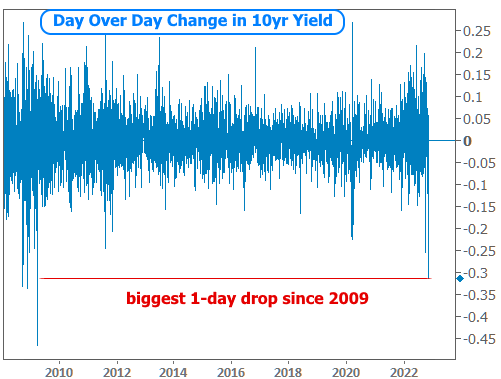 How about mortgage rates?

I'm glad you asked.  They had a good day.  In fact, they had the best day on record on Thursday.  There may have been better individual days at some point in the past as daily data only goes back to 2009, but even with that caveat, it was simply stellar. 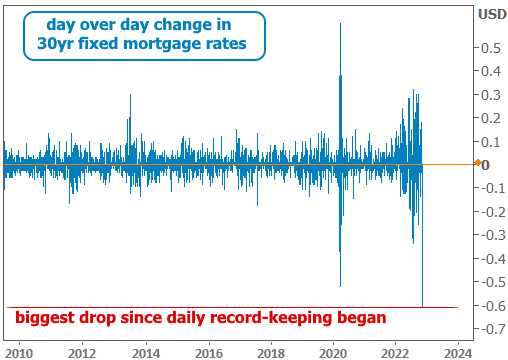 But I heard rates were higher this week.  What's up with that?

You heard wrong.  Or more accurately, you heard "stale."  Any news headlines suggesting higher mortgage rates this week will almost certainly be based on Freddie Mac's weekly rate survey.  It's the industry's longest-running and most widely cited rate index, but not the best metric for timely tracking.  The survey primarily captures Monday and Tuesday's rates and compares them to the same days from the previous week, but doesn't report the results until Thursday.

Freddie is in the process of updating its methodology, but in the meantime, 2022 has been a rough year for misdirection in mortgage land.  The following chart shows the highly regarded daily rate average calculated by MND versus Freddie's weekly survey.  (Note: MND is generally slightly higher because it factors in upfront costs whereas Freddie lists them separately). 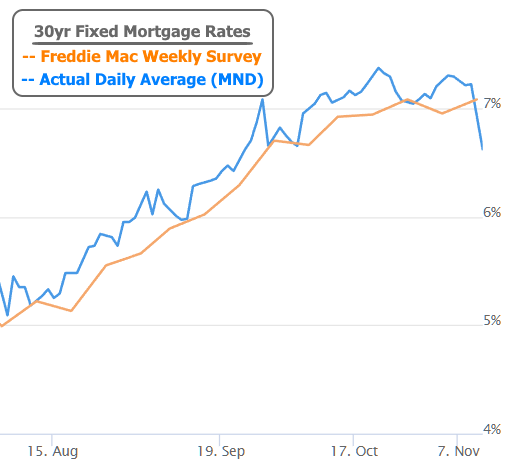 That's great, but how long can this continue?  Is this the big shift?

That's the big question!  We've been steadfast in saying that ONE stellar inflation report is only half of the equation required to confirm a big shift in the inflation/rate narrative.  Thursday's market movement clearly suggests some traders are jumping the gun.  Can we really blame them?

Rates have risen at the fastest pace since the 80's to levels not seen in more than 20 years.  The Fed has been ultra transparent in telling us what it will take for them to ease their unfriendly rate policies.  The market has established an unequivocal focus on CPI data as THE report to speak most loudly to the Fed's goals.

So.....  when CPI comes out MUCH lower than expected a week after Fed Chair Powell just reminded the market that the rate hike outlook would be getting even worse in December UNLESS inflation data shifted in a big way, it's no surprise to see markets react in record-setting ways.  They not only have to account for the inflation implications in the bigger picture, but they also had some extra defensiveness from last week's Fed meeting to erase.  It was a brutal 180°--brutally good for rates.  Bottom line, there aren't many times where the entire financial market is so obviously on the edge of its seat over one moment of economic data with everyone in agreement about how to trade a specific result.  It was no surprise to see a big drop in rates on Thursday.  The only arguable surprise was that the move was a bit bigger than most would have expected based on the data.

But can it last?

It may or it may not.  At some point, rates will be lower than they are today.  None of next week's data is on par with CPI in terms of the power to influence rates, but the market may simply conclude that it made a big enough move on Thursday that it can wait and see how the data evolves from here.

Either way, it was a big victory in the saga that is 2022's rate landscape.  If a similar CPI result (or better?) follows next month, we'll be able to say with near certainty that we've seen the highest rates in a long time.