The importance of the Consumer Price Index (CPI) cannot be overstated for most of 2022.  That's doubly true in November and December.  The Nov 10th iteration rocked the market (in a good way).  The Dec 13th iteration has the power to confirm or refute November's takeaway, and it's now only 8 calendar days away.  If it feels like everything since Nov 10th has been a waiting game for Dec 13th, that's a fair conclusion.

It's not that other data hasn't mattered or that it won't continue to matter, but it will end up looking like mostly sideways noise in the bigger picture while next week's CPI (and Fed day the day after) will set the tone in the bigger picture.  Between now and then we're range watching with last week's low yields representing the latest floor as the new week pushed back in a less friendly direction.

Those low yields--basically 3.50% in the 10yr--align perfectly with the high volume sell-off back in June.  It was also the scene of a high volume break out during the late September Fed week and it clearly serves as a major technical and psychological barrier blocking new progress for any aspiring rate rally. 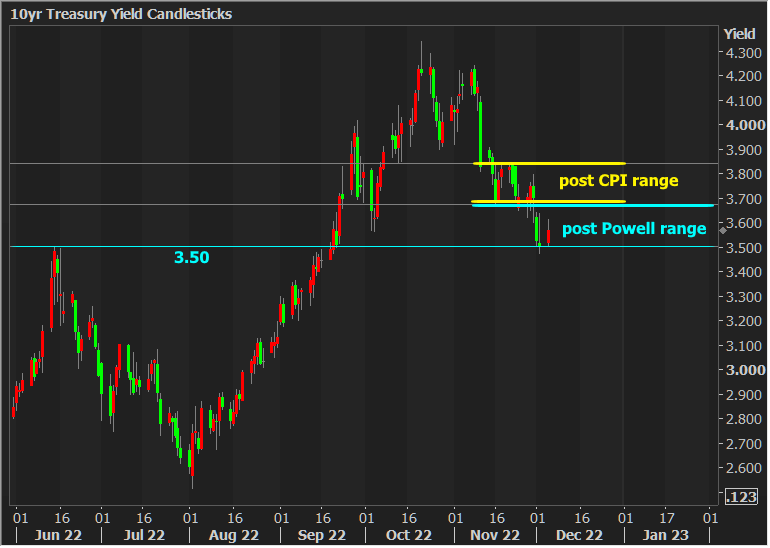 3.68 is the nearest overhead level of consequence.  It served as the lower end of the most recent post-CPI range and would be the more critical line of defense if the shorter-term technical ceiling at 3.62 is broken.

Apart from the ISM data that's already out, this week's economic reports are mostly on the B team.  Producer Prices on Friday might be a slight exception because, unlike last month, it's coming out before CPI (both for the month of November).  Even so, big market movement potential would require the core month over month level to fall quite far from forecast.  Otherwise, traders will easily prefer to wait the 2 business days for CPI.