MBS Live Day Ahead: Be Very Skeptical of Rate Forecasts and Technical Evidence

In the day just passed, bonds kicked into higher gear with respect to the correction that began to materialize last Thursday.  If you feel like you missed the signs, go back and read the second half of this post: Beware The Bounce.  Several of the commentary articles after that spoke about additional confirmation of the shift in increasingly stern verbiage (browse past posts here or here).  Corrections are normal, but they're still no fun.  10yr yields moved all the way to 1.745% yesterday, surprisingly close to the 1.748% technical level I offered in MBS Live chat when asked about the next technical ceiling yesterday (when rates were still under 1.70).

In the day ahead, I want you to keep in mind (if you don't already) that the notion of technical analysis somehow allowing us to predict the future is almost completely bogus.  1.748 was a number I picked merely because it was the high yield on August 12th, just before Hong Kong protests changed the narrative.  If it ends up being acting as some sort of ceiling, it would merely be coincidence.

But there's an undeniable desire to believe in some sort of higher bond market power or secret insider knowledge that could give us some sort of edge in predicting what may happen next.  Let me assure you, that visceral feeling--that voice in your head that says "surely, the smartest guys/gals in the room must know enough about this stuff to have some sort of idea of where we're going, and if I could only tap into that knowledge, I'd have an advantage in my rate-sensitive line of work"--is almost total and complete garbage.

I've walked a long and winding road with technicals and have come to believe, while they have a purpose, that their most insidious purpose is to act as a refuge for market watchers that don't really know what the hell is really going on or really moving markets.  I feel qualified to say this because there are times in my early days where I fit that description.

What kinds of snake oil are we talking about?  Here's an example (the analytical break-down follows the chart): 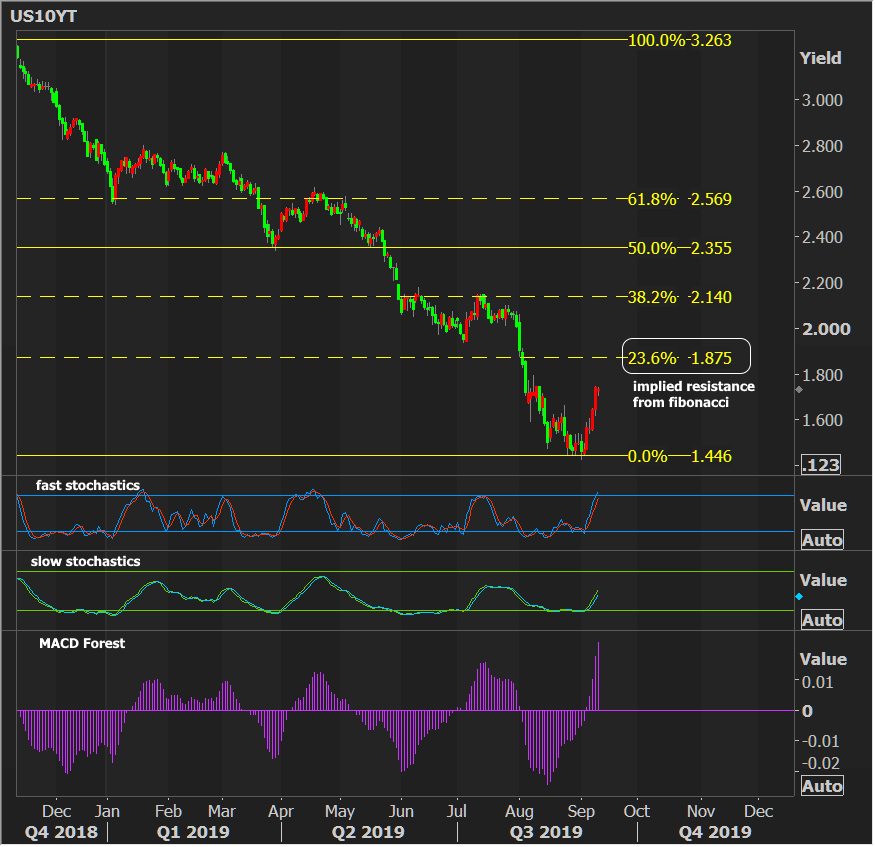 If you didn't read all the cynical preface before the chart, and only saw the chart itself and the associated bullet points, you may well conclude that bonds are going to bounce at or before 1.875%.  Of course all of the above is almost complete horse shit (yes, I used a naughty word as we're far enough down in the article that you clearly have a stomach for such things and I felt it important to convey my utter disdain for this snake oil routine).

The sneaky and terrible thing about this sort of analysis is that yields could bounce anywhere before 1.875% and the average reader would feel like the analyst "CALLED IT!  He said it would bounce and it did!"  The fact in this case is that 1.875% is a high probability bet.  We'll almost certainly get enough of a rally before  then that the analyst could claim victory and move on to the next stop on the snake oil tour.

If all this is so pointless, then what's the point of even discussing technicals?

As I've said repeatedly and as several of our knowledge base entries on technicals profess, the highest and best use of technical analysis is NOT to predict the future, but rather to help us understand what bonds are doing TODAY and/or to measure the significance of any given move.  In other words, I couldn't responsibly predict that 10yr yields will bounce at the nearest technical ceiling (let's call it 1.75% in the current case), but I could tell you if we move much above that, it would be another piece of confirmation for the ongoing correction.  After that, 1.79+ would be the next line in the sand that carries more significance than any other random level.

The funny and ironic thing about technical levels though, is that they have two distinct modes of operation (in the cases where they actually do prove to be relevant).  One school of thought is that they act as true ceilings and floors that resist being broken.  The other is that they act as lines in the sand that signal a potential shift only when crossed.  In other words, if I believed in 1.75% as an important technical ceiling that signified more likely bond buying, I accept the fact that sellers could easily carry yields a bit higher than 1.75%, but that it's time to buy now that the line has been crossed.  In the best case scenario, that's exactly what we'd hope to see today even before this afternoon's 10yr Treasury auction.