Financial markets were already dealing with rapidly evolving Fed policy shifts, a big jump in rates, and a big drop in stocks. But after Russia invaded Ukraine, volatility has been on another level.

As far as the mortgage market is concerned, the average 30yr fixed rate experienced some of its biggest 2-way swings in more than a decade.  The following chart shows the change in rates every 48 hours.  This makes things more interesting because big moves in rates often take more than a day to play out.

That was the case at the start of this week as the combination of Monday and Tuesday brought the biggest 48hr drop in rates since our daily record keeping began in 2009.  The only exception would be March 2020, and there are several good reasons to keep March 2020 out of comparisons.

To make the volatility demonstration even more impressive, by Thursday rates had moved higher at the fastest pace since 2013 (again, excluding March 2020).  In fact, there was little change between Wed and Thu, so the big bounce back actually happened in only one day. 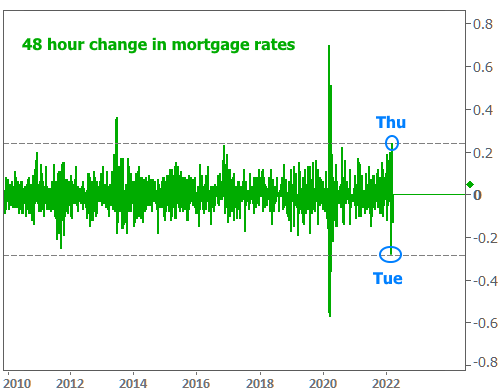 This means that prospective borrowers who chatted with loan officers about the recently lower rates on Tuesday were in for an unpleasant surprise less than a day later. Fortunately, things settled down very nicely by the end of the week, but it was a wild ride getting there.

How is the Ukraine invasion causing this volatility?

The easiest way to think about Ukraine's market impact is via the simple notion of risk.  Generally speaking, high stakes geopolitical events create buying demand for safe haven assets like bonds and selling demand for riskier assets like stocks.  Because bond yields fall when demand increases, the result is stock prices and bond yields moving together.  During a fluid, highly uncertain situation such as the one in Ukraine, the market may rapidly alternate between hope and fear, risk aversion and risk tolerance.

That's exactly what happened during most of this week. 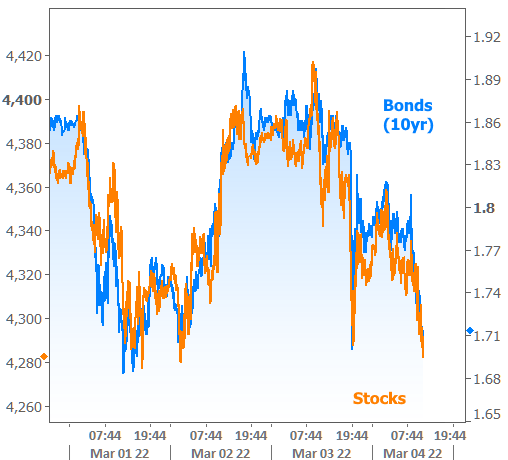 As always, changing the time frame and y-axis scaling can highlight different trends. While the past 4 days line up quite well, if we zoom out on the same chart, the message changes a bit: 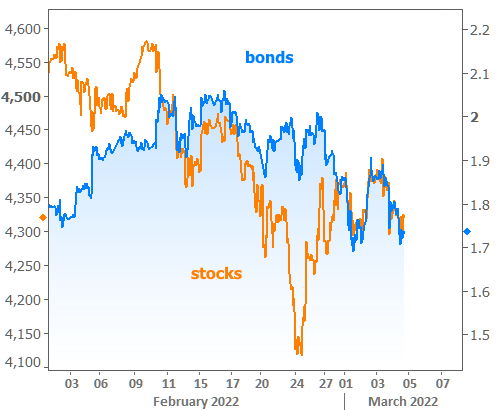 Even on the 2nd chart, the lines have mostly been moving in the same direction since the first invasion warning in early February.  This isn't always the case, as can easily be seen if we zoom in on the previous month of trading. In fact, we see stocks generally falling while bond yields are rising: 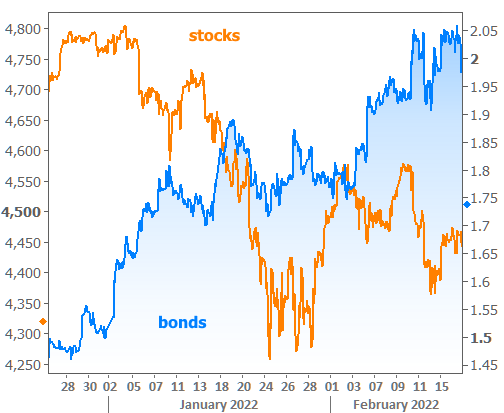 What's up with that?

Stocks and bonds were moving in opposite directions in January because the market was adjusting to a less friendly Fed policy outlook.  This hurt both at the same time.  The fact that markets were highly focused on Fed policy before the invasion resulted in widespread questions as to whether anything about the Fed outlook might change in light of geopolitical risks.

Those questions are easiest to answer with a chart of Fed Funds Futures--financial instruments that allow the market to bet on the level of the Fed Funds Rate at a certain future date.  The lower the line, the higher the market thinks the Fed's rate will be.  Here's how the market has been betting on the Fed's rate by the end of 2022 (note: 25bp = 0.25%): 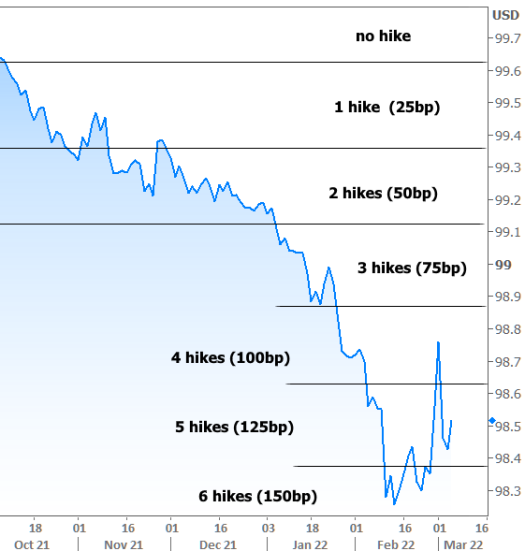 The chart above suggests the Ukraine invasion caused a legitimate shift in the Fed rate hike outlook, and it temporarily caused a gigantic shift early this week.  Fed Chair Powell spoke to those expectations in scheduled congressional testimony this week.  He confirmed that the outcome in Ukraine could impact Fed policy in a variety of ways, but more so in the way that wind causes ripples on the water.  The underlying current, however, continues inexorably toward multiple rate hikes by the end of the year.

Are those rate hikes bad for mortgage rates?!

This question is also best answered with a chart.  It shows the change in the Fed Funds Rate (the thing everyone's talking about when they say "the Fed is hiking rates!") versus the change in 30yr fixed mortgage rates since September 2012. 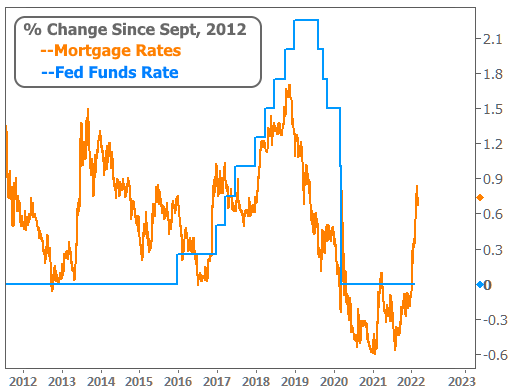 The big spike in 2013 was the market's way of preparing for the Fed's eventual policy tightening. The process was painful, but it only took several months, and then it was over.  Rates moved generally lower for the next 3 years. The rising rate trend in 2017 and 2018 was a bit more complex, but it had very little to do with the ratcheting up of the Fed Funds Rate.  Moreover, there are several obvious examples of mortgage rates falling even as the Fed kept hiking. 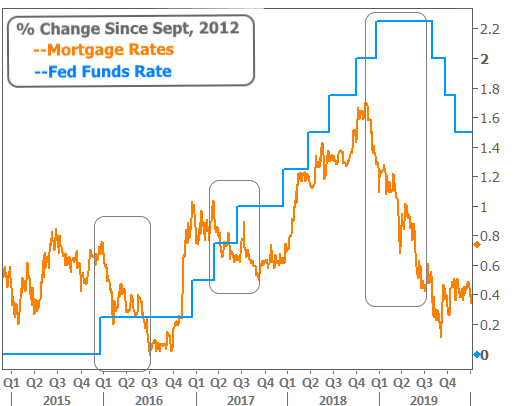 So the question is not whether or not the Fed Funds Rate affects mortgage rates, but rather, whether the mortgage market has already adjusted enough to account for Fed policy changes.  The answer?  It depends (doesn't it always?) on how things go with the economy both at home and abroad.  Inflation is the focal point in this uncertainty.  More inflation means faster Fed rate hikes and vice versa.

That brings us full circle with the Ukraine-related rate volatility.  The bond market has been pulled in two directions this week because the invasion has caused a huge spike in oil prices.  While oil by no means dictates rate momentum, it does have a lot to say about inflation.  As such, when the bond market is intently focused on inflation, oil prices and bond yields tend to line up fairly well as seen in the chart below. 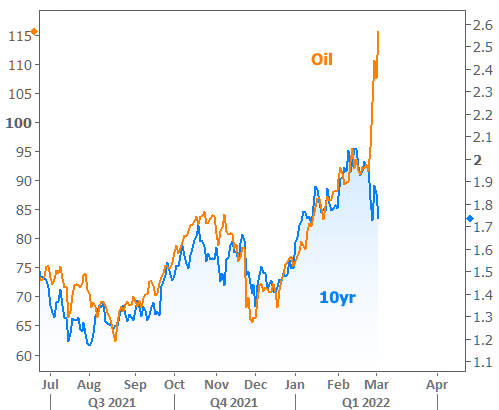 Clearly, the correlation between oil and bond yields broke down after the Ukraine invasion, but it's not because bonds stopped caring about the inflation impact.  Rather, investor demand for the safe haven provided by bonds was so high that it simply outweighed the inflation implications.  Thanks to the existence of inflation-indexed bonds, we can actually see both of these impacts play out separately.

The following chart shows regular old 10yr Treasury Yields in blue and the inflation-adjusted yield in green (where the 10yr would be if not for inflation).  Subtracting one from the other gives us implied inflation (in orange), as seen by traders who are actually betting on it. 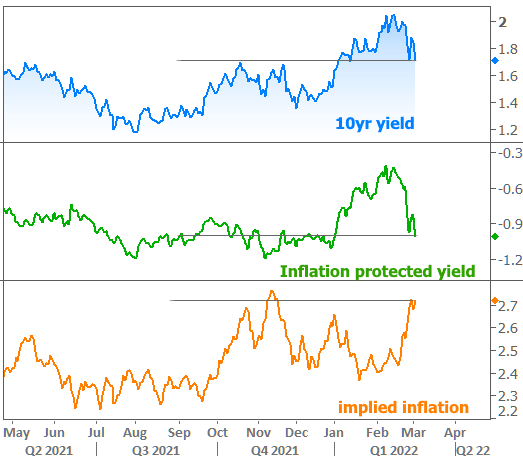 Long story short, the bigger visual drop in the green line versus the blue line gives us a better idea of how much demand has flowed into the bond market recently while the orange line confirms the oil price spike is indeed pushing inflation expectations higher.

Bringing it all together, if the Fed is in the process of tightening policy due to inflation, the Ukraine invasion doesn't really do much to change their mind.  Fortunately, as we've seen, mortgage rates had already done a lot of the work of moving to higher levels in anticipation of the Fed's tightening cycle.  Granted, they weren't necessarily done, but the gravity of the Ukraine invasion provided an obvious opportunity to take a break.

On that note, in case it needs to be said, although we like low rates, we definitely don't like everything that pushes rates lower (in fact, most of the time, it's the bad stuff).  It's the nature of the this type of analysis to find ourselves discussing horrible events in the same sentence that we welcome a drop in mortgage rates.  We'd gladly give up the recent rate rally to put an end to the violence.