Seemingly overnight, the mortgage rate narrative has changed rather drastically, at least in relative terms. While rates had risen gradually from near-all-time lows in August, they were still in a historically low range by the end of December. A week later and we're at the highest levels in 2 years.

There are all kinds of ways to quantify the movement, but a chart provides the clearest picture. 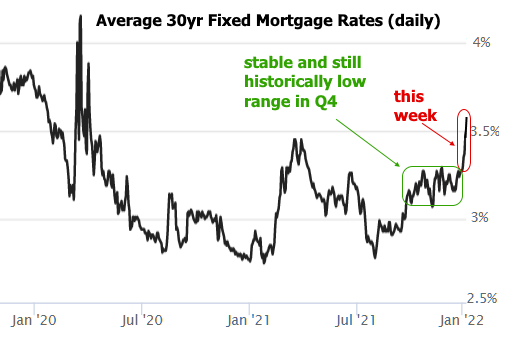 In other words, rates weren't ridiculously far from longer-term highs even before this week.  It's just a bit of a surprise to see how quickly they closed that gap.

So WHY did it happen?

Rates are based primarily on the bond market and bonds have several concerns at the moment. The biggest general concern is the shift in the narrative surrounding covid and the omicron variant.

Traders were already prepared for a big uptick in covid case counts based on the omicron surge in other countries and subsequently in certain parts of the US in December, but they're also cognizant of the possibility that omicron may not impact the economy in the same way as the delta variant.  At the same time, there's speculation that record-setting cases counts could hasten covid's endemic status much earlier than previously expected.

Bonds feed on fear, turmoil, and risk aversion. If the pandemic outlook might be improving, the net effect is upward pressure on rates, all other things being equal.  Whether they're right or wrong, traders are looking past what may be a challenging January in terms of covid and forward to a more economically palatable phase of the pandemic.  At the very least, they're positioning for the possibility, and in this case, that means higher rates.

But that's just the general side of the story.  There are specifics as well--individual events that can be clearly tied to drama in the bond market.  This week's most notable example was an update from the Federal Reserve that suggested an even more rapid removal of rate-friendly policies.

We already know the Fed is decreasing the amount of new bonds it buys each month (aka "tapering").  That means the Fed's bond portfolio is still growing, but at a slower pace each month.

We also already know that the Fed accelerated their tapering process as announced 3 weeks ago.  They did this in order to hike the Fed Funds Rate sooner (the Fed's playbook calls for finishing tapering before hiking rates).

The bond market had done a good job digesting all of the above because according the Fed's playbook, they would still be reinvesting 100% of the proceeds from those bond holdings for quite some time even after rate hikes begin.  The last time they normalized policy in this way, there was a TWO YEAR gap between the first rate hike and the first instance of balance sheet reduction.

That brings us to this week's big news from the Fed.  The minutes of the last Fed meeting were released on Wednesday.  They offered new insights to the Fed's line of thinking.  To make a long, boring, complicated story very short, they are NOT using exactly the same playbook this time around when it comes to shrinking the balance sheet.  In fact, rather than 2 years, it looks like balance sheet runoff could begin only a few months after the first rate hike.

All of the above is a bit sudden as far as the bond market is concerned.  Simply put, traders are rushing to get in position for this new reality.

One other key data point this week was the Employment Situation report for December (aka, the jobs report, or non-farm payrolls).  The jobs data was a bit confusing when it came to the market reaction.  The payroll count fell well short of expectations and that's typically good for rates.  This time around, rates continued to rise to new, long-term highs.

One counterpoint is that although the payroll number was lower, other aspects of the report were solid.  These included the 3.9% unemployment rate and stronger than expected wage growth.  Low unemployment rates are occasionally explained away by drops in labor force participation, but in this case, there was no drop.  Moreover, the age demographics of the unemployment numbers were also economically encouraging. 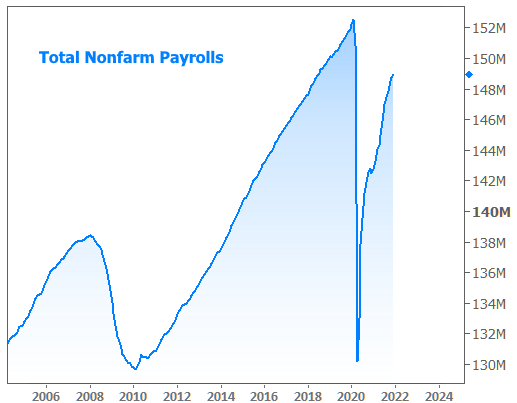 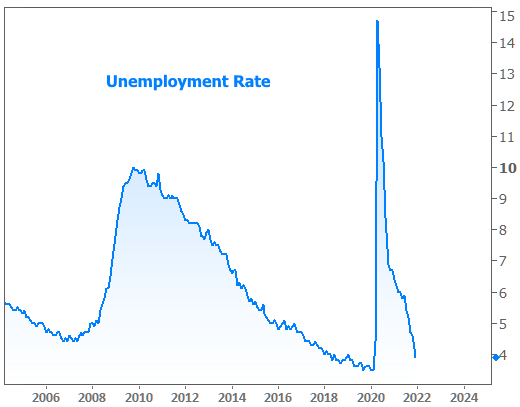 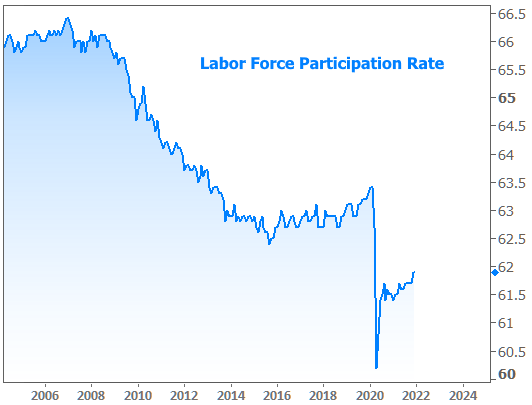 Ultimately though, the most important part of the jobs data was that it wasn't discouraging enough to raise any major objection to the Fed's message from earlier in the week.  Until Friday morning, some traders may have been holding out for that.

The bottom line is that a very big, very important, and relatively abrupt "repricing" of expectations is taking place. It has to do both with omicron's impact and the Fed's policy outlook. Batten down the hatches, etc. Things could get worse before they get better. 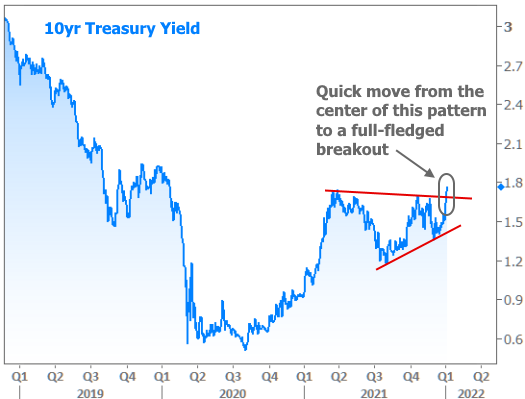