MBS Live Week Ahead: How Low Can Rates Eventually Go?

The bond market begins yet another week with rates in a holding pattern at historic lows.  With coronavirus being the primary motivation for rates, it wouldn't be a surprise to see indecision continue until we get a clearer idea of how things will shake out with respect to the pandemic vs the global economy.

In fact, apart from the all-time low mortgage rates, things have been downright boring when it comes to the underlying bond market driving those rates.  Absent a vaccine-related breakthrough, there's not much for the bond market to do besides hurry up and wait.  After all, even if there is amazing news about a vaccine trial, that's only worth a smaller-scale, shorter-term bump for markets until the stuff actually makes it into widespread circulation and proves its worth.

Between now and then, we can expect to see the bond market drift in a similar range and make modest course course corrections depending on the covid outlook.  We can also dig into the nuts and bolts of the mortgage bond market to ask and answer questions about how low rates can eventually go.  The answer is actually surprisingly simple.

The lowest conventional 30yr fixed mortgage rates would have a very hard time falling below 2.25% unless covid immunity proves to be impossible.  This isn't a guess or a prediction, like most comments about financial market potentialities.  Rather, it's simply the hard floor based on the structure of the mortgage bond market--at least for now.

MBS (the mortgage-backed-securities that serve as the foundation for mortgage rates) come in different coupons.  A coupon is just a fancy word for "rate of return."  Depending on the interest rate, a mortgage loan can only be slotted into a few MBS coupons.  Coupon rates are offered in 0.5% increments.  These rates are different than mortgage rates.  For instance, a mortgage rate of 3.0% leaves far less than a 3.0% rate of return for an investor.  Fannie and Freddie will take about 0.50% of that for their guarantee fees.  Then 0.25% of that is typically set aside for whoever services the loan.  The investor gets the remaining 2.25%--something the industry refers to as "the clip."

It also means that the lowest possible mortgage rate at any given time is the one that is 0.25% above the lowest available MBS coupon.  Reason being: MBS coupons have to EXIST and they have to actually be trading in great enough numbers for lenders to originate loans intended for that coupon.  If there's one "why" that answers the question of how low we can go, that would be it.  Think of it like a car company building a car that they weren't sure there would be demand for.  It's not the kind of thing that happens in any meaningful way.

And here's the final piece of of the puzzle: the lowest 30yr fixed MBS coupon that exists right now is the 2.0, and that's a tremendously recent development.  It's also a development that the industry resisted quite a bit until it became inevitable.  That's pretty common actually.  Investors don't want to be stuck holding a rate of return that's much lower than the rest of the market in the event that rates move back up.  New, lower MBS coupons are only uncorked if they become absolutely necessary.  This is one of the reasons rates bounce big and hard at 3.25-ish when they hit all-time lows in 2012 and 2016.  That was as low as rates could go without 2.5 coupons being more prevalent, and at that time, they were rarely traded.  You can see these bounces in the chart below at the "3.0 coupon cutoff." 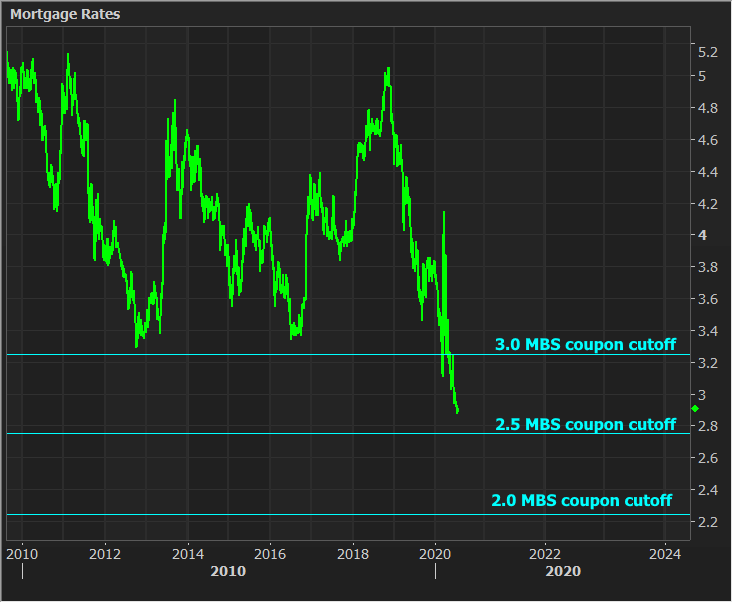 Post-covid, and we've moved very quickly toward ther 2.5 coupon cutoff.  The chart above is just for the average lender.  Aggressive lenders are already offering 2.75% rates (the lowest rate that can go into a 2.5 MBS coupon).  And those same lenders are also offering rates UNDER 2.75% with buydowns.  That mean 2.0 coupons are fair game right now, and that mortgage rates have a runway that would allow them to go as low a 2.25%.  And odds are that's the lower boundary.

We totally could!  Some day, we probably will.  But it would be a very tall order in the current rate cycle, and it would require the covid situation to get worse and stay worse for a long time.  It will take months for the industry to work its way down from 2.875% to 2.25%, and even that's no guarantee without further deterioration in the outlook for covid or the economy.   The only reason we've been able to fall as much as we have is that mortgage rates had some catching up to do compared to the broader bond market.  They've largely accomplished that mission now. 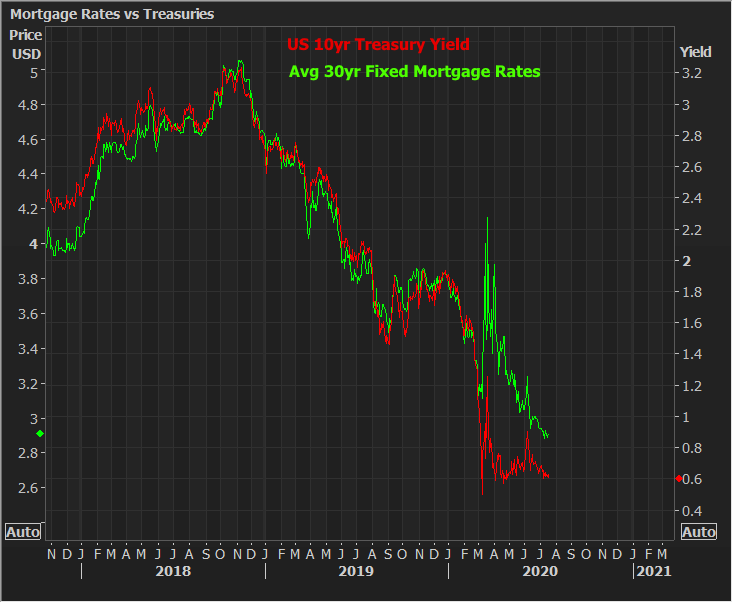 In other words, Treasury yields have been holding in a much more sideways range.  Even if mortgage rates fully close the gap, they still wouldn't be under 2.5%.  That means the broader bond market would need to improve significantly in order for mortgage rates to challenge 2.25%.  That COULD happen, but not in any kind of scenario that most of us really want to live through.