The Federal Reserve's capacity and willingness to engage in aggressive easing measures is often described as a "bazooka."  This likens it to an imprecise and indiscriminate weapon of immense power with a wide area of effect.  Imagine Bernanke, Yellen, and now Powell, atop a hill overlooking the economic countryside, bazooka on the shoulder, scanning for signs of unrest and snuffing them out with monetary firepower.  The analogy works, but it's not the right one this time around.

In the past, the bazooka resulted in both the debt and equity sides of the financial market moving to new extremes.  It wasn't immediate either.  Fed bond buying and ZIRP (zero interest rate policy) were more like contributing factors in a large scale economic recovery that also happened to coexist with historically low bond yields.  One could argue that a lack of inflation and embedded economic issues would have kept rates low anyway, but the Fed's unprecedented level of accommodation certainly didn't hurt.

This time around, the Fed's stimulus efforts are having a sedative effect on volatility much more quickly than they have in the past.  It's as if the Fed has replaced its bazooka with a tranquilizer gun, and has been firing at will.  Sure, if we zoom in close enough, it may look like there's day to day volatility in stocks and bonds--and even push and pull relationship that conventional wisdom views as a rule (i.e. buy stocks, sell bonds, and vice versa). 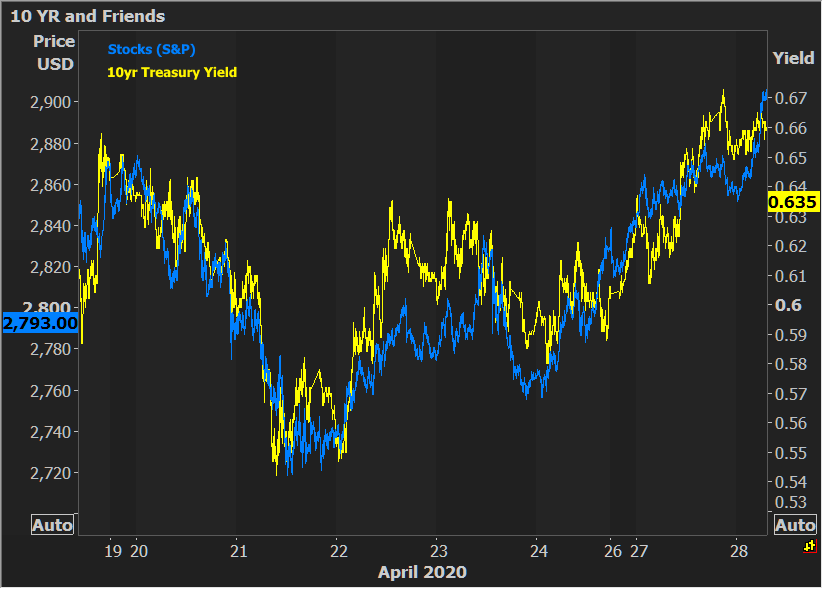 But when we zoom out just a bit, we can see that March 9th through March 20th saw strong negative momentum in both stocks and bonds (i.e. sell stocks AND sell bonds too!).  The 2nd phase of that negative momentum actually came after the Fed's March 15th surprise bond buying announcement.  That's the week that I referred to the Fed as "getting angry," and the fact that you'd like them when they're angry.  They upped their bond buying significantly which helped bonds begin to move lower in yield, and then announced a litany of additional measures on March 23rd.  Stocks responded decisively and haven't really looked back. 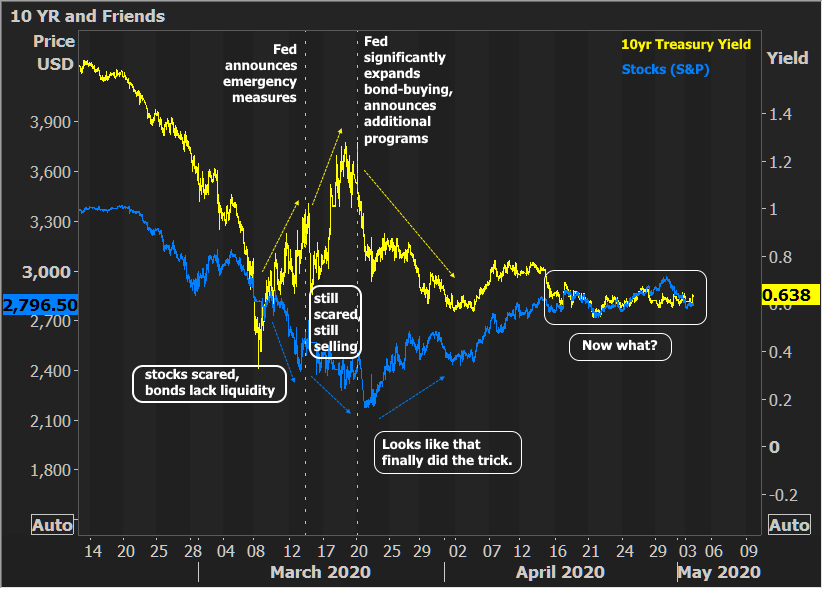 The net effect has been a return to levels somewhere in the middle of March's range for both stocks and bonds.  It's no surprise to see some day-to-day correlation when both have flattened out so much in the bigger picture.  Markets are both asking "now what?"  Is the Fed's new weapon akin to a tranquilizer gatling gun designed to counteract as much of the coronavirus economic fallout as possible until the nation gets back on its feet?

Yes, probably.  It might even work too.  But until that becomes apparent (or not), the intervening time is generally supportive for bonds.  We may continue to see small-scale volatility inside a range, but until and unless we're breaking up and out of April's yield range (let alone March's), rates are low and sideways until further notice.  The nice thing about that from a mortgage market standpoint is that there's some potential for rates to tighten/drop even as Treasuries remain flat.  It's not something that plays out quickly, but it's something to look forward to in a gradual, general sense.

As for this week's specifics, we could talk about the month's biggest slate of econ data culminating in what will be the worst jobs report in history, but the market is more likely to take cues from pandemic-related updates, Treasury/corporate issuance, and momentum/technical trading.