MBS Live Week Ahead: After Last Week's Defensive Stand, What's Next For Bonds?

Last week's bond trading served the role of establishing a ceiling for yields after their biggest spike in nearly a year (and the case could be made that the rate spike in March was an artificial and temporary byproduct of covid-related market dislocations--never destined to last).  In that sense, the post-senate-election rate spike is the biggest threat the low rate environment has faced.

It's hard to make a case for rates to continue higher at the same pace in the short term, but perhaps even harder to make a case for rally of equal proportions.  That leaves us to wonder where the next move will take us, when it will happen, and which of the handful of potential motivations will move to the forefront.

We know the pandemic and the corresponding impact on the economy will be two of the most important drivers.  This, of course, assumes that significant progress on the economy (especially in terms of jobs and inflation) will translate to a policy adjustment from the Fed.  If things are going better for the economy, then it makes most sense for yields to move up and test the pre-covid range boundary at 1.32% in 10yr yields.  But if things don't go as well in the fight against the pandemic, yields could push back to 2020's post-covid ceiling area just under 1.00%. 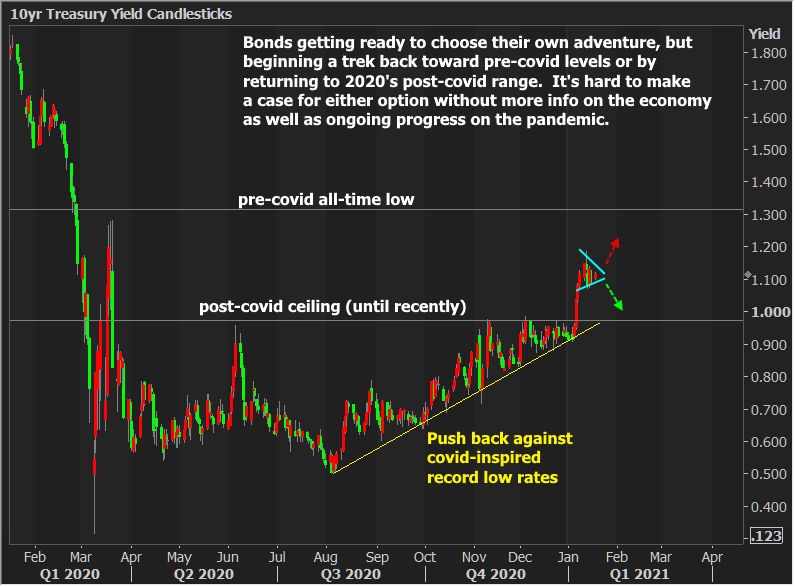 The base case is, and has been, a "slow burn" for the bond market as gradual progress continues apace, for both the economy and the vaccination/covid outlook.  The biggest problem with banking on this trend is simply that bonds don't tend to remain this well-behaved for that long. 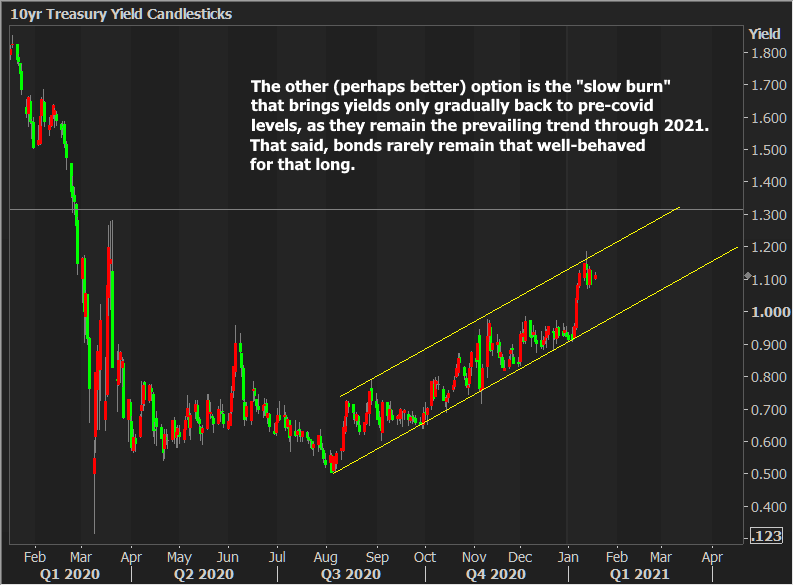 In terms of this week's specifics, we don't have much by way of relevant data to move markets.  There will certainly be some attention paid to the inauguration festivities where "festivities" may include physical violence at one of any number of state capitols.  If the most recent drama in D.C. is any indication, financial markets aren't that interested, but all other things being equal, the most logical reaction to such unrest would be a "risk-off" move that favors bonds and hurts stocks.  Still... stocks and bonds will be far more willing to take their cues from almost anywhere else (earnings season comes to mind for equities).