Bonds On The Back Foot Ahead of ISM Data

As feared, the recent rally in the bond market is quickly proving that it was fueled by a correction from panicked levels surrounding the UK drama in the last week of September rather than some new inspiration to begin a sustainable move lower in rate.  Yesterday's job openings data helped extend modest gains that may have otherwise ended up being modest losses.  We're left in the same position regardless, with the big ticket economic reports likely to set the tone and define the boundaries of the early October range-finding expedition.  Today's ISM data is the second of this week's three biggest tickets with the final big ticket being issued on Friday morning in the form of the big jobs report.

In other news, oil prices have been a hot topic recently due to the expectation and now confirmation of OPEC production cuts (an effort to stem the tide of recent price declines).  It's natural and logical to expect correlation between oil prices and bonds, given their common cousin, inflation.  But in practice, we definitely see pockets of divergent activity. 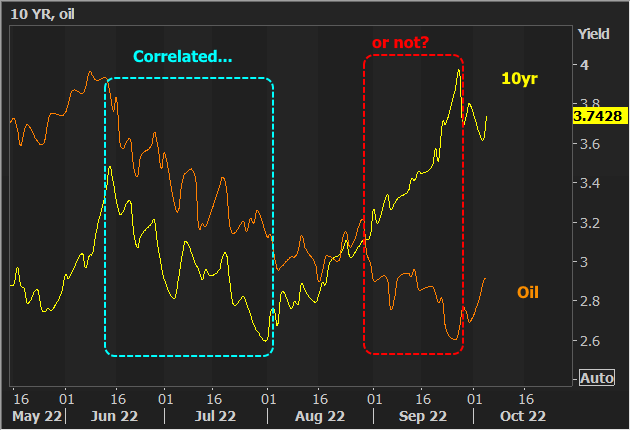 In the shorter term, we're more inclined to see the recent rally in bonds less as a sign of economic fear and more of a technical move back down from the defensive, panicked trading surrounding the UK drama of late September.  That's not to say that correlation with oil couldn't resume for economic reasons, but as always, we're not counting on that being a key guidance giver for bonds (more like "something that often tends to coincide and occasionally doesn't coincide at all). 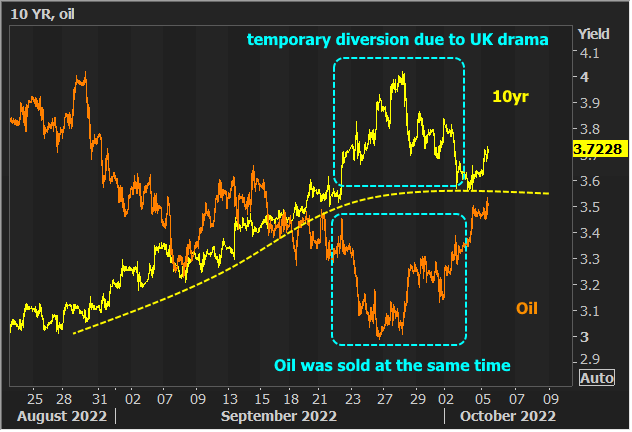