Just When You Thought Bonds Might Calm Down a Bit...

The overnight session was frustrating exercise in "position-squaring," which is a term we often use as a sort of generic, hifalutin way of saying "that's just the way the ball is bouncing."  It does have a foundation in reality though.  If traders have mostly been taking "curve flattening" positions, it means that shorter-term yields have been rising faster than longer-term yields.  If traders then "square" (or, more simply, "close/cover") those positions, it implies longer-term bonds losing ground relative to shorter-term bonds.  Case in point, today begins with 10yr yields up almost 9bps to new 11-year highs of 3.581 while 2yr yields are up only 3.3bps.

This isn't the only way to approach the weakness, however.  While anecdotal reports from traders confirm the position-squaring phenomenon, there was also bona fide bond bearish data in the overnight session with yet another record-setting inflation report in Germany that kicked off selling pressure in EU bonds.  A bigger-than-expected rate hike in Sweden wasn't necessarily a key consideration for global markets, but it didn't help.

With the Fed on deck tomorrow and the market having moved fairly rapidly since last week's CPI report to price in higher odds of a bigger rate hike, it's only natural that we've seen more upward pressure on shorter-term bonds.  At some point, the nearness to the Fed decision limits the room that short-term bonds have to run, thus leaving more room for longer-term yields to run.

The following chart plots 2yr vs 10yr spreads (aka "the curve").  It's currently inverted (i.e. 10yr yields are lower than 2yr yields), but let's just focus on the movement.  When it's moving lower, 2s are rising relative to 10s.  We'll call this "flattening" even though it would only technically be flattening if 10s were still higher than 2s.  "Invertening" doesn't have the same ring to it... 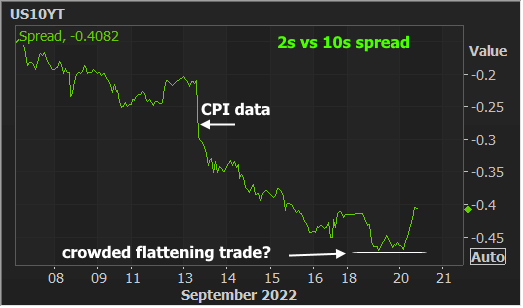 Long story short, traders moved quickly to price in even more pain for the short end of the curve (remember, the short end is more closely related to the Fed Funds Rates, so if traders see the FFR moving higher more quickly than before, 2s should indeed take more damage than 10s).  Fed Funds Futures priced in about a 20-25bp upgrade in the outlook over the next year, so the 25bp move in the yield curve makes decent sense, as does the resistance seen when it hit -0.45.  That resistance could be one of the things that explains today's outsized losses in longer-term Treasuries.

In other news, let's check back in with MBS coupons.  We receive a lot of questions as to why we follow 4.5s still, even though they are trading just over 97.  For what it's worth, 5.0 coupons are getting closer and closer to taking the lead, but we'd want to be sure we weren't seeing some sort of correction after tomorrow's Fed announcement.  Even then, 4.5 coupons have a lot more depth and still have a bit more 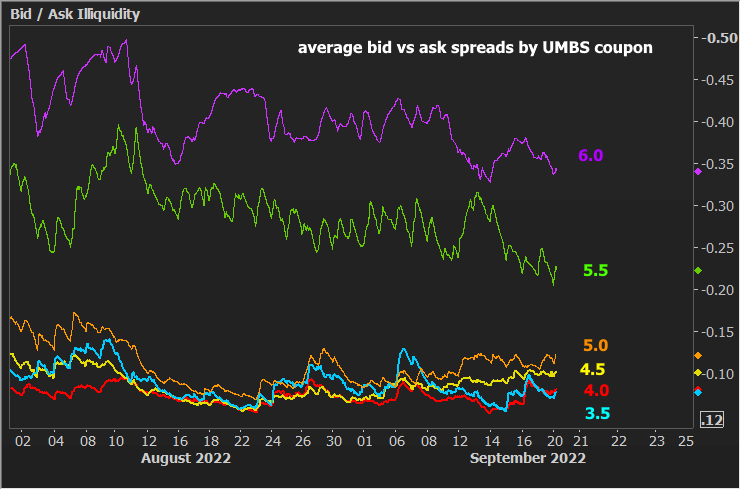