The entire week has been dominated by a close correlation between stock prices and bonds yields.  This has been especially noticeable after 9:30am ET on any given day (the NYSE opening bell, when more liquidity and volume hit the market), but even outside those hours, there's been enough correlation that it makes sense to keep an eye on stocks at the moment.  It also serves as a reminder that this week's bond rally may be more fragile than it seems, depending on what the stock market does next.

In fact, there is already one subtle sign of that fragility.  It can be seen in the following chart which shows the strong correlation mentioned above.  The subtle part involves the variation in bond behavior at the various low points for stocks.  Specifically, if the correlation were perfect, bond yields would bottom out around the same level at the same time that stocks were hitting their own lows.  A relatively flat line can connect the low points for stocks.  Bonds on the other hand did better than stocks suggested on the 19th and slightly worse on the 20th. 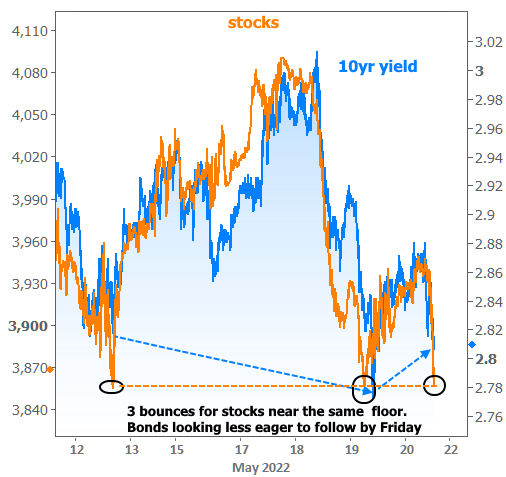 Should we read much into this?  Not really.  Correlation such as this is typically only made possible by very small time horizons.  If we zoom the chart out (but maintain the same y-axis scaling used in the chart above), we can see the general trend has been for stocks and bonds to lose ground together since the big shift in the Fed's policy stance in early 2022.  The reconnection is relatively recent, and we wouldn't expect it to be perfectly correlated from here on out. 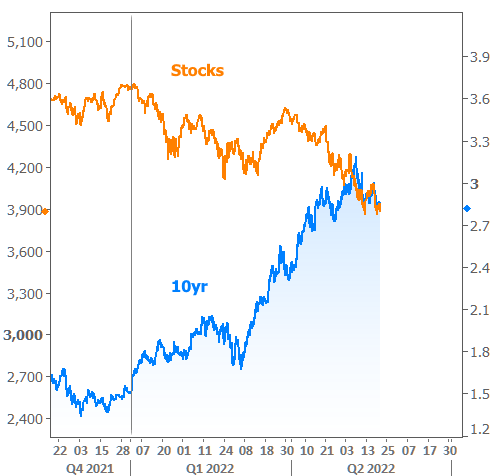 Even if we're not expecting the lines to remain right on top of each other, we can still glean some insight from their relationship.  Going back to the first chart, we can look for similar divergences.  In other words, if stocks make additional lows, and bond yields failed to do the same, one conclusion would be that bond traders are increasingly hesitant to chase the stock sell-off.  That would make us feel more defensive about potential losses in bonds.  Conversely, if bonds manage to make new lows (in yield) without the help of stocks, we might feel a bit more optimistic.