MBS Live Morning: Time to Move The Goalposts on The Trend?

Remember when the Fed began to abruptly revise its policy tightening pace at the start of the year and both stocks and bonds began to sell off?  That's the logical play for markets when the Fed ratchets up its tightening pace, but by the end of March, stocks were able to bounce enough to allay fears about the onset of a bear market.  The bounce proved to be a dead cat, and 6 weeks later, the bear is at the door or already in the living room if you ask the NASDAQ.  Even the S&P (via futures) is at the -20% mark vs late December highs this morning. 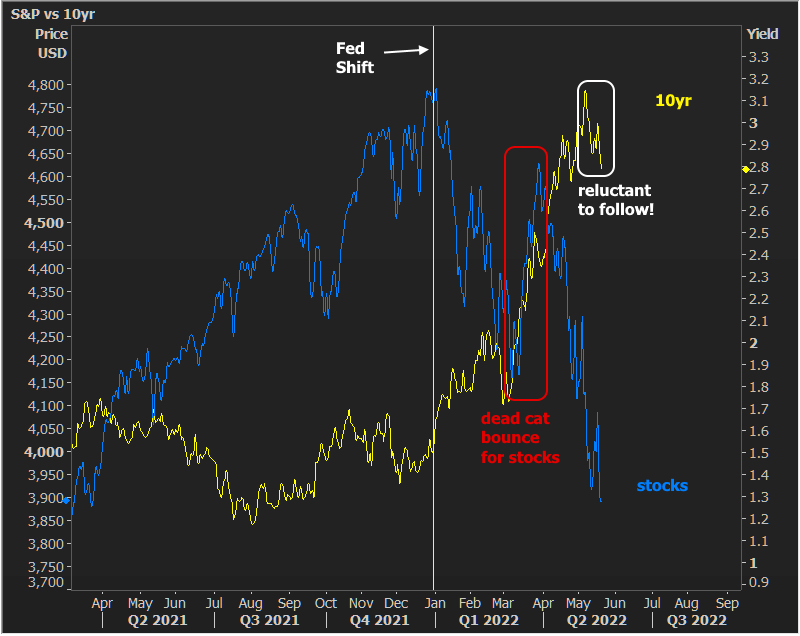 The big stock swoon is helping bonds, but it will need to coincide with legitimately lower inflation if we're to yields decline even half as quickly as stocks prices. That said, with the help of Thursday AM data (and overnight stock weakness) yields have fallen enough to question the trend that was intact as recently as Wednesday afternoon.  In so doing, we're likely to find that it's more appropriate to move the goalposts than to conclude the ideas that underlie the trend are no longer relevant.

Moving the goalposts has a shady connotation.  No one likes playing a game where the rules can be changed in the middle, but don't think of the bond trend that way.  The purpose of the trend is to capture an idea and measure its progress.  The idea in the case of the previous trend was that, although bond yields have been moderating, they remained under a bit of pressure as markets wait for inflation data to play out in the coming months.  Now that stocks are digesting China's covid lockdowns, and other global growth concerns, bonds are simply under a bit less pressure.  Either way, moving the goalposts is actually a necessary step in order for our baseline outlook of a choppy, sideways range to take shape. 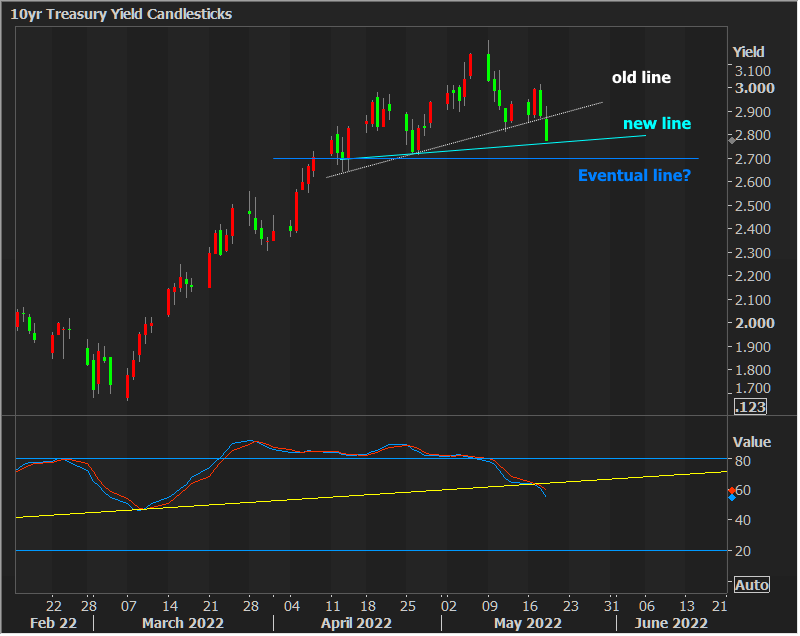 In other words, maybe we'll be talking about the blue "eventual line," or some other nearby horizontal level as the next location for the goalposts.  A warning though: for now, friendly developments in the trend are heavily dependent on large, ongoing losses in stocks.  If stocks manage to find their footing and bounce in any sustainable way, bonds probably won't like it.  The exception would be over the longer run (a few months out) if stocks were bouncing because inflation data improved faster than expected and the Fed surprised the market by acknowledging it that quickly.  Bottom line: this is "nice" for now, but there can't be a big, sustainable rally in bonds without compelling signs that inflation is on course to return to normal (or close to it).