MBS Live Morning: Friendly Friday Trends; Checking In With MBS; How About That Yield Curve?

With this week's Fed announcement in the rearview and no other earth-shattering developments in data or geopolitics, bonds are left to the sort of consolidation trend that they've rarely been able to achieve in recent weeks.  Despite the volatility, a decidedly consistent and friendly trend is emerging on Fridays. Today is shaping up to add to that trend.

Unfortunately, there hasn't been a clear implication for how the following Monday will turn out.  But if we change the chart to a minute-by-minute interval, the past week looks like our best chance yet of finding some sort of ceiling.  At the very least, it's the best organic consolidation we've seen (where "organic" means that the gains didn't require some new, unexpected bond buying motivation, but rather occurred naturally as higher yields helped buyers and sellers find a better balance).

That's the Treasury market though, and it's the long end at that!  Shorter-dated Treasuries (like the 2yr) have been doing much worse because they're much closer in duration to the Fed Funds Rate.  In other words, the Fed's rate covers a 24 hour lending time frame, 2yr Treasuries = 2 years, 10=10, etc.  Here's what the market thinks of the Fed's overnight rate: 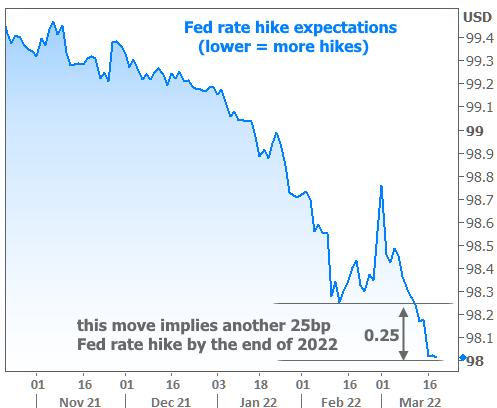 In other words, this week's Fed announcement helped the market understand that the fallout from the Ukraine war does nothing to slow down the rate hike outlook.  If anything, the Fed is concerned it will only add to inflation, thus forcing even faster rate hikes.  Moving out the curve, we see this play out with 2yr Treasury yields rising much faster than 10yr yields.  The lower the line in the following chart, the lower 10s are compared to 2s. 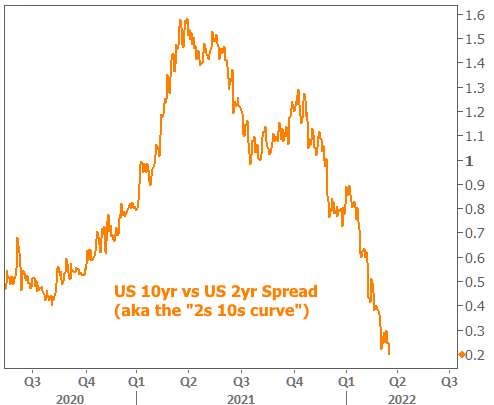 The 2s 10s curve (or "yield curve") is often discussed as a surefire recession indicator when the orange line goes below zero (aka "inverted yield curve").  If the current trend continues, it won't be long before the curve inverts again.  But is it a surefire sign of recession?  All we can know is that it has generally been this way in the past.  We don't really have any great examples of curve inversion in the age of quantitative easing (the Fed's big bond buying campaigns).  2019 is the only candidate, and we'll never know if that microscopic curve inversion would have brought about a recession because covid happened a few months later (and the impact on the economy would have been largely the same regardless of the yield curve).  One thing we CAN observe about the yield curve is that the size of the inversion does NOT correlate with the size of the recession.  So at the very least, this may be an imperfect predictive tool, but only time will tell. 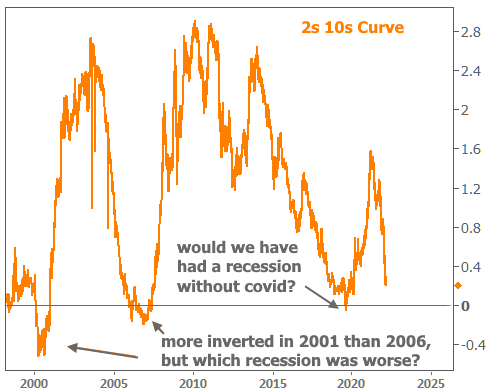 One thing we definitely know is that mortgage rates will be doing worse than 10yr Treasury yields when we have a flattening yield curve amid a rising rate environment.  In other words, mortgage rates will be rising faster.  That's because the average mortgage isn't seen as lasting nearly as long as 10 years right now (the expectation is that rates will come down enough before then to make refinancing attractive).  As such, mortgages tend to behave more like shorter-term Treasuries.  For instance, they've done much better versus 5yr notes than 10s. The following chart shows the spread between 30yr fixed mortgage rates and Treasury yields (5 and 10).  Apart from the crazy days in early 2020, mortgages are doing worse vs the 10yr than at any other time in the past decade, but are in roughly the same shape as 2015-2017 compared to 5yr notes. 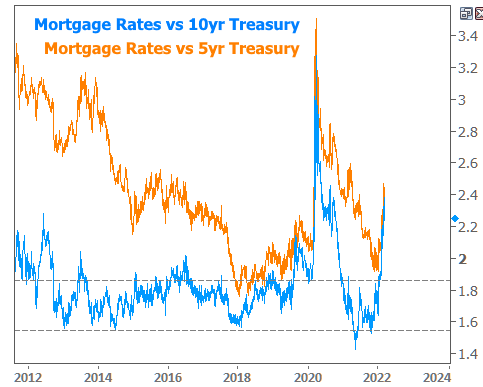 Are lenders being greedy?  Actually, no.  The following chart shows the average 30yr fixed rate versus mortgage-backed securities (MBS) levels.  The lower the line the tighter lender margins are, in general. Due to increased costs that hit the market after covid, we wouldn't expect a quick return to the historical baseline, but other than that, margins are as tight as they've been since the start of the pandemic. 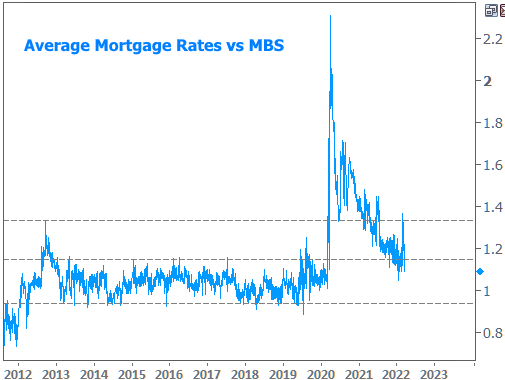 The takeaway is that the issue for rates is not one of lender behavior, but rather of MBS underperformance.  To bring all this home, the following chart shows how MBS (the bonds that directly dictate the rates lenders can offer) are doing versus a blend of 5 and 10yr Treasury yields (thought to be a good benchmark for mortgage bond valuation). 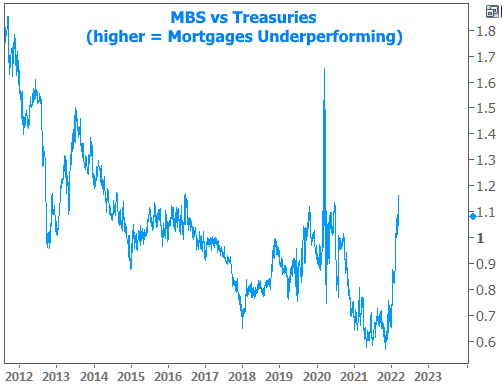 As we've frequently discussed, feel free to disregard the big spike in early 2020 as it was a one-off aberration that will hopefully never be seen again.  The takeaway is that mortgage bonds are at their worst levels versus Treasuries since early 2014.  Moreover, they've just endured one of their most abrupt spikes of weakness... ever!