Slower Start; Consolidation Ahead of CPI

The Consumer Price Index (CPI) spent nearly a decade being ignored as a market mover due to an absence of any interesting momentum in inflation.  That changed in a big way in 2022 and it now trumps even the mighty jobs report when it comes to economic data that influences the bond market.  As the next CPI release approaches on Thursday morning, bonds have essentially been consolidating last week's gains.  In fact, the midpoint of today's trading is the same as the midpoint for the week so far which is in turn the same as the levels achieved during Friday morning's rally.  This is the bond market's way of utterly and completely confirming CPI anticipation/indecision. 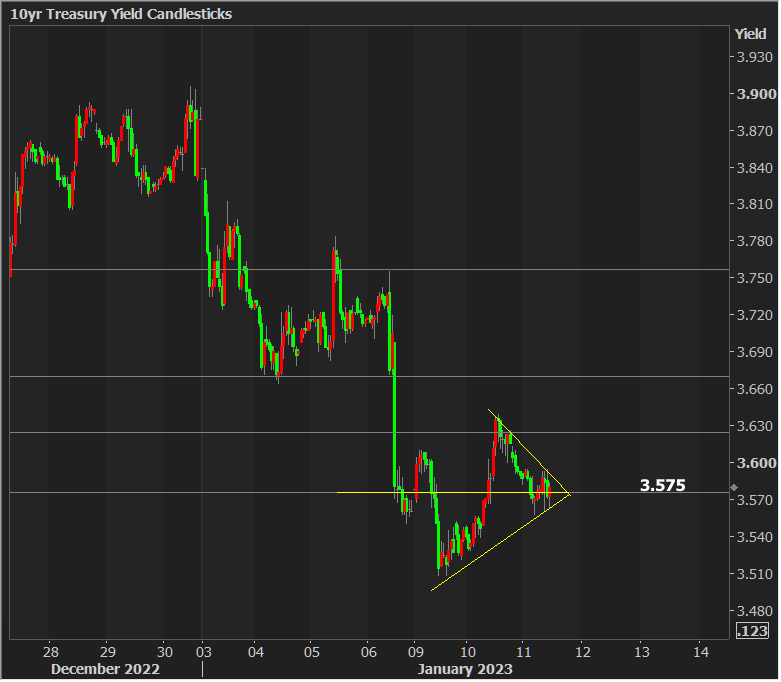 None of the above means that rates are unable to break outside the little consolidation pattern seen in the chart above, but when and if they do, they're less likely to move above yesterday's highs or below Monday's lows.  After CPI, those highs or lows will almost certainly be challenged, even if the results are as-expected.  There are simply too many traders ready to trade that data.

Today's 10yr Treasury auction at 1pm ET is the only scheduled event that would rank as a solid potential market mover.  Here too, it's unlikely that it would challenge this week's trading range, but it could create some volatility inside that range.