Much of 2019 has been "interesting" from an analytical standpoint.  Things were happening.  Markets were reacting.  Movement was big and directional.  Even as recently as 2 weeks ago, we had quite a lot to talk about with respect to the important rate ceilings in the 1.9% range being broken (10yr Treasury).

Hindsight made it clear that the potential range breakout had more to do with the calendar and the confluence of a few one-off events.  When the smoke cleared, it had merely clarified the upper boundary of the current range.  But in so doing, it also confirmed just how range-bound the bond market is.  Apart from the first part of October and the 2nd week of November, yields have been trading a range of 1.67 to 1.86 for well over 2 months now.

This makes good logical sense, unfortunately.  Bonds need to know how the economy is going to evolve, what the Fed's going to do about it, and how a trade deal may inform all of the above.  Unless traders are willing to speculate that a trade deal is a done deal and that it heals all economic fragility, there's no sense launching yields into orbit just yet.  Conversely, the potentially positive economic shift afforded by a potential trade deal (after all, we hear constant reports of certain businesses holding back due to uncertainty) means it makes even less sense to buy bonds relentlessly.

The frustrating thing about all this is the timing.  With a key tariff deadline almost a month away and a strong possibility that the appearance of progress creates the opportunity to extend the timeframe, AND with the winter holiday season making it harder for market participants to gauge what's real (vs what's driven by year-end trading strategies and illiquidity), we may well be on hold until the 2nd week of January before having a clearer sense of where we're headed.  At the very least, November is a dud when it comes to offering such clarity.  We need to see the first week of econ data in December at the very least.  Even then, that econ data can be taken with a grain of salt if traders assume that even an average outcome on the trade deal would provide a fundamentally different set of inputs.

All that can be done in such environments is to play the role of security guard for the range.  We can watch the cameras for any significant movement and keep an ear out for any trade tweets.  As far as guarding the range is concerned, here are a few of the most relevant technical levels at the moment: 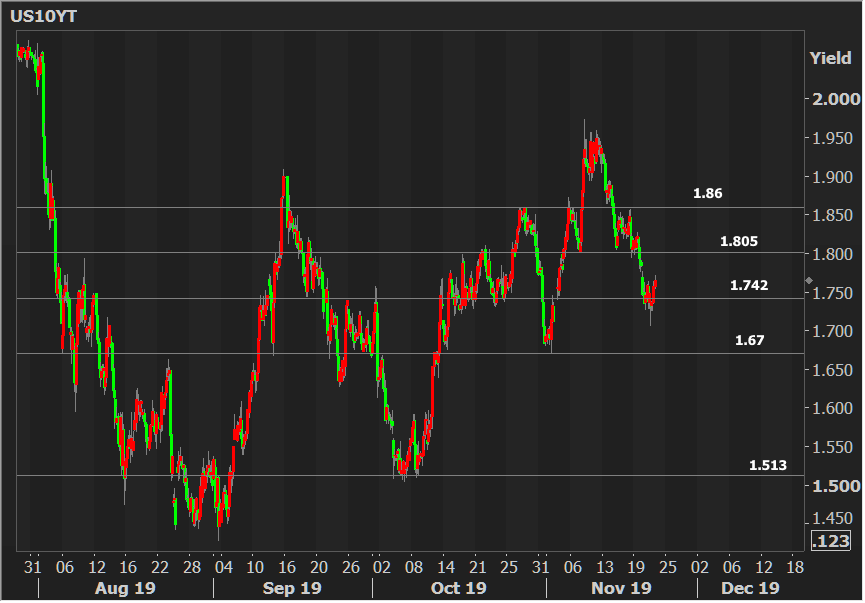