MBS Live Day Ahead: A Con For Every Pro, But No Major Drama

The bond market has entered a period of consolidation after the recent run up toward 1.0% in 10yr yields.  Whether we're looking at the market action itself or the underlying fundamentals most likely to inform movement, "yeah buts" abound... a con for every pro.  Fortunately, at least one of these pro/con pairs is so "big picture" that it serves to limit the overall volatility (hint: short-term covid impacts vs long-term vaccine impacts).

But "Covid vs the economy" is really more of a backdrop against which smaller scale volatility will play out in the coming year.  The "backdrop" could involve a 10yr yield range of more than 100bps while the "smaller scale volatility" is quite limited depending on the time frame in question.  If we're talking about a single month, June, August, and October were each in the 30bp neighborhood.  Moreover, June ended up being a rally month, and August was only as bad as it was because it followed the bond market's strongest post-covid month (assuming March was "initial covid shock month").

Entire months of trading are easy to discuss as long as they've already happened, and risky to discuss if they haven't happened yet.  All we can know right now about the path ahead is that there seem to be points and counterpoints for every little market mover.  Here are a few in play this week:

Pro: This week's trading has seen 10yr yields bounce back nicely after last week's run up toward 1.0%.
Con: They haven't been too eager to surge back toward lower levels.

Pro: It looked like we were breaking the next technical level on Tuesday and confirming that break this yesterday morning (at .87+).
Con: Yields were back up to .89% in the afternoon.

Pro: The Fed is talking about the economy in a way that suggests they'll tweak their bond buying program to offer more accommodation at their next meeting.
Con: They're also talking in a way that would help them justify sitting on their hands.

Pro: Today begins with bonds, once again, trying to confirm a break of the .87/.88 level
Con: But overnight trading was timid and the rally lacks conviction for now

Bottom line, bonds are consolidating in a modestly stronger direction, but only after testing their weakest levels since the start of the pandemic following the Pfizer announcement 2 weeks ago.  There's not much more "hope" than strong vaccine trial news, so we'll turn to the usual suspects (i.e. econ data and the Fed) from here on out.  The only other major consideration for bonds will be the ever-changing shape of the Treasury supply picture.  With that in mind, bonds are likely to remain sensitive to any significant stimulus-related headlines, and especially sensitive to the Georgia senate races (I personally have no idea what the chances are of a democratic sweep, but to whatever extent that's possible, it would almost certainly add upward pressure on rates). 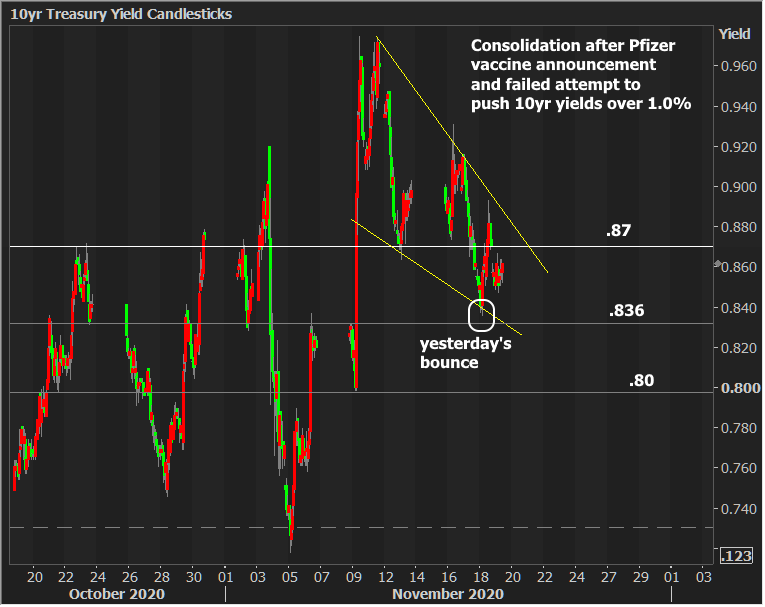