MBS Live Day Ahead: Another Chance to Watch MBS Suffer

In the day just passed, bonds jumped out to an early lead in the overnight session on another incremental installment of trade war brinksmanship.  China hiked tariffs on $75 bln of US imports and Trump fired back with a 5% bump to tariffs on $300 bln in Chinese imports.  All of the above resulted in 10yr yields running to new multi-year lows at 1.443--notably only a skip and a jump away from all-time lows at 1.321%.  Before the domestic session began, Trump said friendlier things about a potential trade deal at the G7 summit.  With that, bonds returned to unchanged levels and held mostly sideways from there.

Well, Treasuries held mostly sideways.  MBS thew a little tantrum and stormed off toward noticeably lower levels in the afternoon.  That's a surprise considering the relative stability in Treasuries, but traders are citing increased supply yesterday afternoon with an absence of buyers (who are said to be waiting for the end of the week to get what they need for August's month-end trade).

In the day ahead, we'll cross our fingers that each passing day brings us a bit closer to healthier levels of demand in MBS.  The charts below offer a couple different ways to monitor the weakness.  The first simply plots 30yr fixed rates vs 10yr yields (on separate axes, in order to more easily see the divergence--i.e. please note that mortgage rates are not anywhere close to 10yr yields simply because these two lines are touching each other on this chart). 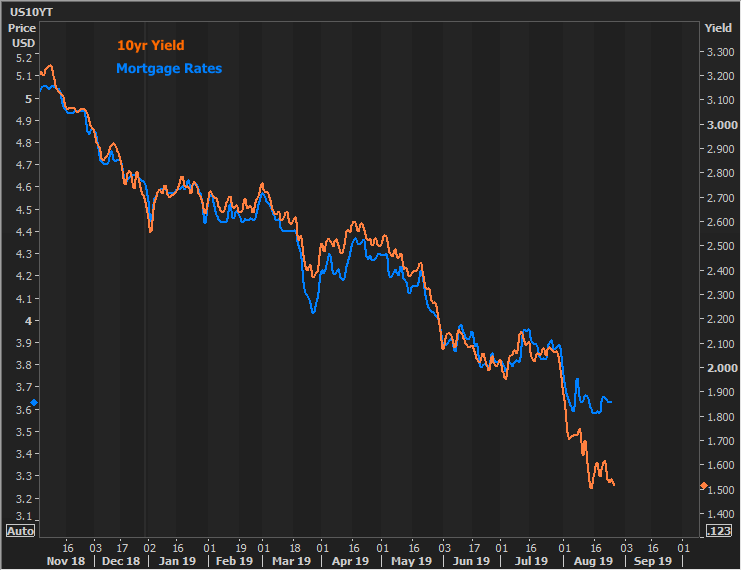 Frankly, the chart above doesn't look too bad.  Sure, rates have ground to a halt over the past 2 weeks while 10yr yields continue lower, but at least mortgages are also at their long-term lows.  Things get worse when we take a look at the 30yr MBS current coupon yield spread vs Treasuries.  This offers a single line to view the relative performance of the MBS market.  The higher the line, the weaker MBS are compared to Treasuries and the less generous lender rate sheets can be.  10yr yields are included only as a reference below (but note that MBS spreads have blown out both during big rallies and big sell-offs). 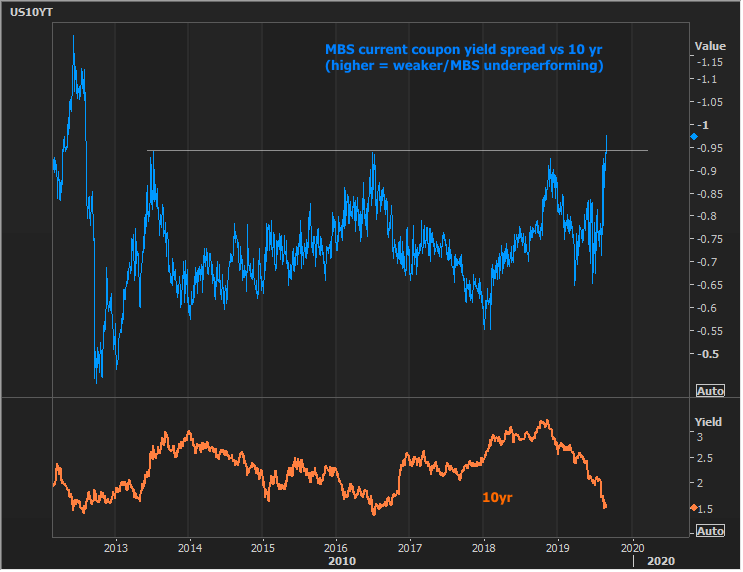 Perhaps MBS traders are thinking one step ahead.  The yield curve begins the day at its most inverted levels of this economic cycle (since mid 2007), and 10yr yields seem almost immune from whatever it may be that's leading other parts of the market back toward risk.  If yields keep falling (and by all rights, it looks like they will), then it doesn't make much sense for MBS traders to step in with stronger buying demand just yet.  Waiting for shoes to drop... 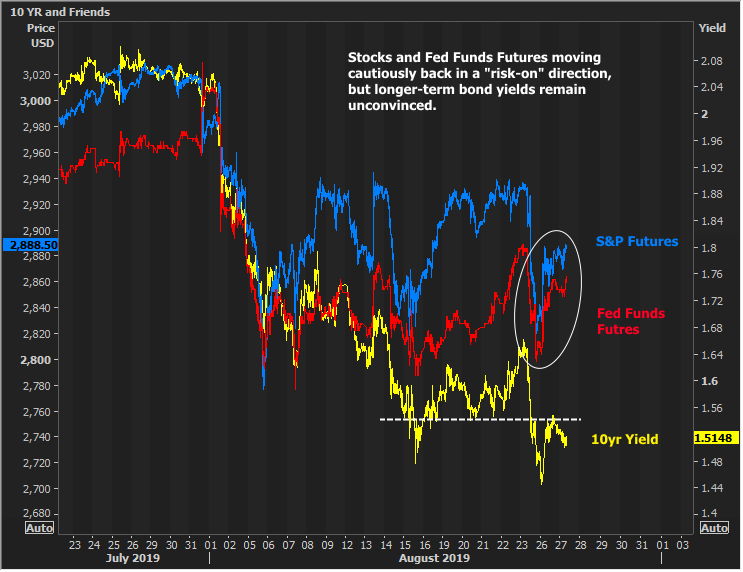 The day's only significant data (potentially) is the Consumer Confidence number at 10am.  The 2yr Treasury auction kicks off this week's Treasury supply, but tends to have less of an impact than tomorrow's 5yr auction.  In this environment, however, there's a greater chance of at least some reaction.