The Fed has increasingly been discussing its tapering strategy.  They haven't been shy about saying so.  In fact, at least 5 members have vocally supported announcing tapering in the September meeting if jobs gains continue at the current pace.  But that's just the 5 who've opted to speak up.  There could be a few others who share that sentiment, and today's Fed Minutes would help the market get a better sense of the number a week before Powell adds even more clarity (hopefully) in Jackson Hole.

Even if that number is surprisingly high, we should also consider what has transpired since the Fed's meeting. Here are a few highlights:

There are only a few notably strong economic reports to offset the negativity (Core PPI 6.2 vs 5.6 previously, big gains in ISM non-manufacturing, and of course the super strong jobs report).

Away from economic reports, and perhaps one of the most relevant considerations is the surge in covid stats.  Weekly new cases have roughly doubled.  Deaths have more than doubled.  School is starting back up (pros and cons here).  There are significantly more breakthrough cases and these account for an increasing percentage of hospitalizations.  Some hospitals are full enough to prompt new lockdown measures. Finally, on a non-covid-related note, there are vastly different geopolitical risks.

All this to say that the Fed's "frozen-in-time" comments from 3 weeks ago are missing a lot of recent context.  Of course they'll still provide a window to the Fed's thought process and, thus, can still have an impact in the short term, but savvy market participants care far more about how Powell will qualify that thought process next week.

To be sure, inflation is a secondary concern, if you ask the market (i.e. market-based inflation expectations have been hovering sideways around 2.375% after being higher than 2.5% in May 2021).  This coincides with a similar hovering in 10yr yields themselves in the 1.15-1.40% range.  Nothing is really happening in the bigger picture until we're moving well outside that range. 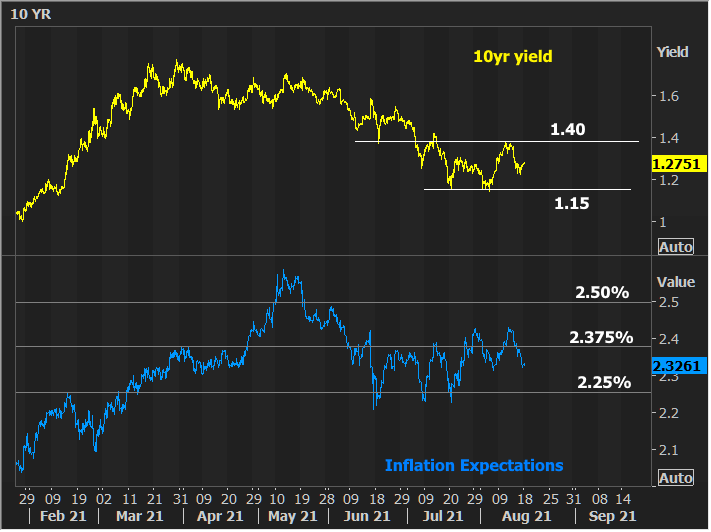