MBS Live Day Ahead: Today Could Be The Day

Bonds have recently been on a rather sharp selling spree leading up to and away from last Friday's jobs report.  After that it was the following Wednesday (today) that stood the best chance of letting us know where we stood due to the confluence of the CPI data and the 10yr Treasury auction.  The day begins with CPI coming in as-expected, and the bond market erasing overnight weakness.  If the strength (or even stability) can persist after the 1pm Treasury auction, today will increasingly look like the first case for a supportive ceiling against the recent uptrend in rates.

AM highs of 1.374% line up well with the 1.37% pivot point from early July.  That's the first option for a defensive stand today.  If that's broken, bond bulls would hope to see support kick in before breaking the next significant level at 1.44%. 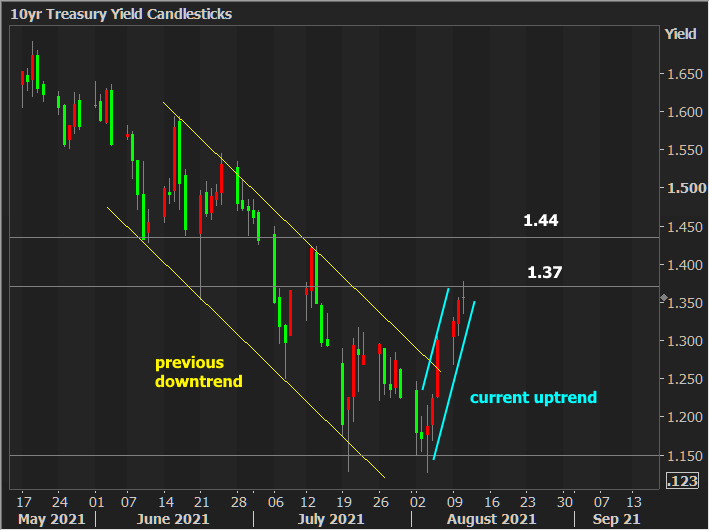 With CPI out of the way, the key consideration will be the afternoon's 10yr Treasury auction and the general success (or lack thereof) of the market's ability to digest heavy supply.  In addition to Treasuries, the corporate bond supply environment has been an issue so far this week with more than $20bln of new issuance in the past 24 hours (anything over $10bln is a big day).

The passage of the infrastructure/social spending bill by the Senate is a non-event.  Bond traders have long since priced it into current levels.  Final passage may be worth some inconsequentially small amount of movement, but not remotely enough to alter the prevailing trend.

In the run up to the Treasury auction, don't be surprised to see some volatility.  It's slightly more common for yields to move higher in the hour or two ahead of an auction.  The results will be out at 1:01:30pm ET, approximately (on the calendar for 1pm sharp, but it takes another 90 seconds or so for results to hit).  That's when we'll be comparing the awarded yield to "when-issued" yields (the market's way of betting on an auction outcome, for lack of a more complicated explanation).

We'll also be looking at how the auction's stats (particularly the bid-to-cover ratio) compare to recent averages.  A stronger than expected auction should help reinforce a ceiling overhead or vice versa (weak auction suggests higher yields).  If markets make a counterintuitive move instead, it would reveal quite a bit about underlying psychology.  Bottom line, the market movement itself matters more than the auction results.