MBS Live Day Ahead: Time For Non-Farm Payrolls, A Report That Used To Matter

No other piece of scheduled monthly economic data has a better track record of influencing the bond market than nonfarm payrolls.  There are stretches of multiple consecutive months where it has arguably been responsible for setting the trading tone for the entire month.  It began to lose its potency as a market mover when the labor market got "boring" in 2016-2019.  Unemployment was so low and job creation was so steady that traders would have needed to see several successive months of surprising job losses before betting on anything other than a continuation of the bulletproof labor market.

Then came covid, and the US economy lost more jobs more quickly than at any other time in history.  Suddenly, the jobs report had a chance to be relevant again as it might serve as an indicator of the economy's ability to push back against covid and quarantine measures.  That rationale was vetted in early June when both ADP Employment (a report that attempts to predict NFP) and NFP itself came out much stronger than expected.  Bonds jumped in yield fairly quickly in response, but covid numbers weren't far behind.

With covid back on center stage, July's balmy jobs report did essentially nothing to move markets.  Since then, most of the anecdotal evidence points to a slower pace of job growth, and some traders are even expecting today's number to be in negative territory despite the 1.6 million job forecast. 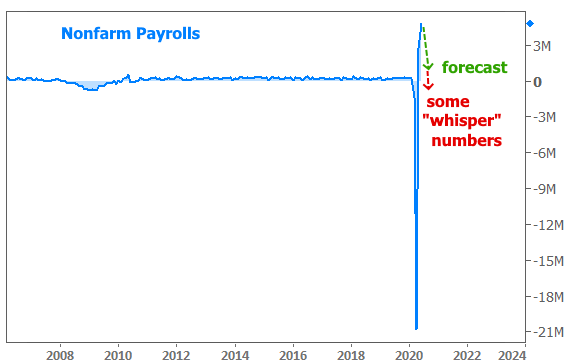 Is the bond market ready to listen to any big departure from the forecast, or will it need quite a bit more by way of details before rounding out its assessment of the labor market?  My money's on the latter.  The covid saga is very much ongoing and I don't imagine one report is going to do much to shape the broader consensus.  That's not to say we couldn't see a market reaction today.  That's always a possibility with this report.  But whereas pre-2016 NFP reports could have easily pushed bonds in either direction out of their prevailing downtrend, it would be a big surprise to see such a thing happen today. 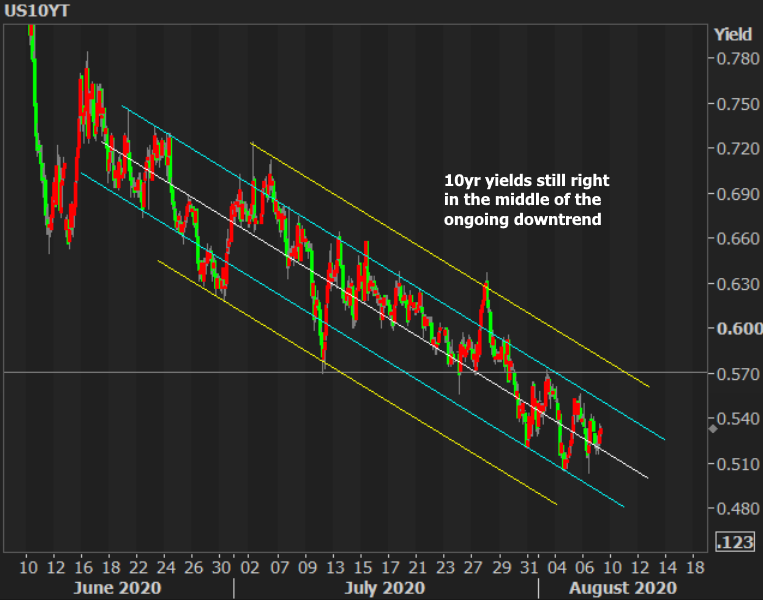