MBS Live Day Ahead: Volatility Goes Both Ways; Does Inflation Help or Hurt?

Due to the presence of bigger ticket economic data (among other things), it was fair to expect more volatility in the current week compared to the previous week.  But volatility goes both ways and the new week is starting out with "the good way" for bonds.  Traders seem willing enough to react to economic data right out of the gate.  That implies the rest of the week could be just as interesting.

Of specific interest this morning is the noticeable drop in the "prices paid" component of the ISM Manufacturing data--the biggest drop since the start of the pandemic.  Granted, in outright terms, prices are still at levels not seen since before the financial crisis (and even then, only briefly), but it was nonetheless a big enough drop to make a case for the top being in.

We can confirm the market views this as a relevant inflation anecdote based on the reaction in market-based inflation expectations (the spread between nominal Treasury yields and their inflation-protected counterparts).  That spread represents the additional yield one would need to earn on Treasuries in order to break even after inflation.  The blue line below shows the so-called "breakeven" for 10yr Treasuries. 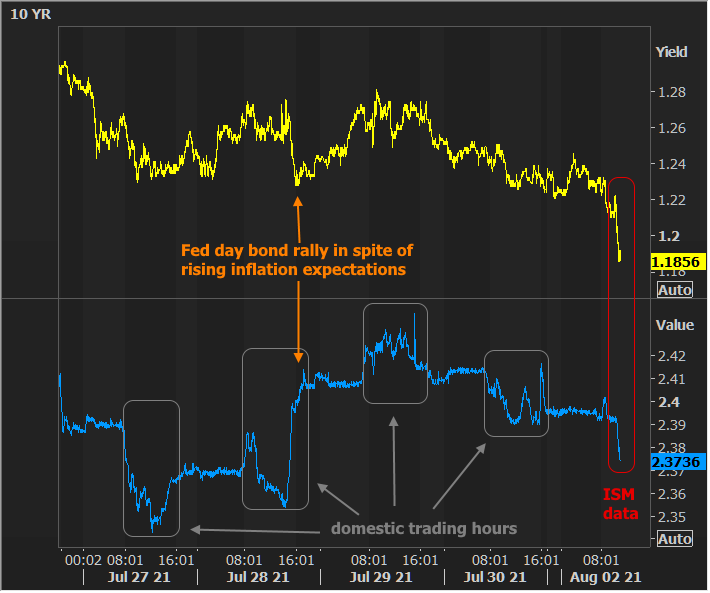 Notably, there is almost always more movement in breakevens during domestic hours, but just as July 28th's movement was clearly correlated to the Fed announcement, today's was in clear response to the ISM data.  Also of note: the correlation was inverted on the 28th.  That's uncommon and counterintuitive in the sense that bond yields ideally represent some combination of economic growth + inflation, but it's the rule as opposed to the exception when it comes to Fed accommodation.  Reason being: a friendlier Fed suggests eventual upward pressure on inflation (bad for rates), but that pressure is applied in part via additional bond buying (good for rates).

In other words, the spike in inflation expectations last week may look like it helped bonds, but it was actually just the byproduct of a slight adjustment to the market's perception of the Fed's stance--a perception that happened to hurt inflation and help bonds simultaneously.