There's no doubt you'll see excellent mortgage rates when this morning's rate sheets come out.  Many lenders will be at or below their previous all-time lows.  Many others will be slightly above.  And on average, rates will remain in trend that's better described as flat instead of falling.

What's wrong with that?  Nothing really--especially when rates are in line with record lows.  There is something that's interesting about it though, and it's easy to see when we compare MBS price movement to average rates.

Because MBS trade in price, the easiest way to see correlation with rates is to invert one of the lines (otherwise they'd move in opposite directions).  All that to preface the following chart which shows UMBS 2.0 prices inverted (the lower the orange line goes, the higher MBS prices are).  During more normal times, mortgage rates and the MBS line would be right on top of each other.  This time, not so much. 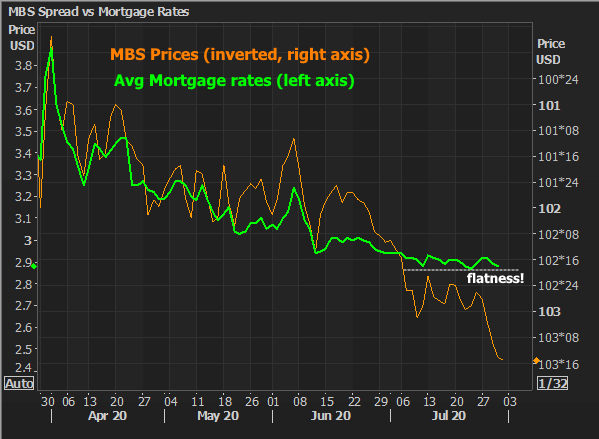 I'm not giving you this heads-up to frustrate anyone or to make you pound your fists on the table and demand lower rates.  Quite the opposite!  This chart should be exciting.  If lenders tried to run this race like the hare, they'd cause bigger problems for prepayment speeds than we're already seeing.  The athletic tortoise approach is what will give you and your clients the best combination of low rates and stability.  And to be sure, rates can and will move lower if MBS remain in this territory.  But the most exciting part is the implication that rates have some insulation against any potential bond market weakness--something we'll start to look out for if 10yr yields make a strong move back up and over the recently broken range boundary at .58%.

Today is the last trading day of the month.  As such, there can be some seemingly random momentum due to certain compulsory trades among money managers with deadlines to meet.  MBS Live members can read more on that in this primer.