The bond market doesn't tend to care about wholesale inflation (PPI) relative to the mainstream indices (CPI, PCE), but a number as high as 5.6% might give us some pause.  Or at least we might have have imagined it would before this morning.  Bonds didn't think twice about taking it in stride.  Combine that with yesterday morning's tame reaction to the highest CPI in 30 years and a Powell speech (later today at Congress) that reiterates the commitment to ongoing accommodation, and bonds are off to a solid start.

Stocks are off to a solid start as well, and for largely the same reasons.  Simply put, when economic data or Fed speakers do something to inform the outlook for Fed accommodation, stocks and bonds tend to react predictably.  More accommodation = stocks up and yields down.  Less accommodation = stocks down and yields up.  This dynamic played out yesterday morning after CPI initially gave the market pause, and then again this morning after Powell's prepared remarks were released (congressional testimony later today).

There is also an interloper in the form of yesterday's 30yr bond auction.  It had a clear, logical, negative impact on bonds, but it carried no implications for Fed policy.  As such, we're left to guess at the motivations.  These could include profit-taking after fresh record highs, volatility at the close of the EU trading session spilling over to the US, an actual reaction to the higher rate implications from the auction, or something else entirely!  Ultimately, it doesn't much matter.  This is more of an acknowledgement that, while the trading pattern at 1pm looks the same as the other highlighted areas, the underlying motivations were different. 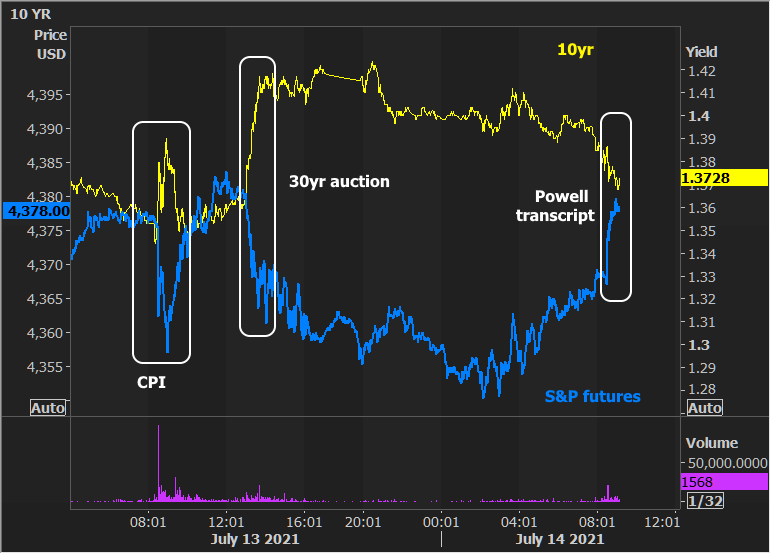