MBS Live Day Ahead: Bonds' Already Hitting The Floor of The New Trend

Trend channels in financial markets are some of the most basic forms of analysis.  They consist of lines drawn along the highs and lows of a charted security.  When parallel lines can be drawn that connect more than a few highs and lows, you have a trend channel!  It's even acceptable for the security to break outside the lines here and there if they are still capturing a majority of the bounces.  The goal of a trend channel is right in the name: we're trying to capture a general trend that speaks to the pace of improvement or deterioration in any given security.

When it came to bonds, 10yr Treasury yields were in a clear trend channel pointing toward gently higher yields for several months recently.  They faked a breakout in early June only to return to the previous range and ultimately break through the LOWER boundary.  From there, we began to follow the sideways range implied by several months of highs and lows.  The floor was .58+ and the ceiling was .74.

As of yesterday, however, recently stronger performance led us to discuss a new trend toward lower bond yields.  Now today, we're already in a position to test its outer limits.  In other words, yields are already challenging the lower boundary of the new trend channel (teal lines below).  Incidentally, this also means they are challenging the horizontal/sideways range we've been talking about since mid May. 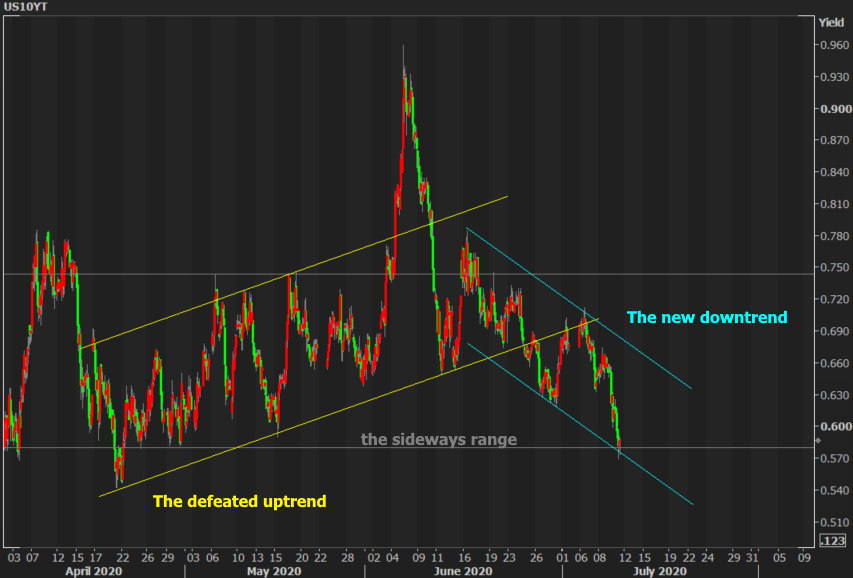 If I were more in the habit of writing click-bait headlines, I would have used something like "Here's Why Rates Are Done Rallying For Now."  I suppose I would have thrown a "probably" in there as well to avoid looking too dumb in the event rates continued to rally.  But for those that follow trend channels until they're broken, we do indeed have a compelling case for resistance here.  I'm not sure if this makes the probability of bond market weakness any higher than 50%, but for anyone who relies more on charts than fundamentals, that's definitely the case.  Even as I type, yields look to be lifting off the lower lines in the chart above (they were at .58 when I snapped the chart and are now up to .596).

MBS, of course, are outperforming in general and might not be too upset about a token, technical bounce in Treasuries.