MBS Live Day Ahead: Surprising Resilience in Bonds or Surprising Strength in Stocks?

Conventional wisdom holds that stocks tend to do better when bonds do worse.  The logic is simple.  When investors feel more optimistic or more risk-tolerant, they're more likely to re-allocate some bond holdings into stocks.  When they're fearful and risk-averse, bonds get the nod.  The result is short-term correlation between stock prices and bond yields, and we've seen plenty of that as both sides of the market capture investor sentiment surrounding coronavirus numbers.

But the important part of this thesis on conventional wisdom is the "SHORT-TERM" caveat.  The longer we look back, the more we see stocks and bonds willing to diverge.  The most obvious recent example had been a time frame that included the market volatility in March.   In that context, bond yields have essentially remained flat and low while stocks have generally recovered. 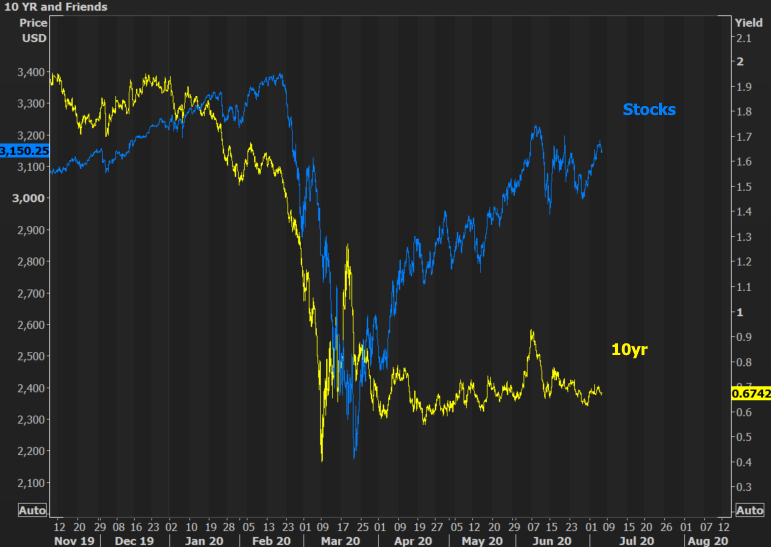 But now we're seeing reasonably obvious examples of similar divergences over shorter time frames.  For instance, heading into July, bonds have been on a linear trend toward stronger levels while bonds have been flat all month. 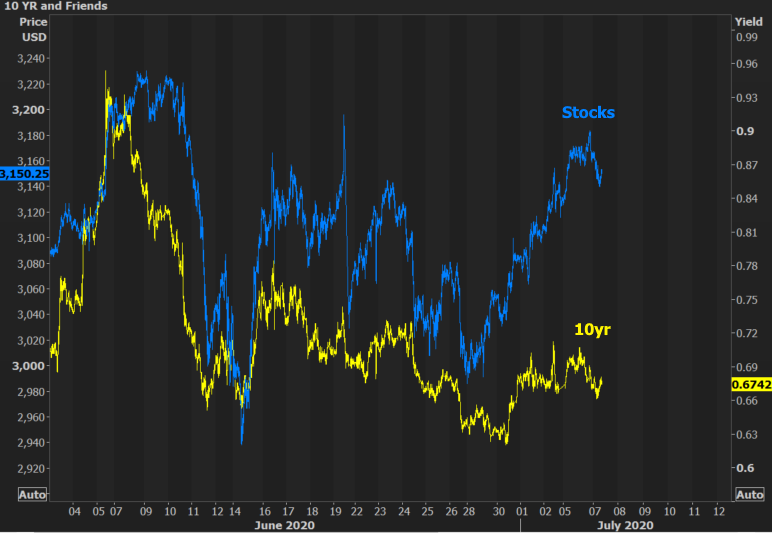 Is there any significance here or anything we can learn from these divergences?  If anything, I think the best takeaway is just how impressive the level of demand is in the bond market given the extraordinary level of Treasury and other debt supply hitting the shelves of the fixed income supermarket.  To see stocks tell the story, investors are confident enough about the economy's bounce back from covid that bond yields should be higher.  But one should never forget the longer term relationship and the inherent differences between stocks and bonds.  After all, one of the two can grow and grow as the biggest companies in the world get bigger.  The other will ideally oscillate in a sideways range forever, given a long enough timeline.  In fact, were it not for the aberrant inflation episode of the 70s, 10yr yields would always be known as something that traded in a 0-6% range. 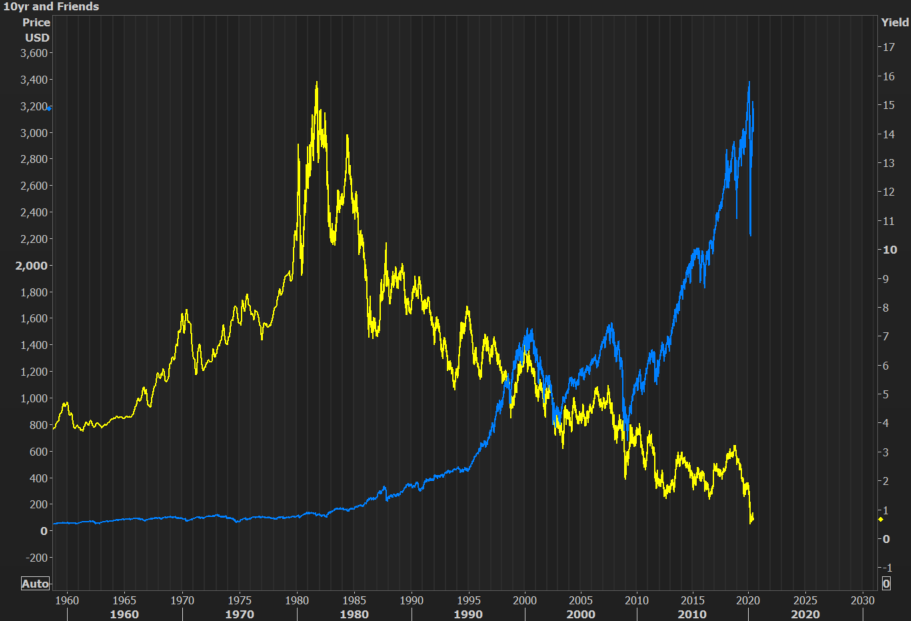 All this to say: we don't NEED to reconcile divergences between the two even though it feels like one of them is lying when it happens.  Stocks are telling the story of the largest companies in the world surviving, but failing to capture the collapse of a certain percentage of small businesses.  They are also being carried by the outperformers--large companies whose outlooks have only improved due to the pandemic (Amazon is up 40% from its pre-pandemic high, for instance).  We must also consider monetary and fiscal stimulus.  It definitely has an impact on stocks.

Finally, there are those who would argue that lower rates themselves are a precursor to stock market strength.  While that's precisely the opposite of the conventional wisdom, they're not wrong.  After all, if there are no returns to be had in the fixed income market, it naturally forces investors to look elsewhere.  Or looked at another way, ultra low rates provide cheap financing for corporations to improve/expand or simply decrease their cost of capital--something most of them have been doing vigorously in recent months.