MBS Live Day Ahead: Have You Heard The One About The Uptrend?

Stop us if you've heard this one before, but rates are low due to an unprecedented global emergency. Unless coronavirus situations deteriorates significantly, it's only fair for rates to gradually push back toward higher levels.  But if that's so obvious, why haven't rates already preemptively moved much higher?  Why are mortgage rates continuing to operate near record lows?

2 questions there, and each of them has a different answer.  Let's break them down.

Simply put, markets know that the coronavirus saga has yet to fully play out.  Naturally, numbers looked to be getting under control as lockdown measures forcibly created social distancing.  But now that most states have eased lockdown measures, epidemiologists' fears are being confirmed.  The stuff is still contagious and still more than willing to spread among people who are in close contact. 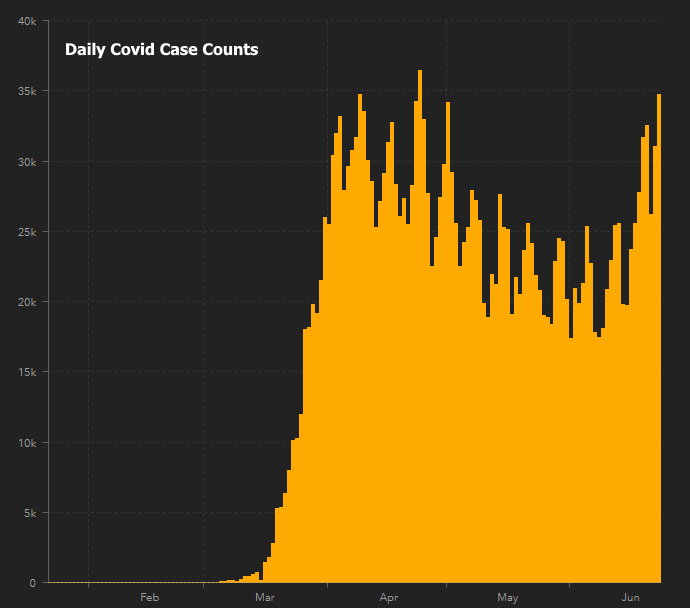 For whatever reason, this seems to be a polarizing assertion.  Many people have taken to pounding their fists on the table and arguing against the "rising case count" narrative.  It's a hoax!  OK, it's not a hoax, but it's all due to increased testing!  No matter your stance, let's focus on facts.  It's true, in some states, increased testing is obviously the key driver of case counts.  In other states, legitimate problems are developing.  This is easily seen in hospitalization rates.  Here's an example from Texas:

Bottom line here, investors are rightfully worried that states are going to have a tough time fully reopening without a 2nd wave of covid-19 ultimately forcing the reintroduction of lockdown measures.

How about Mortgage Rates?  Why have they been able to remain near all-time lows if there is gradual upward pressure in Treasury yields?

Ah, an easy one, and easily answered with just one chart: 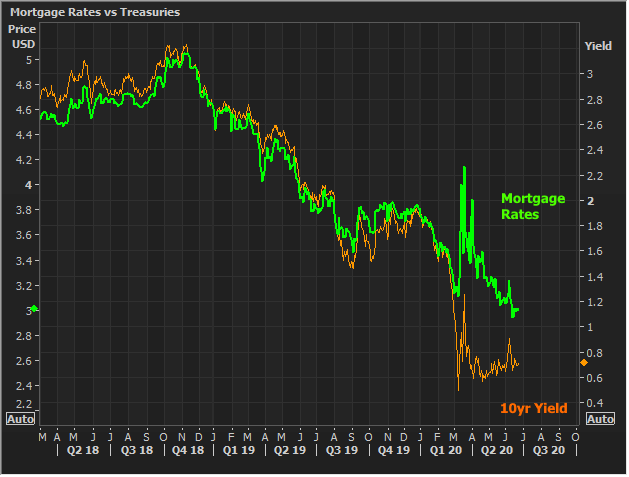 Conclusion: there is an uptrend in rates in the broader bond market.  Mortgages haven't experienced it because they never fell as much or as quickly as Treasury yields.  They could close that gap a bit more, perhaps, but the gap would also be closed by mortgage rates holding flat while Treasury yields continue moving higher.  Either way, keep the underlying trend in mind.  It will soon mean that mortgage rates will be forced to jump on the "sideways to slightly higher" bandwagon.  And the only thing that would really mitigate that is something that no one should really hope for.