MBS Live Day Ahead: Trends in Treasuries and Mortgage Rates Are in Conflict

Yesterday, after 4 straight days of improvements, the bond market easily returned to the trading range that had been intact for 6 weeks (until it was broken by last week's big selling spree).  But are yields returning to a flat range, or one that is slightly upwardly sloped?  An upward slope would make plenty of sense assuming a gradual recovery of the economy and labor market following the unprecedented contraction driven by the coronavirus response.  Last week's data fueled additional belief in that recovery narrative and rates rose faster.

Now this week, we've seen covid-related concerns increase due to several large states reporting higher and higher numbers.  At the same time, the Fed gave the bond market what it was looking for by firmly committing to a baseline amount of bond purchases on an indefinite timeline.  All things considered, it makes sense to unwind much of the previous week's economic optimism (and bond market negativity).  Incidentally, the stock market is fully on board with this bounce as it too has erased last week's move. 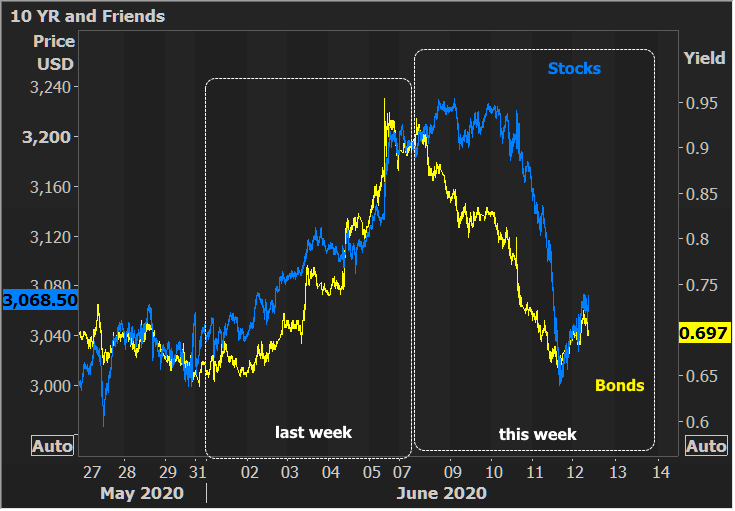 This connection between the coronavirus outlook and trading levels has thus been reinforced and will likely continue to be the dominant market mover any time it has seemingly important things to say about how well the economy is able to reopen. Simply put, it will decide if rates have returned to a flat range (horizontal gray lines at .58 and .74 below), or one that conveys gradual healing by maintaining an upward slope (yellow lines). 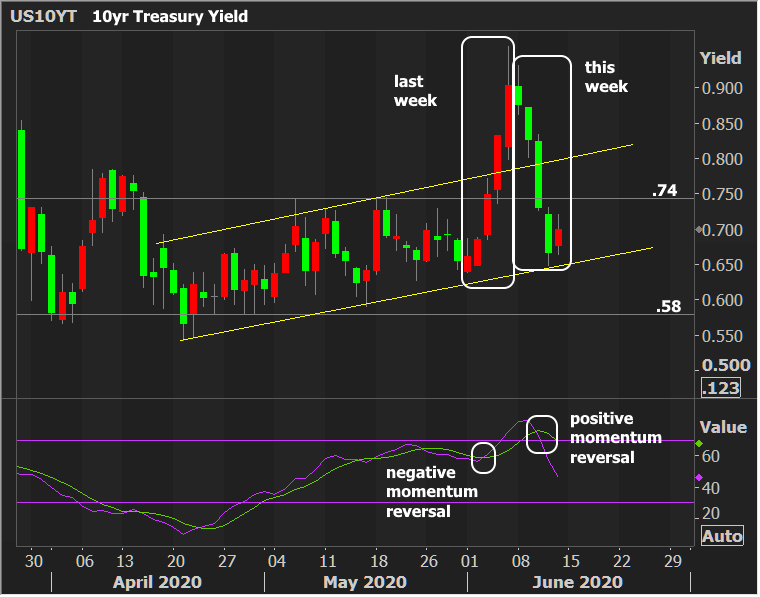 As always, there are caveats, nuances, and "yeah buts."  The first is that the economy isn't the only consideration, even if it's the primary one.  There's also the matter of Treasury supply (i.e. new debt being issued to pay for stimulus and revenue shortfalls).  It's largely understood to be immense, but to whatever extent it gets more immense, it would be a vote in favor of the yellow lines.

Pushing back in the other direction is the fact that both mortgage bonds and mortgage rates have been outperforming Treasuries.  Granted, this is more of a correction to past underperformance (Treasuries reaped much more benefit from the initial coronavirus panic), but it's nonetheless a feather in the cap of mortgage rates.  Even if MBS aren't able to continue improving vs Treasuries, mortgage rates still have room to improve vs MBS--something they did yet again this week.

The following 2 charts show 2 different ways to examine this phenomenon.  The first one show both the average 30yr fixed rate and the calculated yield for the UMBS "current coupon" (the theoretical yield of an MBS coupon trading at PAR). 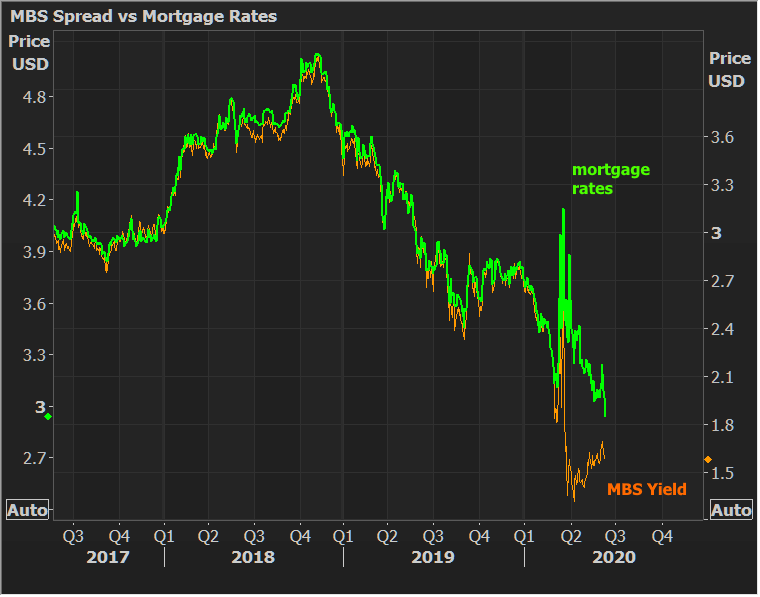 The next chart simply plots the difference between those two lines. 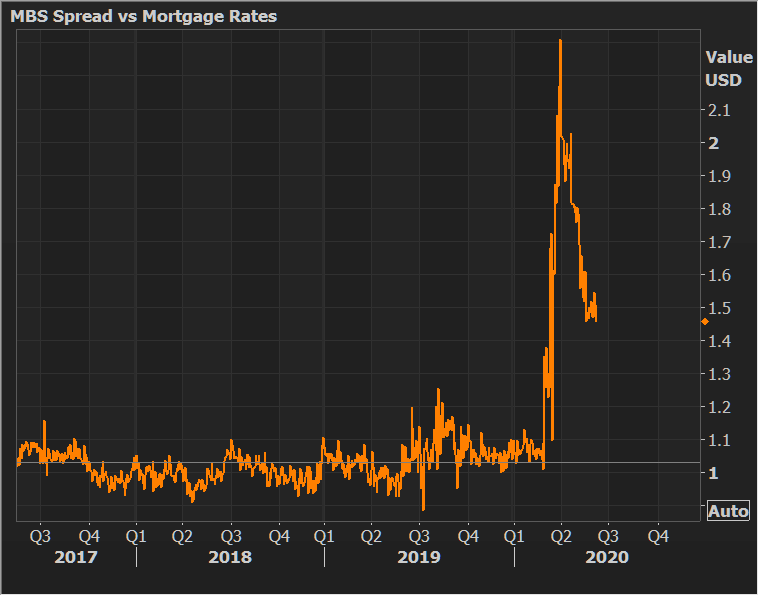 The flat line just over 1.0 is effectively the baseline.  The orange line might not close that gap completely as new concerns surrounding the post-coronavirus mortgage market may linger indefinitely.  But it should be able to close a bit more of the gap, slowly but surely.  Given that the trend in Treasuries has been toward gradually higher yields, this spread-tightening is the only reason mortgage rates have been able to push lower and lower in the past few weeks.

As for the day ahead, it wouldn't be a surprise to see bonds settle into the previous range with a bit of a negative correction.  That's not an analytical tour de force considering we're opening the day in weaker territory.  I'm simply saying that's a logical outcome and it wouldn't be a surprise to see this level of weakness remain intact through the close (or a bit more weakness if stocks really start to recover).