Treasuries held onto yesterday's gains in the overnight session and are starting the day in slightly better shape (MBS are roughly unchanged).  This means that 10yr yields continue adhering to a technical pattern we've been following for the past few weeks AND that we may get to see that pattern put to the test in the day ahead.

The pattern in question is one of the simplest: a trend channel consisting of parallel lines drawn along the recent highs and lows in any given market instrument.  Placement of these lines is open to some degree of interpretation.  For instance, in our version, I have the lines set based on opening and closing levels and some of the intraday noise has been tuned out.  That doesn't mean the intraday levels are irrelevant, just that I needed/wanted lines that captured the prevailing trend in bond yields (which has been slightly higher since mid April. 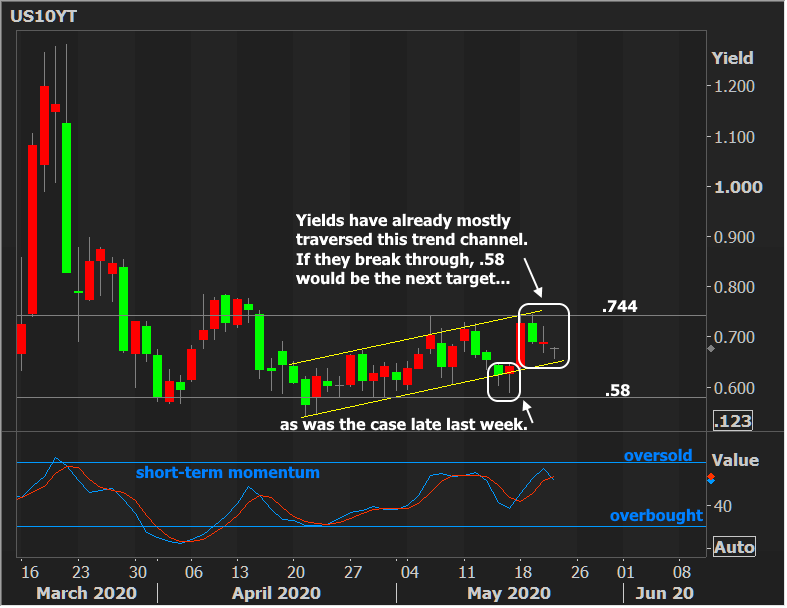 As the chart suggests, this morning's lower yields mean we're already close to the bottom of the trend channel.  The same thing happened last Thursday, but yields continued lower, ultimately coming very close to the horizontal line at .58 (the level we'd pick if we could only choose one technical "floor" over the past few months).

If we think and talk about technical patterns as crystal balls with future-predicting potential, we might conclude that a break below the trend channel implies a move to 0.58, but that's not what I mean when I refer to .58 as the "next target" in the chart.  After all, .58 was the next target last week and yields actually only made it to .59.

By coming up short of the target level, bonds gave us information.  If they'd hit or broken that target, they would have given us different information.  We're constantly engaged in the practice of taking the market's temperature.  We're trying to assess how bullish or bearish traders are feeling.  Breaking technical lines underfoot is bullish for bond yields.  The caveat is that such breakouts can also serve as cues for sellers--something to look out for in the immediate wake of a breakout.

In the current case, I'm not too terribly interested in or concerned by any of the movement in this narrow, mostly sideways range.  Yields would need to break above early April highs at .78 or well below the .54 floor from 4/21 to really be doing anything new and different.  Even then, 2.0 MBS haven't been adhering to the same "slightly weaker" pattern.  They've been doing better than Treasuries.  More importantly, mortgage rates have been doing better than MBS for about a month and a half now (in terms of RELATIVE movement, by the way... they were starting from the worst-ever relative position vs MBS at the beginning of April, so there's room for improvement).

Today's data and events are non-events as the market is already well aware of economic weakness.  The shuffling of trading positions ahead of a 3.5-day holiday weekend will be more of a market mover than any of the scheduled data.  And it will be the biggest market mover overall unless an unexpected headline captures traders' attention.