After last Friday's weaker jobs report, bonds rallied at first, but then bounced into weaker territory in just a few hours.  That failure meant bond yields ran the risk of treating 1.53% as a technical floor.  It also meant 1.62% stood a greater risk of being challenged, if not broken.  Yields edged up to 1.62% yesterday and now today's huge CPI number made it an easy call to jump significantly higher.  The afternoon's 10yr auction serves as vote on whether or not to find support at the 1.68% ceiling or proceed to the next technical level at 1.75.

Those who follow along fairly closely should have eyebrows raised right now because we've been steadfast in our dismissal of inflation as a market mover for more than a year.  But those who follow along super duper closely know that inflation data is finally becoming relevant as we enter an annual time frame that no longer includes pre-pandemic inflation data, and a month-to-month time frame that's no longer distorted by wintertime lockdowns.  The Fed, economists, and many traders still expect plenty of volatility in the inflation data.  Everyone is also still trying to account for a wide band of uncertainty in outcomes.

We entered the day with a seemingly wide band of outcomes as far as predictions for the Consumer Price Index were concerned.  The most optimistic estimates saw monthly CPI increasing 0.5% and Core Annual CPI rising 2.5%.  The actual numbers turned out to be staggeringly higher (0.8 and 3.0% respectively).  It's one thing for pundits to say we can overlook a temporary surge in inflation.  It's another thing to be confronted with numbers that are even higher than the highest expectations--not to mention several months early by many accounts.  With numbers this big, it's easier to overlook the fact that used cars and utilities account for most of the spike.  Traders are trading it.  Bonds are on the run.

How do we know it's inflation moving markets? 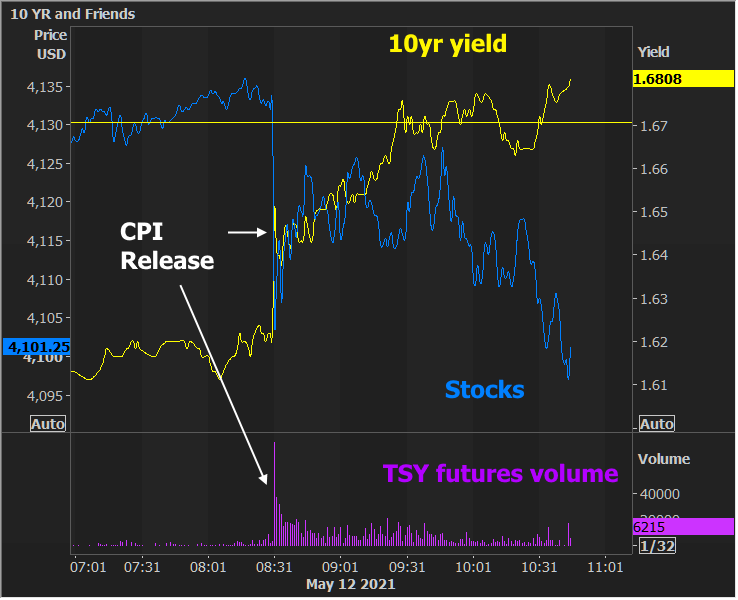 Here are a few bonus charts.  They're a bit esoteric, but they show how inflation expectations ("breakevens") have changed over time relative to certain baseline dates (and regular 10yr yields).  The first chart shows that 10yr yields have risen 1.47% in 12 months due to inflation, and only 1.02% in total.  Factor out inflation and yields would be negative... 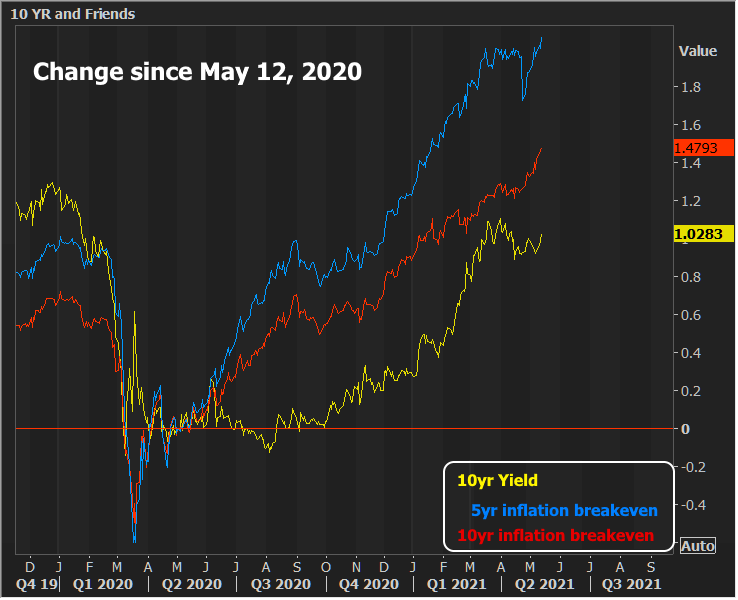 The next chart shows that inflation was in the back seat in February and March as bonds traded fiscal stimulus headlines and infrastructure spending fears (more "supply").  Inflation is now back in the driver's seat in late April and May.  Yields would be around 1.50% without the past few weeks of upward movement in inflation expectations. 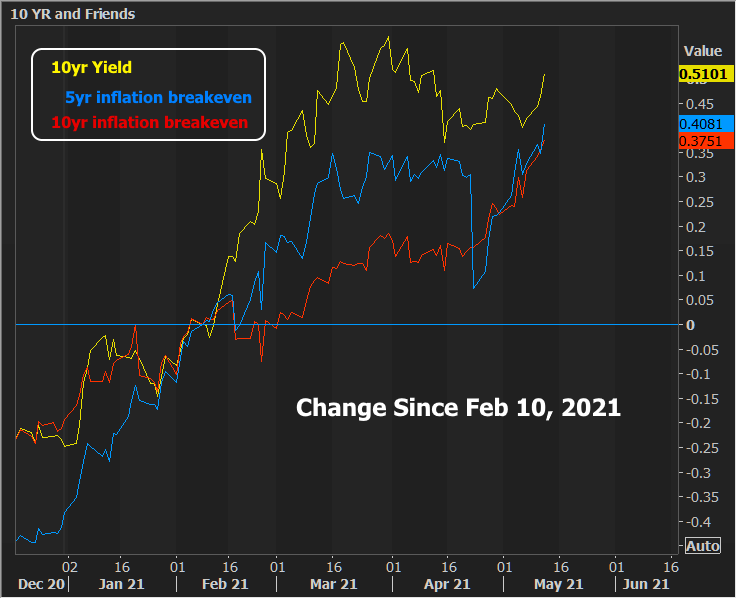