MBS Live Day Ahead: MBS May Have Gotten Too Strong For Their Own Good

There's a bit of 20/20 hindsight in the observation that MBS strength could/should only last for so long before experiencing a bit of a correction.  I'm not talking about outright price levels per se.  Rather, MBS 'performance' is measured against a benchmark for the asset class.  10yr Treasuries are the most common.

Here too, everything is relative.  Obviously, Treasury yields managed to fall quite nicely from March 19th through April 1st.  They just didn't fall as much as they could have without the looming issuance threat.

At the same time, MBS "issuance" (new originator supply) was dying down due to wacky pricing and the shrinking credit box created by defensive overlays.  Other supply (from sellers who already had MBS to get rid of) was quickly drying up due to massive Fed purchases during that time.

The result was insanely high prices while Treasuries were merely doing "really really well." If we chart the spread between MBS yields and Treasury yields we can see the initial surge of Fed buying driving the spread to long-term lows at the end of March.  Then in early April as Treasury yields were weakening slightly, MBS managed to improve, ultimately resulting in another trip to the same strong spread levels. 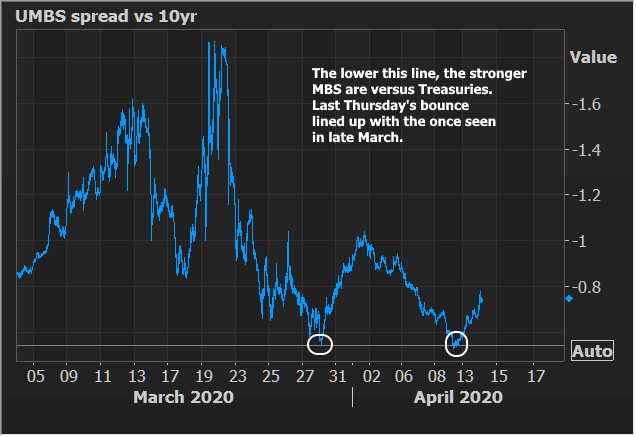 At least some of yesterday's weakness can be attributed to a certain class of investor monitoring this spread and consciously deciding to decrease their MBS holdings.  Indeed, I've seen more than a few notes from trade desks in the past 48 hours recommending a move to neutral from overweight.  Granted, this alone isn't enough to cause the weakness, but it has been contributing to it.

In the bigger picture, there are bigger concerns and bigger issues.  These include several problems in the servicing market causing investors to shy away from their typical level of demand.  Backstops and bailouts aren't enough to fix those problems.  We need time and clarity on the forbearance issue.  From a pure price standpoint, the concern is that "risk" has turned a corner with respect to coronavirus.  Bonds are doing their best to hold relatively sideways for now, but stocks continue making a case for more optimism.  The more than continues, the more MBS may face pressure from those macro undercurrents. 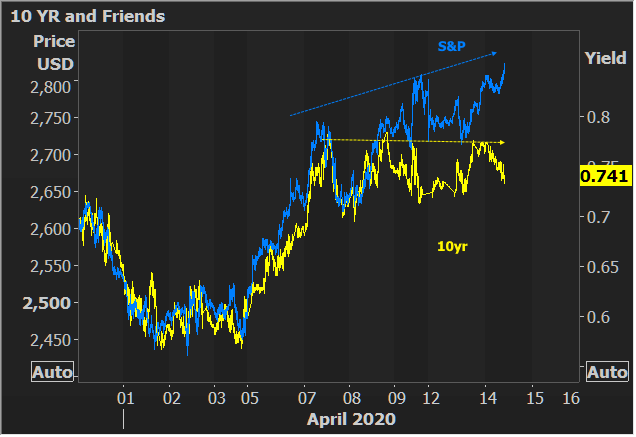