MBS Live Day Ahead: 5yr Auction in Focus; What About Econ Data and Oil?

Bonds are starting the day in roughly unchanged territory after trying to go on a stronger run in the overnight session.  If the remainder of the week sees higher yields, it will be yet another example of the "false start" trend discussed yesterday.

The only major data on the econ calendar this morning was Durable Goods.  It came out much weaker than expected, but had effectively no impact on bonds.  What's up with this?  After all, isn't part of the problem for the bond market that the economy is bouncing back from covid-related suppression?  While that is indeed generally true, it has less to do with the still-volatile data from the winter months and more to do with the bigger picture (which has already confirmed a return to normal ranges for most reports).  Beyond that, the data later in 2021 will be even more meaningful as it will hopefully be speaking to an economy with a more significant resurgence in jobs.  All that to say, data matters in a general sense, but no single report will necessarily dictate bond market momentum on any given day.

What about oil prices?  That's an increasingly common question due to its connection with inflation, but there's a right and wrong way to think about it.  To be very clear, until we don't use the stuff more a majority of transportation of goods and people, it will always matter to the bond market because it will be informing the price of commerce.  And of course, bonds care deeply about inflation trends.  This is one of several reasons we can often observe correlation between yields and oil prices, such as that seen over the past few days. 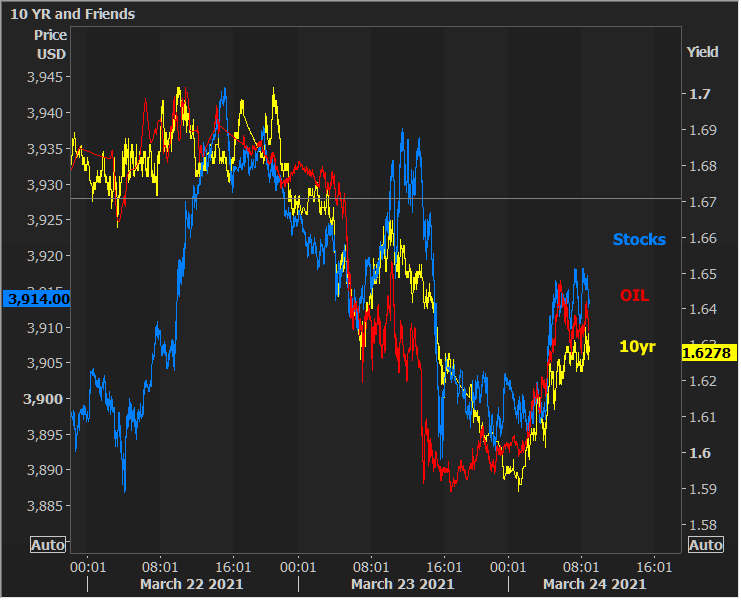 Notably, stocks share a lot of the same correlation over this time.  In particular, take note of yesterday afternoon's downtrade.  It was actually the stock sell-off that had the most correlation with the bond rally.  The drop in oil happened earlier and didn't garner a direct response in bonds.  The more we zoom out to the bigger picture, the more examples we can find of big breakdowns in the correlation. 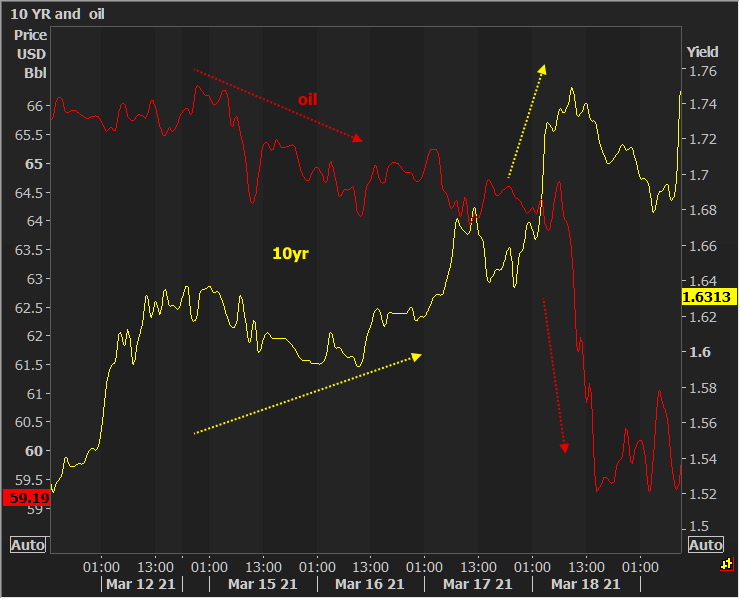 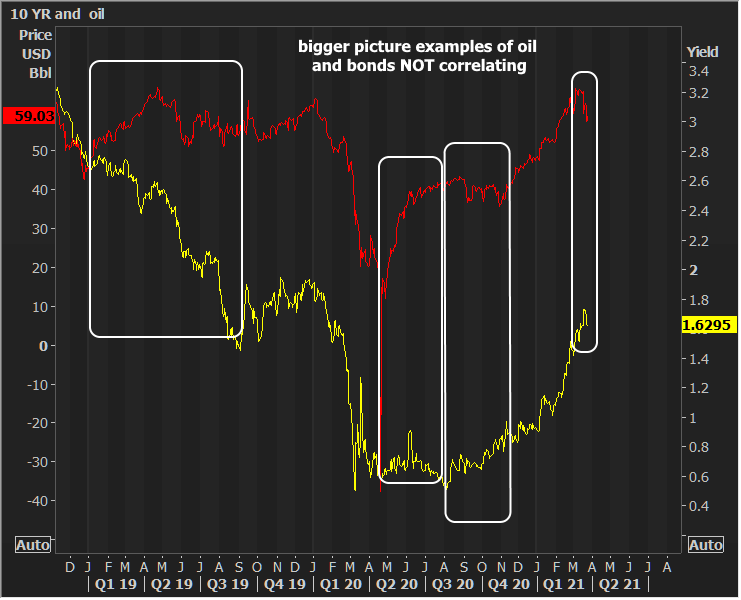 Bottom line: oil is one of many inputs bonds can watch to gauge inflation pressures, but it's definitely not guaranteed to correlate.  Also keep in mind that both oil and bonds share a correlation with general economic strength.  A strong economy has always put upward pressure on bond yields, right?  Wouldn't it also make sense that a strong economy implies a greater need to transport people and goods?

Ultimately, today's biggest market mover may be the 5yr Treasury auction this afternoon.  There's no guarantee of a major reaction, but let's say that the auction "reserves the right" to have the last say today.  Auctions have been some of the most reliable market movers in the past few weeks, effectively giving traders the ability to endorse or reject the evolution of the trading range.