Bonds had a great day yesterday--not so much because the rally covered a ton of ground, but rather because it helped build a case for the end of the more abrupt selling pressure seen in February.  The hope was (and still is, to some extent), that March would offer some push back to February's rout.

Those hopes were much brighter yesterday, even if we were still feeling cautious due to the inability to break the 1.38% floor in 10yr yields.  Today is a different story and a fresh reminder of 2021's rising rate environment.  Rather than triumphantly break below 1.38% last night, yields went out of their way to avoid it.

Insult was added to injury during European hours where EU sovereign yields led another early morning sell-off in Treasuries.  Likely culprits include generally-stronger economic data, vastly increased government borrowing in the UK, and comments from central bank officials on abstaining from intervening in the recent rate rout.  By the time this spilled over to US bond markets, it made for a very clear bounce inside the more recent (more upwardly-sloped) trend channel (the one we were hoping to break in the event of lower yields today). 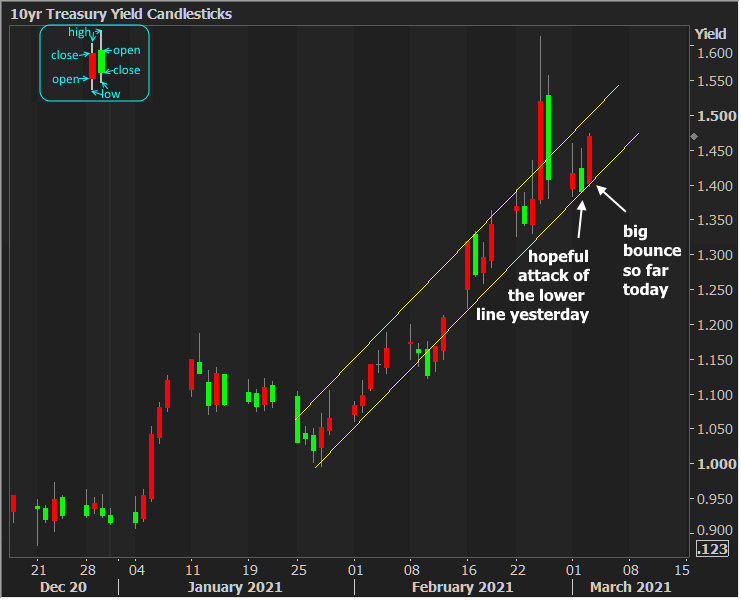 Bottom line: the waiting game (to break this trend) continues.  Any burgeoning optimism over those prospects is effectively re-set by today's losses.  Thankfully MBS are taking the news much better, with 2.5 coupons continuing to trade higher than Friday or Monday's closing levels.