MBS Live Day Ahead: Dear Bond Market, I Challenge You To Do Something Interesting

Bonds have been able to put in a few days with moderate movement both higher and lower in yield, but have generally been holding inside a range that is even narrower than the one seen during December.  December's range, in turn, was narrower than November's, and so on and so on, all the way back to August 2019.

Narrowness is one thing, but it's currently being compounded by a lack movement.  In other words, while November was narrower than October in terms of the distance between highs and lows, it at least occurred at slightly different trading levels.  Dec and Jan, on the other hand, have each occurred INSIDE November's range.  This isn't a very common occurrence for the bond market, and when it happens, it's only a matter of time before more interesting movement starts up again. 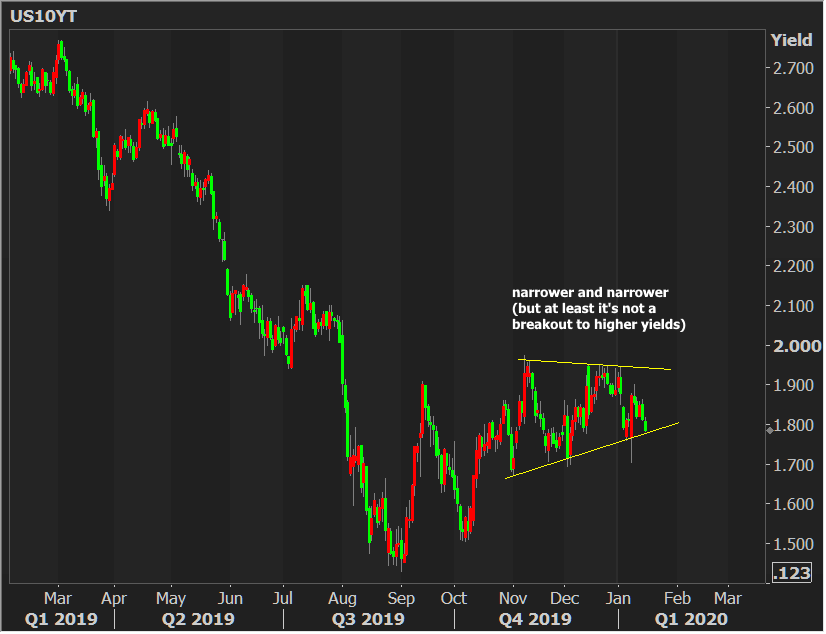 With all that being the case, I'm throwing down the gauntlet to the bond market to flip that switch and do something interesting.  But that's selfish on my part, I suppose.  Granted, it would make day to day discussions much more interesting, but the risk is that the interesting move is due to a sell-off!  In truth, it would be great for the mortgage and housing market for rates simply to continue operating in a 3.6-3.9% range indefinitely, but that's not destined to be the case.

At some point whether we like it or not, things are going to get moving again.  Today's US/China trade deal signing probably won't end up being the catalyst for that move, but markets do seem to be reacting to White House comments  leading up to the event.  Those comments have expressed a bit more "tough talk" than we might have expected (i.e. tariffs to remain in place, but COULD be discussed as part of the phase 2 signing."  This raises doubts about the deal's ability to further soothe the market's trade-war-frayed nerves.  After all, many of the details won't be known until today's signing and some pundits have suggested those details may underwhelm.

None of today's econ data has what it takes to move markets, so all eyes are on trade deal updates.  There's no set time for that at the moment, but stay tuned to MBS Live updates for--well... updates!