MBS Live Day Ahead: New Week, New Chance To Find The Next Ceiling

0.96% was a well-established ceiling for 10yr yields in November and December.  Despite numerous intraday breaks, yields only managed to close higher on Dec 4th (.969%).  Every time yields moved up into the .96% zone, buyers pushed back like clockwork, even if only on a wristwatch scale.  Fast forward to last week and the ceiling was obliterated by the GA senate election results (full democratic control implies more Treasury issuance in short term).  The week ended with 3 heavy days of selling--heavy enough that it's already time to start looking for the next technical ceiling in Treasury yields.

While it's probably too much to hope for, the first contender will be last week's high yield of 1.125%.  It's incidentally the same high seen in the opening minutes of today's trading session.  Why is it too much to hope for?  Because we're basically trading there right now.  By the time you read this, there's a decent chance yields are already higher.  Instead of horizontal ceilings, bonds may have to look for support from the upper trend line that's guided the sell-off since August, but even then, we're uncomfortably close to a breakout. 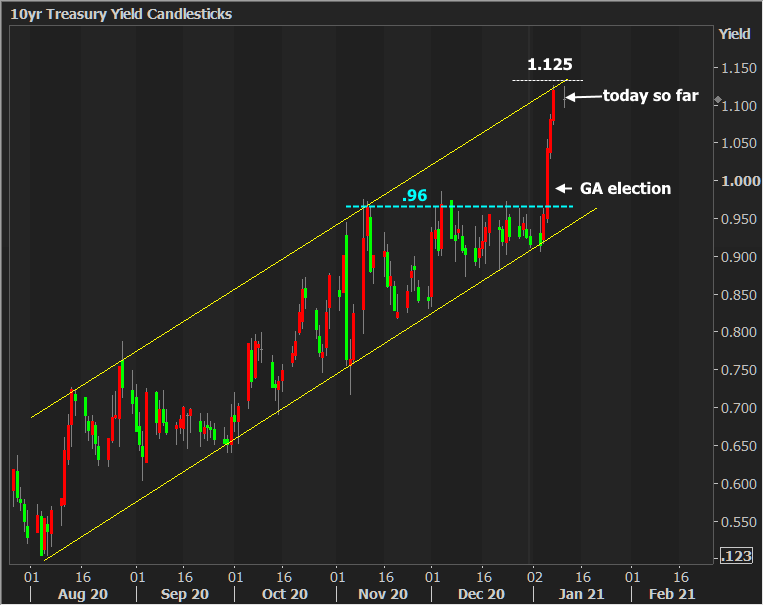 In the first half of the week, Treasury auctions and Fed speakers will be in focus.  Traders are looking for more clues as to how the Fed will define its fairly vague line in the sand with respect to tapering asset purchases.  In the second half of the week, Thursday's expected Biden stimulus proposal is the biggest-to-do, with Friday's Retail Sales report playing a supporting role.