MBS Live Day Ahead: Just What The Heck is Going on With Mortgages vs Treasuries?

Bonds started the new year off on a strong note yesterday, rallying to the best levels since ____.  That blank would be filled in with a distinctly different month depending on who you choose as your bond market spokesman.  If you choose "10yr Treasuries," we had the lowest rates since January.  As we move down the line to shorter maturities, the date would get more recent.  For example, we'd only have to go back to early June to see lower 2yr yields.

Several things, really...  We talked about a few of them back in October, which will be an important time frame for the following discussion.  Here's a link to that piece.  In it, I discuss the issue of duration (how long an average MBS coupon lasts) as it relates to broader bond market duration preferences.  Simply put, consider the 10yr vs 2yr performance mentioned in the first paragraph above.  10s have been doing way better as the yield curve flattens.  MBS duration is more than 2 years and less than 10, so it would make sense for the performance to be somewhere in between purely from a duration standpoint.

But there is other stuff going on as well.  "Convexity selling" is a problem for MBS any time rates are spiking aggressively, and especially when the yield curve is flattening (shorter term yields rising faster than longer-term yields).  Convexity sounds complicated, but it's pretty simple.  I'll use bullet points to break it down:

The charts below point out a few instances of convexity selling.  The blue line is the spread between an MBS yield benchmark (calculated by Thomson Reuters) and 10yr yields.  In addition to convexity, we also have Fed bond buying considerations.  This was absolutely huge in 2012 with QE3 (the one where they just focused on MBS) caused a massive "re-set" in the performance of MBS vs Treasuries.  The spread has really been trying to find its range since then, and has mostly done a good job of staying calm.  Late 2018, of course, is a special time because Fed MBS purchases dried up as of early October.  The resultant spike in spreads is highlighted, but note that spreads had been weakening all year. 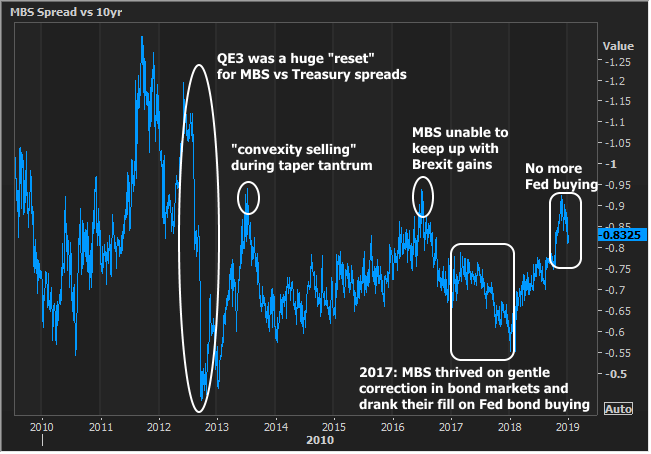 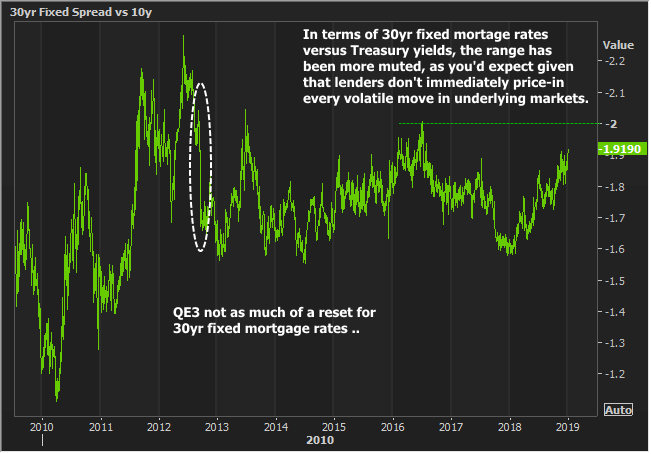 An even easier way to understand the mess of information in the charts above would be to view spreads in the context of 10yr yields.  To do that, we'll need to invert the axis such that MBS are weakening when the blue line is falling (in the chart above, the opposite is true).  As you can see, the general trend is for MBS performance to correlate with 10yr yields as long as rates are fairly stable.  Big spikes in rates cause convexity selling. 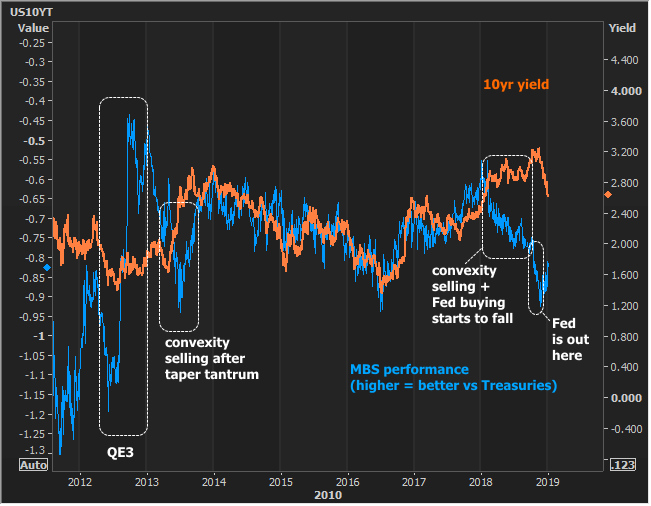 The bottom line is that 2018 suffered from a combination of convexity selling due to the highest rates in years as well as the gradual decline in Fed bond buying.  The additional drop in October was partly due to the Fed being completely out of the MBS market and partly due to Treasuries finding more favor amid the extreme stock market volatility.  Any way you slice it, it was going to be bad for the mortgage market, relatively.