If you're not familiar with Fezzik from The Princess Bride, you have more important things to do than read about what's going on in the bond market (but 98 short minutes on Hulu can fix that).  For everyone else, there's this analogy: the bond market is like Fezzik.  It specializes in fighting large groups!  This week's group is the triumvirate of major central bank announcements (Fed, BOE, ECB) in the space of just under 20 hours.  Each announcement presented itself as a bearish impulse.  The net effect, by all rights, should have pushed rates higher.  But an hour into the domestic session and yields are lower than they were before the fight began.

To be clear, the "bond market" in this case refers specifically to Treasuries.  They're the hero of this story. European yields haven't made it back down to yesterday's lows yet. 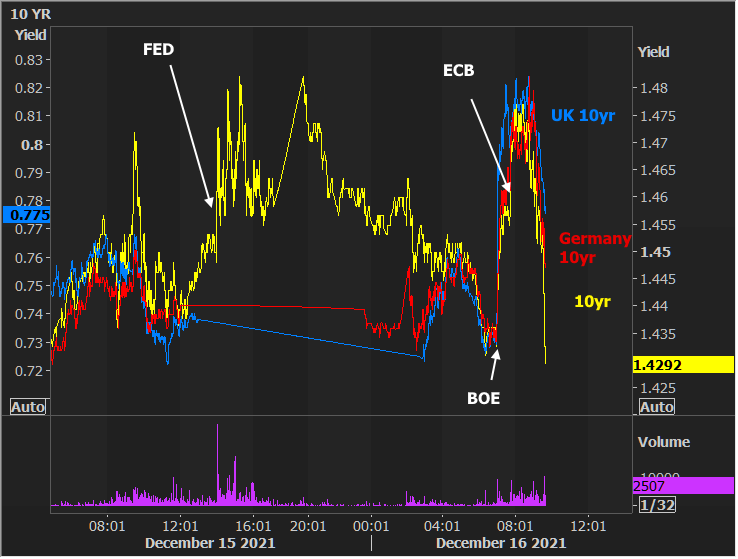 The other way to look at it would be that lower central bank accommodation is deflationary, bad for stocks, and good for safe havens.  Using 2013/2014 as an example, the run up to the tapering announcement was the bad time for bonds, but the 2014 rally began when the Fed was actually decreasing accommodation.  Granted, 2014 was complicated due to the ECB's courtship phase with QE, but it's worth considering nonetheless.