Today is off to a relatively tame start with yields trading in the narrowest range of the week so far.  It also marks the 3rd straight day of modest recovery and ground-holding following 4 straight days of heavy selling that began last Thursday.  That selling spree served to break yields up and out of the Aug/Sept range.  Now this week's ground-holding is making a case for a new, shorter-term range (1.48-1.56 in 10yr yields).  Ranges that narrow rarely last for long, but we'll likely need to wait for next week to see which side is broken. 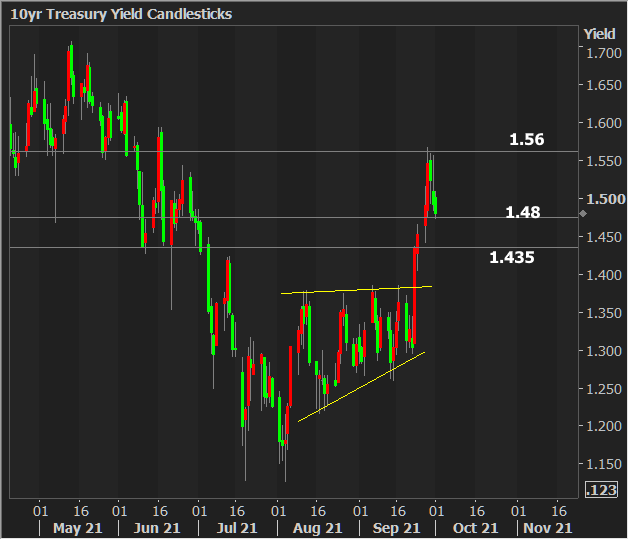 Until and unless yields move back below 1.435, this week's stability is still best seen as part of the digestion process of a move toward higher yields.  Does this mean rates are doomed to continue higher and higher?

Let's talk about this for a quick moment.  All-time low rates are in the rearview for now.  People are worried about how much higher they might go and how long they might stay there.  The longstanding tradition of random-guess forecasting has begun.  It makes people feel better and more hopeful.  That's great.  But it's also worthless.

Could rates continue higher and not return below 3% for years and years?  Yes, that's possible.  Could rates hit new all time lows several times in the next decade with the first instance happening as early as 2022?  Also possible.  The probabilities associated with these outcomes depend entirely variables that can't be so easily predicted.  Will we get another delta-like wave of covid?  That single variable would change the outlook entirely.

Covid or not, I always love to pontificate on the fact that far too high a percentage of market-watchers have had their worldviews unduly shaped by the aberrant hyperinflation responsible for high double digit rates in the early 80s.  Far before covid, my thesis has been that the interconnected global economy, maturing populations in developed countries, and proliferation of technology mean a generally low/flat rate range as a default rule, forever and ever.  We all saw how hard it was for the market to sustain 10yr yields over 3%.  It'll be hard the next time it happens too (if it happens).  Bottom line, since 2008, I've operated under the assumption that yields will spend 95% of their time in a 1.0-3.0 range in the ultra long run.  If that range ever needs adjustment, I would bet on the floor before the ceiling.

All of the above having been said, I still think it's stupid to talk about timing with any degree of certainty.  People who do that are mostly guessing, or simply looking at the timing of past cycles.  If that's all it takes to impress you, then the next all time lows will be in 2023 or 2024 based on the fact that every major long-term rate low has arrived 4-5 years after the previous low since 1993, and that the in-between times have been getting progressively smaller on average.