The stated goal of the ADP Employment Report is to predict the final revision of the US government's non-farm payroll number.  Assessing its efficacy was a tall order before covid and has been a relatively foolish endeavor since then.  So let's get foolish (relatively)!

Warning: the following charts are pretty hard to follow.  I haven't conceived a better way to present the data post-covid, so the y-axis has been chopped off in most cases where huge covid-related numbers would have otherwise crushed the rest of the data series down to a flat line.

"Takeaways" won't necessarily jump right off the screen.  Then again, that's sort of the thesis here: ADP employment data sometimes does a great/terrible job of predicting the NFP data.

First up, here's a simple chart with the initial headline results for each report.  If your impression is that ADP is more even-keeled than NFP, I'd tend to agree.  On the one hand t his chart implies a relatively big drop in NFP from the previous reading.  On the other hand, one could argue that since ADP numbers were higher than last month that NFP could experience a similar token improvement. 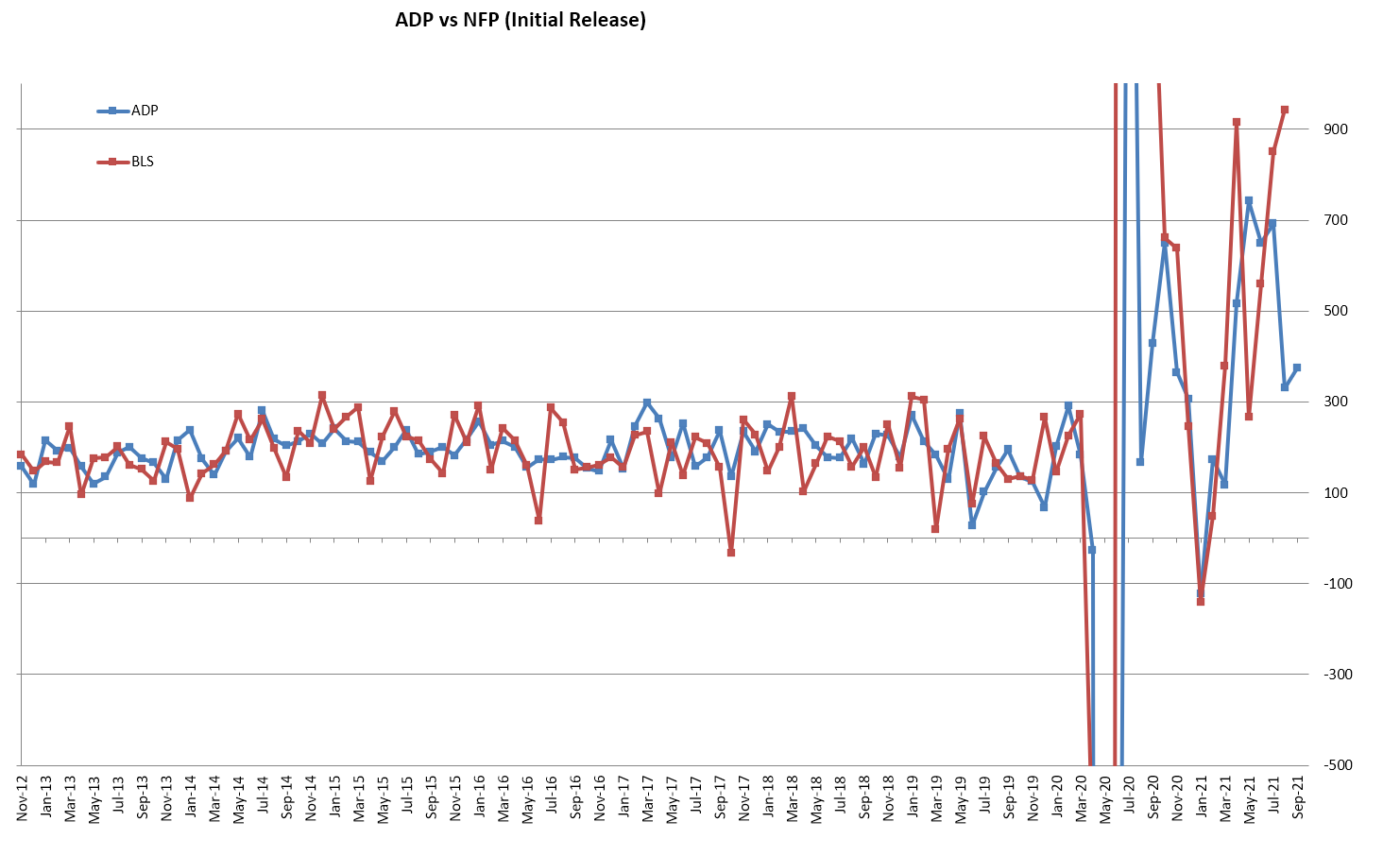 The next chart is simply the difference between the two lines in the previous chart.  For example, if ADP and NFP both came in at 200k on any given month, the line on the following chart would be at zero.  If ADP was 200k and NFP was 150k, the line would be at 50k (i.e. values above zero mean ADP was higher than NFP).  The chart shows that a divergence of more than 100k was very rare before covid, and when it happened, it was typically ADP that was guessing high.  Since covid, ADP has burned rate watchers several times by coming in around 300k lower. 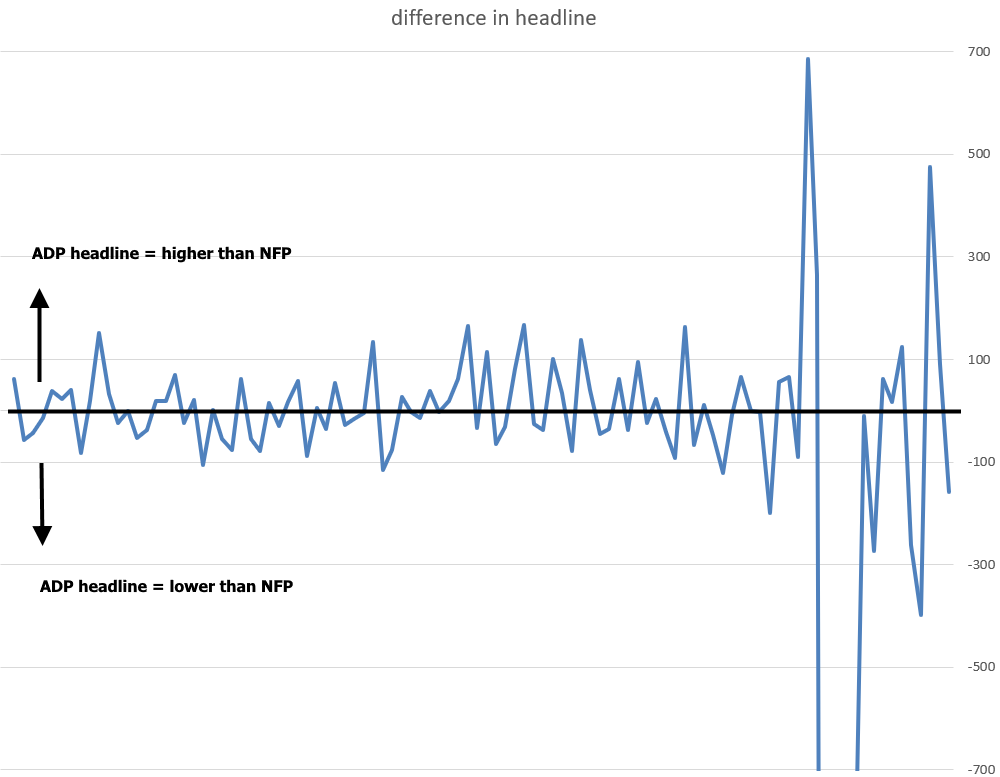 In terms of the bond market's reaction, the headline numbers of these reports aren't as relevant as the amount by which they "beat" or "miss" their forecasts.  Here's a chart of beats vs misses for both ADP and NFP (had to zoom way in on this one).  Basically, when the red and blue dots are both above zero, it means ADP correctly forecasted an NFP beat.  Below zero = ADP correctly forecasted an NFP miss.  If they're on opposite sides of zero, ADP sent the wrong signal (versus forecasts anyway). 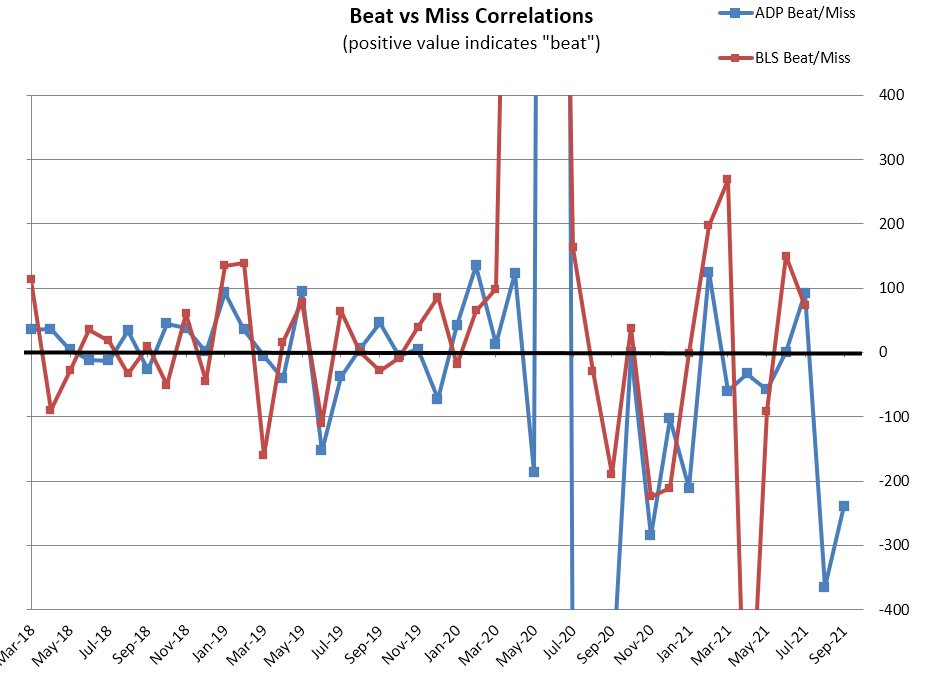 Last but not least, here's a chart that compares the two lines above.  It shows how well beats and misses correlated.  For example if ADP and NFP both missed by 50k, the line would be at zero on the following chart.  If ADP beat by 50k and NFP missed by 50k, the line would be at 100k (meaning ADP's performance vs forecasts was 100k jobs too optimistic).  The takeaway here is that the miscues have been bigger on the downside since covid (i.e. big misses in ADP have been more likely to be wrong than big beats, although there is one notable exception when ADP's beat was more than 600k higher than NFP's). 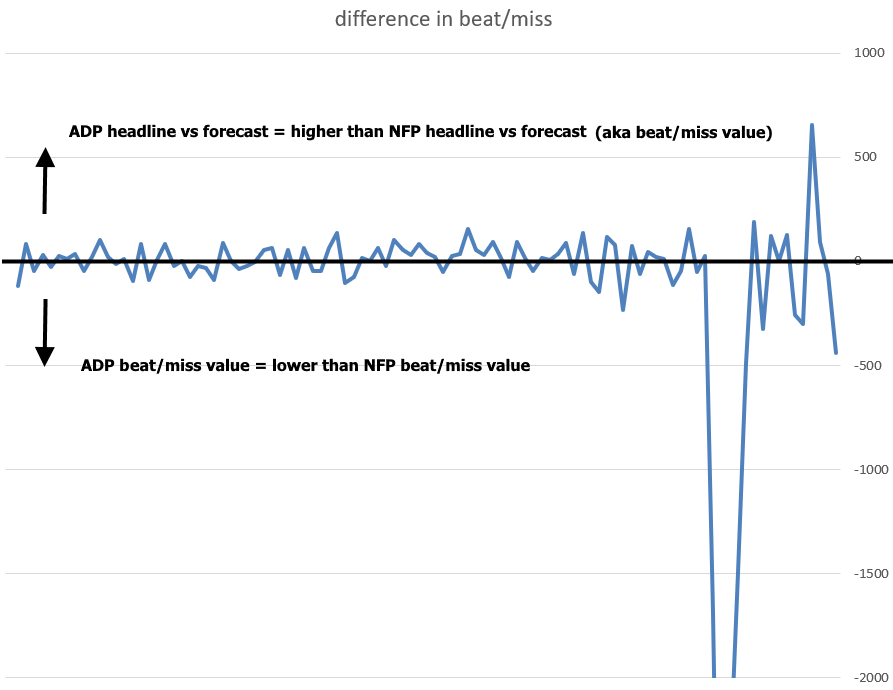