MBS Morning: Data Matters, But So Does Europe

Tuesday morning wasted no time in confirming the relevance of economic data to the current bond market environment.  When Chicago PMI came out weaker than expected (and with components that suggested a bleaker labor market picture on "jobs week"), bonds immediately responded with a decent little rally into positive territory.  Less than an hour later, we're moving back into negative territory as European tapering concerns continue to mount.

European central bank decisions were already in focus in the overnight session.  They were the key culprit behind moderate weakness in Treasuries at the beginning of the day.  Domestic data was able to push back, but European concerns pushed back harder after comments from ECB's Knot.  The combination of overnight and AM weakness in European bonds is quite obvious in the slightly bigger picture. 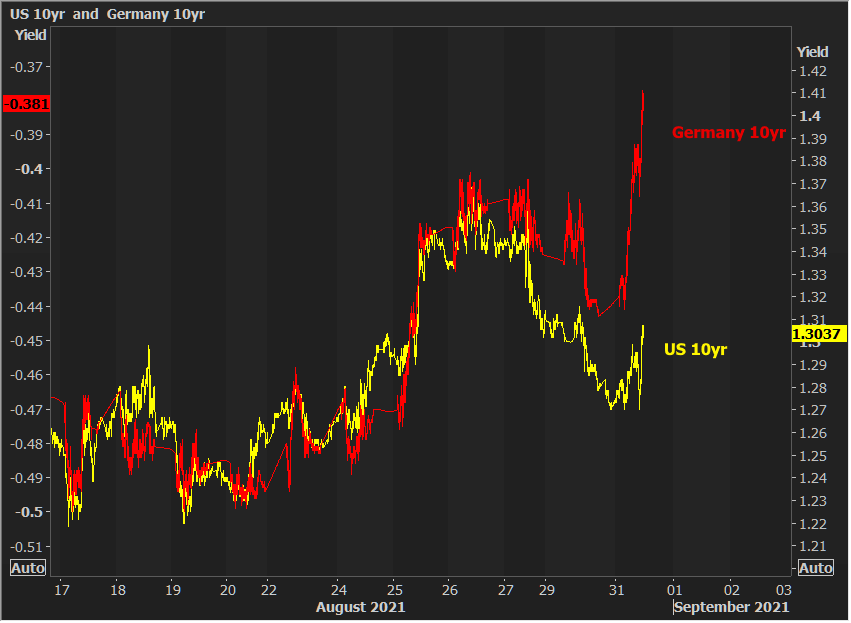 Despite the apparent drama, US yields are actually behaving quite calmly--at least for now.  The 10yr is in the center of a sideways range that's persisted for 3 weeks with a floor of 1.22 and a ceiling of 1.38.  We continue to expect this week's data and events to prompt a breakout, for better or worse.  There could be head fakes and lead changes as well given the potential volatility surrounding the closing/opening of monthly trading positions.