MBS Live Morning: Has The Correction Leveled Off For Now?

Whether we refer to it as a correction or consolidation, bonds have enjoyed a few days of moderate gains after selling off abruptly last week.  Today's trading will go a long way toward solidifying the definition of this move.  This risk is that it has been more of a consolidation with bonds merely catching their breath after the heavier selling.  The possibility is that bonds have turned a corner and put the highest yields behind them for the time being.  Barely anyone is betting on the latter (which is the only reason to entertain it!).

Technicals are in focus to a greater extent than normal because they help justify/explain this week's strength as well as anything.  Specifically, bonds sold off quickly enough to achieve the proverbial "oversold" status by most definitions.  Both longer and shorter term stochastic oscillators (aka "slow" and "fast") are now in agreement on that.  This is a pattern that often precedes enough buying momentum to catch a few breaks with respect to mortgage rates.

That said, if technicals really provided secret answers to future market movement, it wouldn't remain a secret for long.  As such, we can only really approach technicals as a part of a multipronged approach, and even the best example of such an approach is open to interpretation.  The following is just one interpretation.  It gives more credit to the Fed policy shifts for recent selling sprees (as opposed to shifts in the covid outlook) and that could be a mistake.  It's particularly complicated because shifts in the covid outlook were present back in late September, the last time we had a major shift from the Fed.

The following chart shows both of these Fed shifts with Treasury yields, bollinger bands, and fast/slow stochastics.  In both cases:

Today is the 4th day in the current example.  So what happened last time around?  Here's the chart: 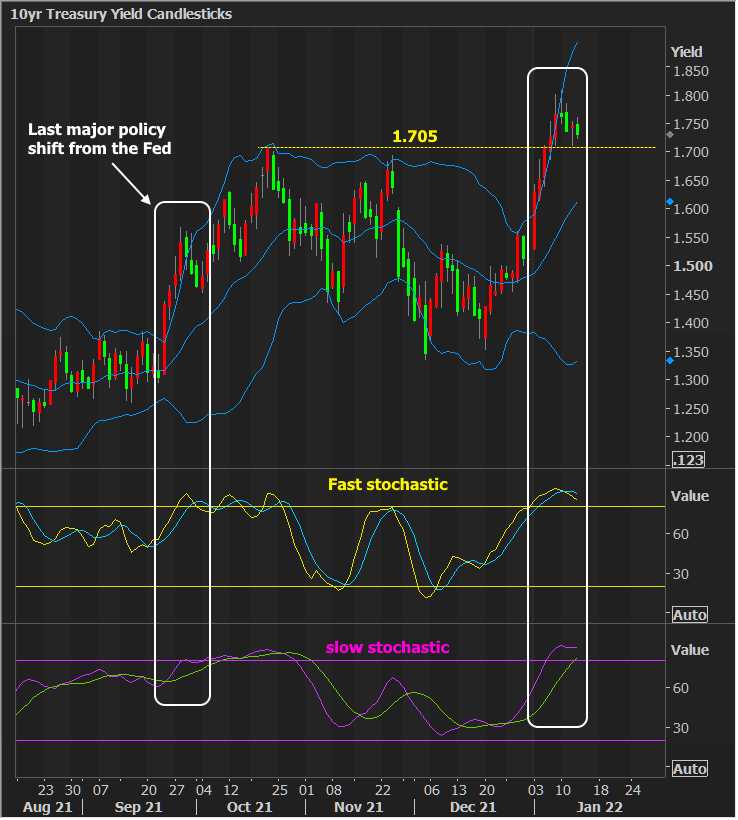 Normal disclaimers apply when it comes to the imperfect clairvoyance of past precedent, but at the very least, this technical landscape suggests caution among those of you who are normally keen to call a top in rates after a quick move higher.  As we discussed yesterday, it probably makes good sense to remain cautious until and unless yields break (and hold) below the 1.70% pivot point.

Today's biggest potential flash point is the 30yr bond auction at 1pm.  Granted, it could also be a non-event, but if it's far enough from averages, it would offer the week's final vote on the palatability of this new, higher yield range.