Pending Home Sales hit their most recent peak in October according to data reported in November, 2021 by the National Association of Realtors (NAR).  In each of the subsequent 6 months, the NAR's Pending Home Sales Index declined until bottoming out in April at 99.2.  Apart from the first 2 months of the pandemic, that was the lowest reading since 2014.

Today's report (for the month of May) finally saw the index improve.  While the gains barely registered, it was a much stronger showing than the median forecast which called for a 3.7% decline.

Realtors remain cautious nonetheless. "Despite the small gain in pending sales from the prior month, the housing market is clearly undergoing a transition," said NAR Chief Economist Lawrence Yun. "Contract signings are down sizably from a year ago because of much higher mortgage rates."

Yun blamed the general ongoing slump on the interest rate surge seen in 2022 so far, saying "choking off demand via higher mortgage rates is damaging to consumers and the economy. The better way to balance the market is through increased supply, which also helps the broader economy."

Yun isn't wrong regarding a correlation between sharp rate spikes and pending sales. 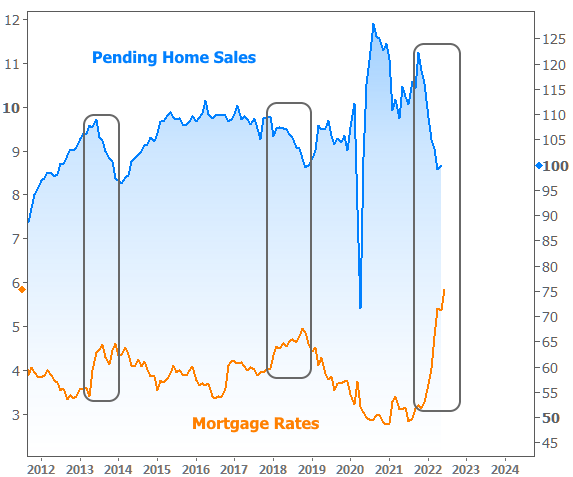 That said, experts were already questioning the sustainability of the housing market's trajectory--both in terms of prices and sales--well before the brunt of the recent rate spike.  In other words, some sort of reckoning was inevitable.  The meteoric nature of the rate spike simply made the timing obvious.

Now the question is one of magnitude.  We already know the correction/normalization is in progress.  The coming months will show us how big of a correction it will be.