Fannie Mae’s economists have again stepped up their expectations for the Fed’s response to escalating inflation. A 7.5 percent annual increase in the January Consumer Price Index (CPI), a 40-year high, prompted Fannie’s Economic & Strategic Research (ESR) Group to raise its forecast for a March increase in the Fed funds rate from 25 basis points to 50. The group says, however, that they disagree with the futures markets in that they expect initial rate hikes, from March through July to total 100 basis points, followed by a pause for the rest of the year while the Fed assesses the impact of both the increases and their balance sheet run off, especially as the Fed has had little experience with the latter.

Faster rate growth, (market anticipation has already boosted the 10-year Treasury Note to near 2.0 percent) along with a major revision to 2021 employment data, has moved the ESR also to downgrade its growth expectations for 2022 real gross domestic product (GDP). The change from 3.1 percent for the full year to 2.8 percent reflects a greater deceleration in the current quarter.

The employment update raised the pace of job growth in the last months of 2021 from the 350,000 per month previously reported to an average of 600,000 and revised labor force participation up by 0.3 point. This suggests there are fewer sidelined workers are available to support additional growth than thought earlier. 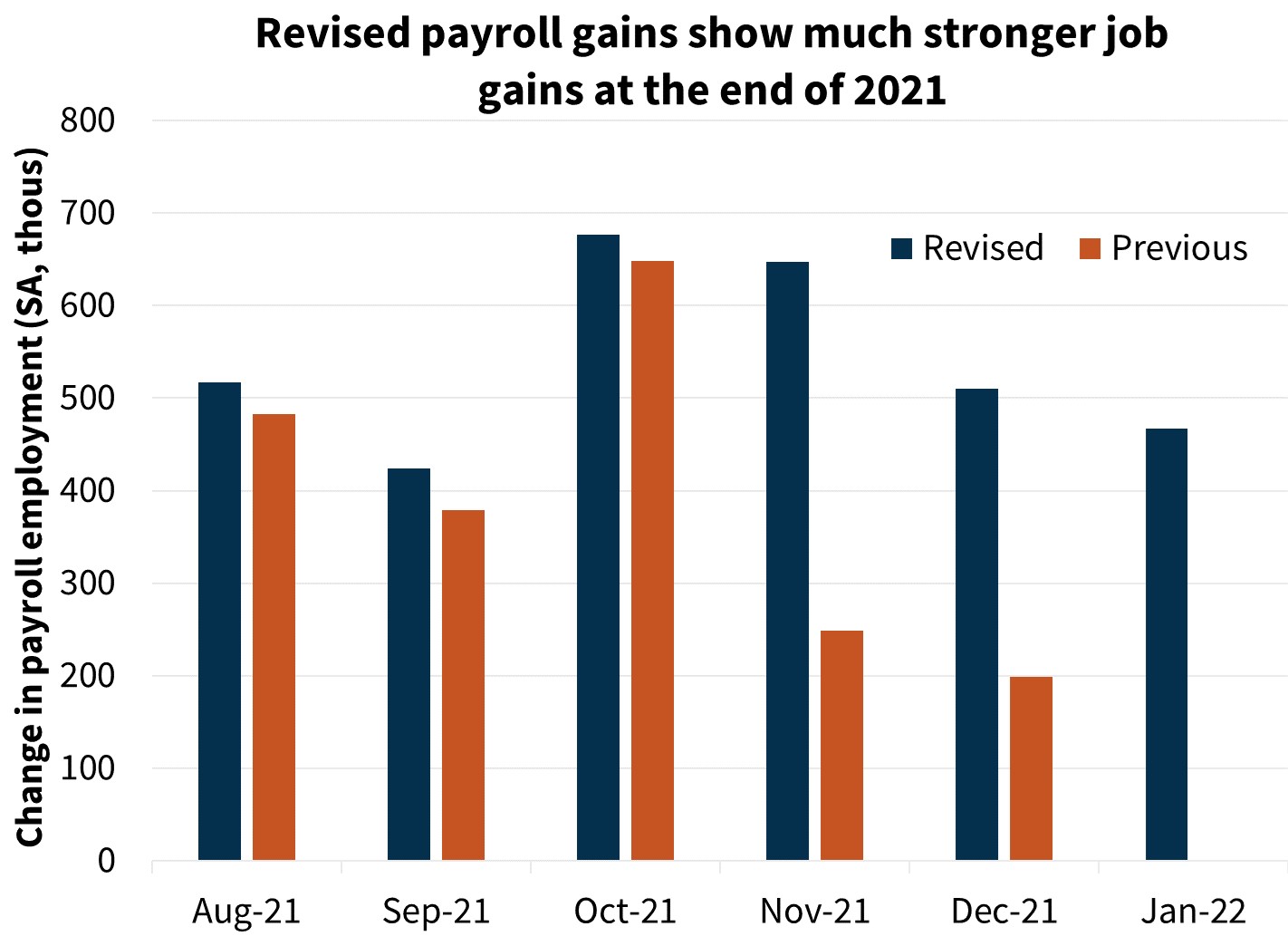 The authors say the 6.9 percent annualized GDP growth in the fourth quarter of last year was probably the peak going forward. The surge was in line with expectations, but the reason differed. Growth was driven primarily by a surge in inventory restocking, i.e., “borrowing from the future.” This debt is now being repaid as inventory rebuilding slows. “Real final sales,” meaning consumption and fixed investment, in contrast, rose by a much weaker 1.9 percent in the fourth quarter. That, combined with rising inflation, an expiration of the extended child tax credit payments, and Omicron related disruptions in January led to a revision in the ESR’s expectation for Q1 2022 down to 1.3 percent annualized growth from the prior 3.4 percent. A short term rebound in Q2 is expected and the 2023 projection remains at 2.2 percent.

Rising rates and slowing growth also led to a downgrade of the housing outlook. Fannie has doubled the size of its projected decline in total home sales to 2.4 percent, in part because of increasing lack of affordability.

Sales will be down but not out as the ongoing inventory problems will help with demand. New home availability is improving; the number of lots being acquired and developed is rising and new homes for sale in December were at their highest since 2008. The limiting factor for new home sales is a matter of how quickly builders can work through supply chain and labor problems but Fannie expects new home construction will remain strong both in absolute terms and relative to existing home sales. They now expect new home sales for 2022 to be 15.4 percent higher than the 2021 total, helping to offset some of the existing shortage of pre-owned homes and thus aid affordability.

They also see multifamily construction to remain robust as vacancy rates and rent growth metrics continue strong. The current number of multifamily units under construction in the highest since 1974, and they foresee another strong year for starts even with rising interest rates. As Treasury rates have risen, so have those for mortgages. The 30-year fixed rate averaged 3.69 percent for the week of February 20, the highest in two years and the ESR expects it to be near 4 percent in coming weeks. The home price gains over the past year have greatly eclipsed income growth so affordability is an issue and more potential buyers are likely to be priced out.

Over the past business cycle, a one-point change in the 30-year mortgage rate resulted in about a 9 percent change in existing home sales two quarters later. Thus, a likely 100-basis point change in the 30-year mortgage rate since last fall, would suggest 10 percent drag on existing home sales by Q2 2022. But rates rising due to accelerating economic and job growth is likely to have a smaller drag than if they are rising because of monetary policy which could lead to smaller growth, which is more like the current situation. The depleted inventory, however, means growing affordability challenges may not hinder near term sales as much as they otherwise would have. 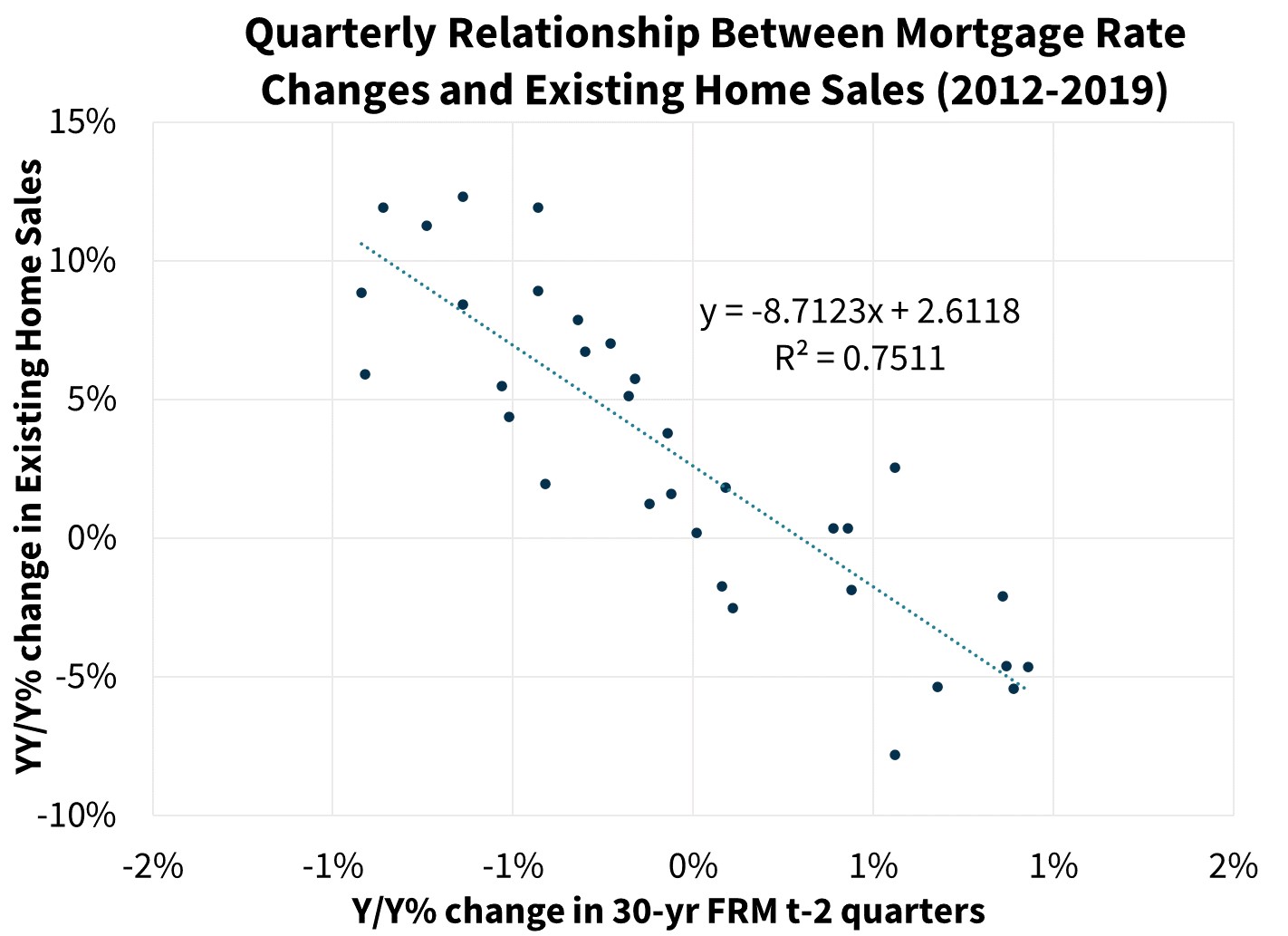 Fannie Mae expects sales to decline quarter-over-quarter in coming months relative to the 2021 end-of-year surge, but they will be only slightly lower than in the first half of last year. Home price appreciation, however, is expected to decelerate considerable, down to an annualized 7.6 percent by the end of this year from 17.3 percent in Q4 2021.

Purchase mortgage volume, is estimated at $2.0 trillion, is down 1 percent from the January forecast but that is still 9 percent greater than volume in 2021 largely because of expected continued house price appreciation. In 2023, purchase volumes could grow to $2.1 trillion, also about 1 percent below the prior forecast.

Refinance projections have been lowered $154 billion or 12 percent to a 2022 volume of $1.1 trillion with a further reduction of $210 billion in 2023 to $860 billion. Both revisions are driven by rising rates. At the current level of 3.69 percent, only about 16 percent of outstanding loan balances have a 50-basis point refinance incentive.

Finally, Fannie Mae expects annual inflation rates to decelerate as the calendar catches up. As of March, the comparative 2021 figures will be much stronger, reflecting the initial surge in the economy back then. For the annual figure to move higher, 2022’s monthly gains would have to accelerate, something the economists see as unlikely. They expect the tight labor markets and rising home prices to continue to drive above-trend inflation but believe “the eye-popping headline numbers are likely to only continue for another month or two.” 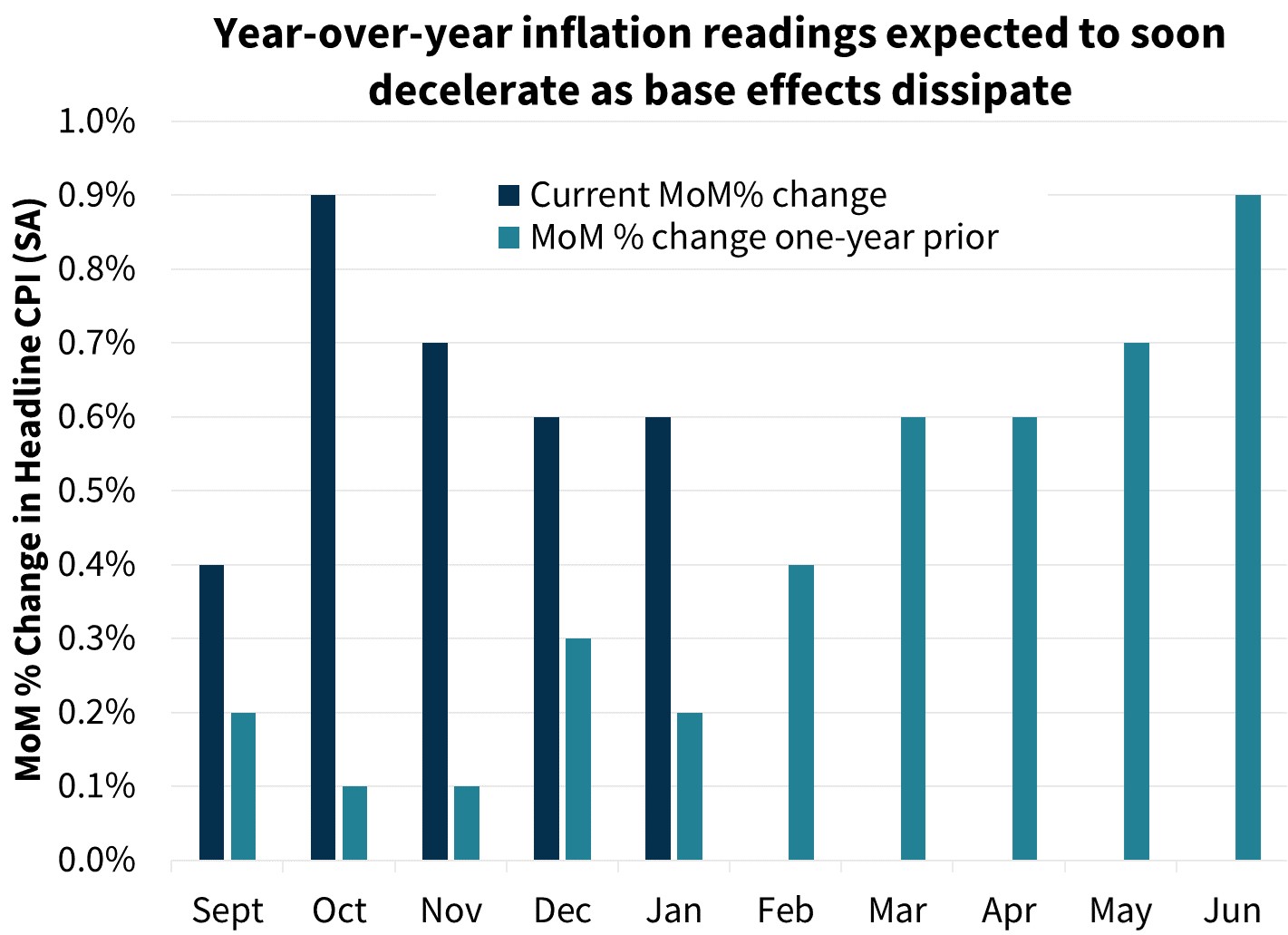