Rate Lock Volume Fell Across the Board in December

Rate locks for the month were down 35 percent compared to December 2020. Black Knight said this was partially a reaction to higher rates, but the usual seasonal slowdown in home purchases also played a role.

Purchase mortgage rate locks fell 22.5 percent although they were slightly higher (1.5 percent) than a year earlier. Rate/term refinance locks declined 17.4 percent to the lowest point in two years and were 74 percent lower than the prior December. Locks for cash-out refinancing also fell by 9.7 percent but were 17.6 percent higher on an annual basis as homeowners took advantage of their high levels of home equity. 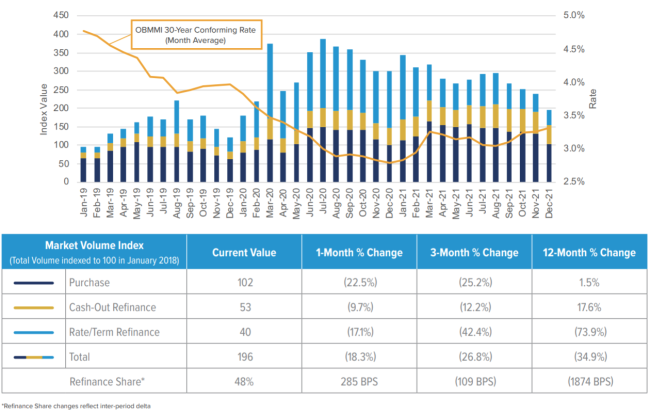 While those locks were down, the refinance share of the month’s activity did go up to 48 percent due to the fading purchase activity. The higher share was accompanied by an annual decline of 20 points in the average credit score for refinancing as higher credit borrowers sat out the rising rate environment. Credit scores ranged from 726 for cash out refinances and 730 for purchase loans to 734 for rate/term refis. Among product types, GSE loans averaged a 744 score, VA loans were at 709 and FHA scores averaged 660. 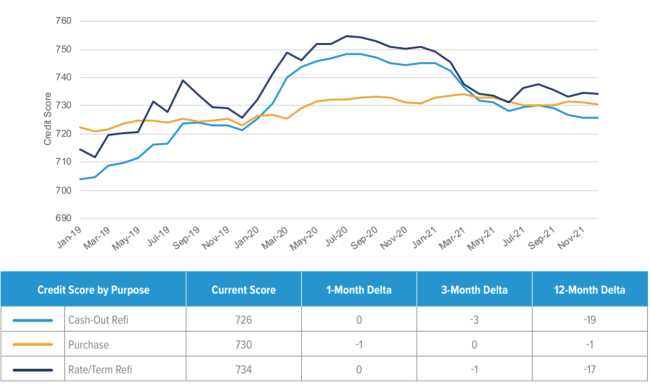 GSE loans maintained their dominance with a 65.3 percent market share although this was down 57 basis points (bps) from November. Non-conforming loans picked up 43 bps to a 14.8 percent share, FHA’s 10.5 percent share was up 2 bps and the VA share rose 19 bps to 8.6 percent. USDA loans lost 8 basis points to 0.7 percent. Black Knight said the increased share of non-conforming loan products at the expense of agency volumes was due to rising loan balances. They rose another $4,000 in December to finish the year at $341,000.

With an average of 3.35 percent at month’s end, the year ended within only 2 bps of the 2021 high. Conforming rates averaged 3.35 percent, jumbos were at 3.23 percent and the VA rate was 3.02 percent. FHA rates were highest at 3.45 percent. The spread between the 10-year Treasury note (1.52 percent) and the 30-year conforming loan was 1.83 percent. This spread is only 1 point lower than it was a year earlier.

The pull-through rate for purchase loans rose 34 bps for the month and 137 bps on an annual basis to 82.6 percent. Refinance pull-throughs, on the other hand, were down 299 and 917 bps from the two earlier periods to 70.4 percent. 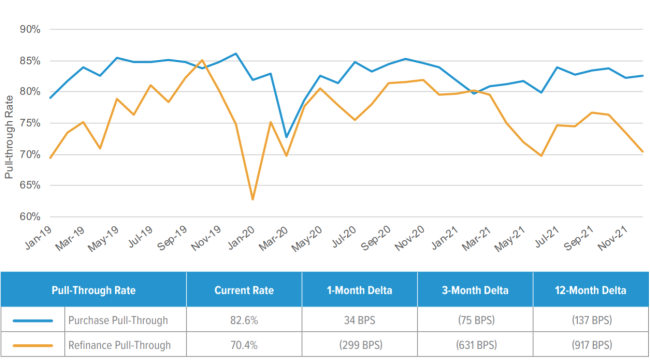