Huge Housing Rebound, All-Time Low Rates, But At What Cost?

This week's economic data included the biggest-ever gain in Pending Home Sales, a leading indicator for the housing market. Meanwhile, mortgage rates pushed down to new all-time lows yet again.

But at what cost?

The most pessimistic way to explain the surge in home sales is to say it was only made possible by the record-setting declines in the past few months. 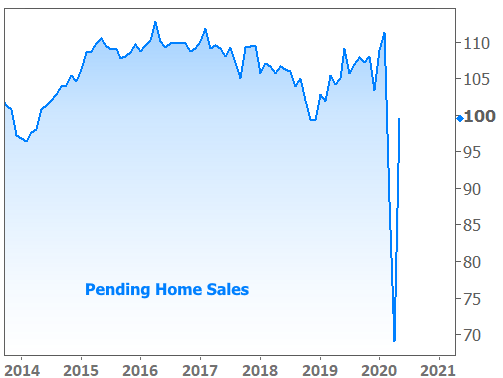 That's mostly true, but it fails to give credit to what the industry and government officials have been doing to help jump start economic activity.  Would sales bounce back like this without all-time low mortgage rates and a stock market recovery (both made possible by emergency intervention from the Federal Reserve)?  Would consumers be as comfortable spending money without the promise of additional fiscal stimulus and other support programs already in place?

While we can't say exactly how big the impact would be if we removed those helping hands, we have to assume things would be worse without them, at least in the here and now.  Critics contend that the emergency programs could cause issues in the future, but as is always the case with emergency support from the Fed or the US government, the preference is to avoid present day pain even if it simply delays the inevitable.

It's also important to keep in mind that we're really only talking about the early stages of an economic recovery.  Many other economic indicators suggest we've only taken a small bite out of the broader damage caused by coronavirus.

For instance, consumer confidence jumped much higher, but it's nowhere near pre-coronavirus levels. 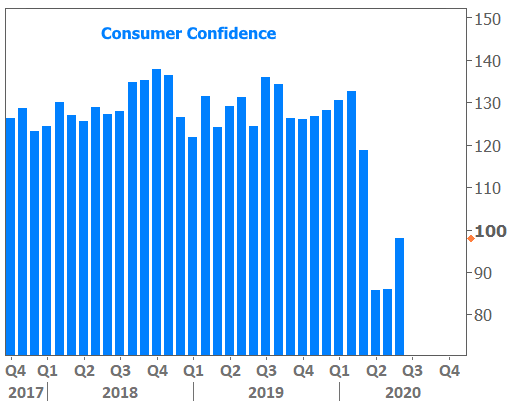 The unemployment rate fell much more than economists expected, but it remains at levels that would be considered borderline catastrophic relative to recent precedent. 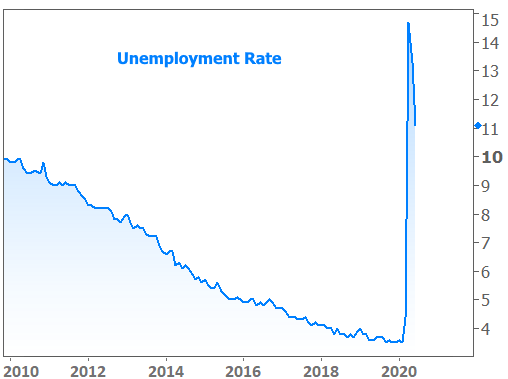 The true test for an economic rebound will be HOW MUCH of the recent precedent can be recovered.  The jury is very much out on that one, and it's going to take plenty of time for that to change.

Financial markets know this.  They've settled into the role of spectators in the battle between coronavirus numbers and economic progress.  Several states have been in the spotlight recently, serving as a warning that it may not be a simple task to reopen local economies without risking an unacceptable increase in case counts. 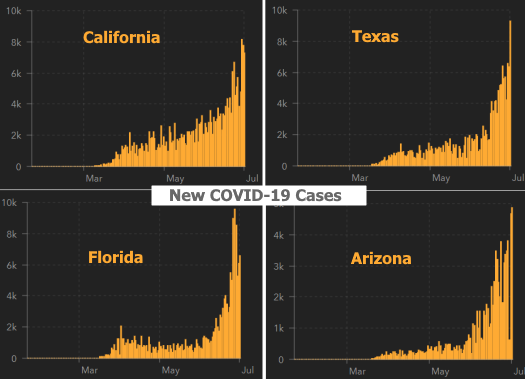 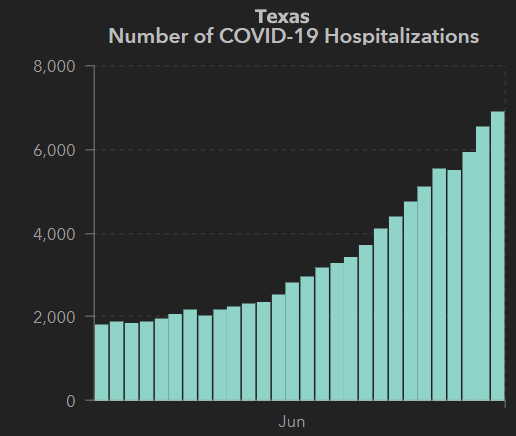 As the correlation between economic reopening and these covid numbers came to the forefront in June, both sides of the financial market (equities/stocks and debt/bonds/rates) halted their prevailing momentum and circled the wagons. In other words, stocks were surging, but since early June, they've been sideways in a narrower range.  The bond market is also consolidating, but with slight bias toward lower rates. 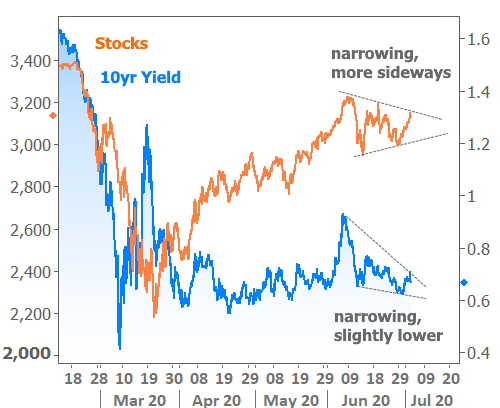 10yr Treasury yields are historically an excellent indicator for mortgage rates.  They still are to some extent, but it's important to remember that mortgage rates did so much worse than Treasuries in March that they've had some extra room to improve recently.  That's why mortgage rates were able to hit all-time lows yet again this week even as 10yr yields remain well above their recent lows. 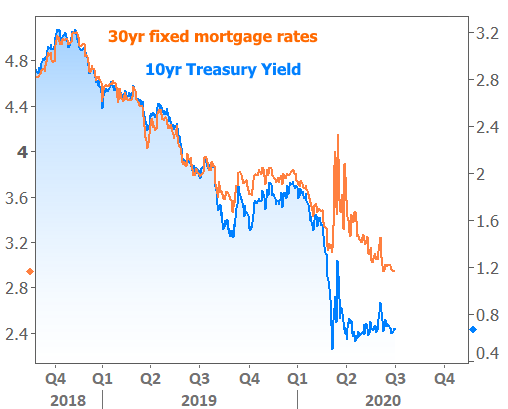 One word of caution on the chart above.  It may look like mortgage rates (orange line) are destined to rejoin the blue line, but there are several reasons that they'll have a hard time doing that.  At the very least, it would take months and months.  Simply put, the chart does not guarantee additional improvements in mortgage rates or that they would be immune to rising Treasury yields.

Financial markets closed early on Thursday in observance of Independence Day and will be fully closed on Friday.  When trading resumes next week, we can expect stocks and bonds to continue taking cues from each other as they both watch the debate between economic performance and coronavirus numbers. The following chart shows the correlation between stocks and bonds that we tend to see on most days. 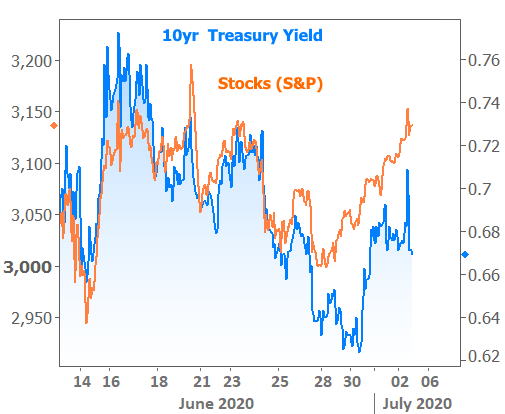