The Sun Also Rises For The Housing and Mortgage Markets

There's no shortage of bad news when it comes to the economy and the housing market. But that's no surprise considering the circumstances.

The sheer size and speed of the economic contraction makes it easy to worry about what the future will look like.  Has coronavirus changed things forever?  Is it true that many jobs have been permanently destroyed?

I don't know.  No one can really know.  Many of the more troubling questions won't be able to be answered any time soon.  No one can deny things are bad and that some things may stay bad for a long time.

But hidden amid the understandable sea of pessimism, there are some reasons for hope.  We're not talking about the kind of hope that makes us complacent to the ongoing economic risks.  Rather, there are simply some positive counterpoints to the abundant negativity in the recent data.  Let's look at both sides!

April's Existing Home Sales numbers were released on Thursday, and they easily fell to the lowest levels in years.  There's not much of a silver lining here apart from the fact that economists expected the number to be even lower. 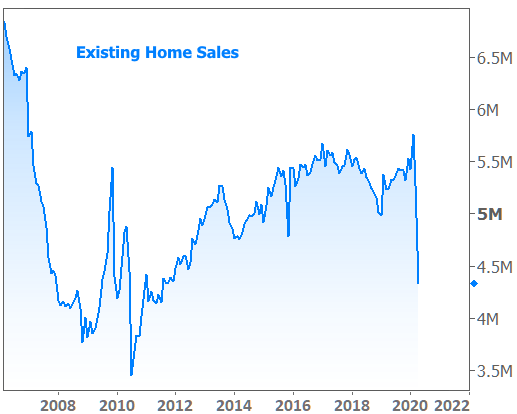 The Existing Home Sales report doesn't capture activity in new construction.  For that, we have to turn to other data released this week on new building permits and housing starts (the ground-breaking phase of new construction).  Here too, things are quite a bit weaker, but the differences between "starts" and "permits" offer a clue.  Specifically, the bigger drop in housing starts suggests quarantine measures are physically preventing new home construction to a greater degree than a lack of demand. 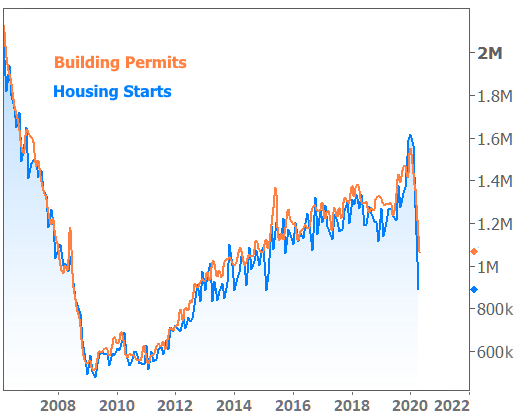 Perhaps that's why builder confidence has already managed to find its footing.  The National Association of Homebuilders (NAHB) reported a 7 point uptick in confidence on Monday after hitting 8-year lows in last month's survey. 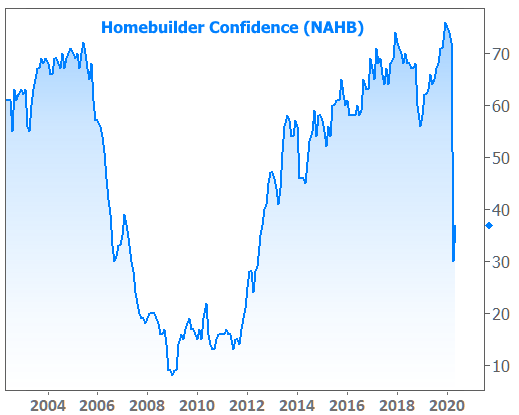 The Mortgage Banker Association's weekly mortgage app survey offers significantly more detail on the shift in purchase activity.  To be fair, this bounce is greatly benefiting from seasonality (i.e. March and April are typically the strongest months).  Even so, if someone says last week's purchase applications were right in line with 2019's average, they're not lying. 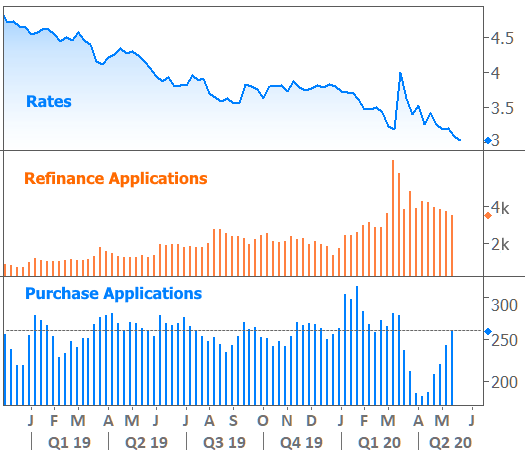 Can we find fault with the chart above?  Is there cause for concern?  How about the decline in refinance applications?  And how does the current level of purchase applications stack up historically?  Here's how: 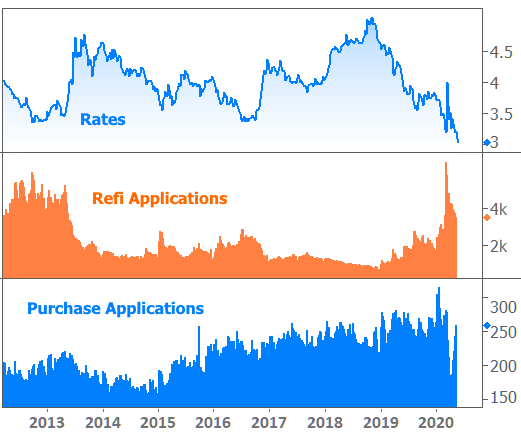 In other words, refi activity is still higher than it was in 2016 and not much lower than the last major refi boom in 2011-2013.  That's a staggering accomplishment considering the operational impediments due to social distancing.  It must have something to do with rates hitting all time lows several times in the past 2 weeks. 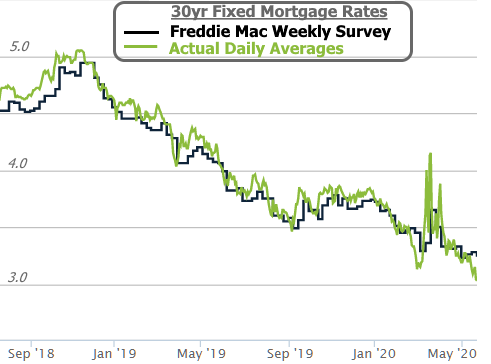 Is there a counterpoint to the low rate narrative?  Several recent newsletters have discussed the mortgage market being in a very precarious state due to the forbearance tidal wave.  And while that definitely kept rates higher for certain loan programs, the wave is clearly beginning to level-off now. 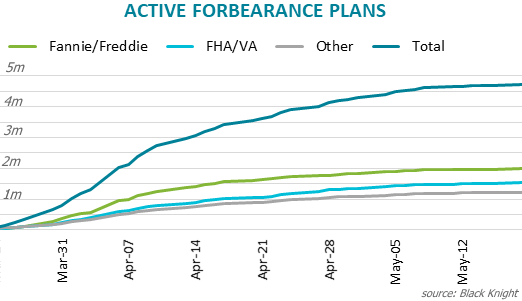 The flattening of this curve means mortgage investors are beginning to calm down.  As a result, credit availability is improving and puzzlingly high rates are starting to move lower for certain programs and borrowers.  This won't happen overnight, but at least it's beginning to happen.

That last thought can be applied to the entire coronavirus saga.  Things have been very bad in ways we've never experienced.  Things won't immediately get better for obvious reasons.  Nonetheless, we can still observe progress and improvement if we know where to look.