Have you ever worried about the negative repercussions of some anticipated event in your life only to find out they weren't so bad?  For the bond market, last Friday was one of those days.  The much-anticipated phase 1 trade deal was (kind of) announced by both the US and China.  Apparently, there are still a few details left to hammer out not to mention the fact that the thing won't be signed until January at the earliest. Ultimately, it was those "yeah buts" that allowed bonds to almost fully erase the massive day of anticipatory weakness seen last Thursday.

That said, last Thursday wasn't the only day that bonds were allowed to harbor some negative anticipation.  Realistically, most of the last 4 months have been spent coming to terms with the eventual end of the trade war.  By now, even my 12-year old son understands the trade war is an excellent manufactured tragedy that gives Trump an easy victory on a key policy goal heading into next year's election.  Markets know where this is all heading (probably), and the only uncertainty is the extent to which Trump's plan may backfire.

When the Chinese commerce ministry abstained from offering a dollar amount on agricultural purchases last week and more importantly, when the deal itself simply wasn't signed, shadows of doubt crept in with respect to such a backfire.  But a backfire scenario is not the baseline--just a concern to be managed between now and whenever it becomes clear that we are on the final approach to restoring full-strength trade relations with China (Sept/Oct 2020 most likely).

Such a long time frame means that bonds don't have to rush to get back to higher yields.  The Fed clearly on hold until and unless inflation increases significantly and sustainably.  The global economy could still build enough negative momentum that a trade deal won't save it.  The US economy could even run out of steam simply because investors become too concerned about the incredibly old age of the expansion (the TV likes to say expansions don't die of old age, but if you've ever identified with the notion of "quitting while you're ahead," you disagree).  All these things and more are enabling 10yr yields to remain under 2% even in a world with 3.5% unemployment and ongoing economic growth.

All we can really do in such an environment is to watch the range trade that invariably ensues.  Guard the ceilings and capitalize on the floors.  This week begins with an important ceiling (1.86%) already under attack.  If it's successfully defended, the counterattack target would be 1.79%.  Either way, it's important to appreciate that the overall trend is gradually pushing back toward higher yields since September.  That process won't be in question unless yields move below 1.70%. 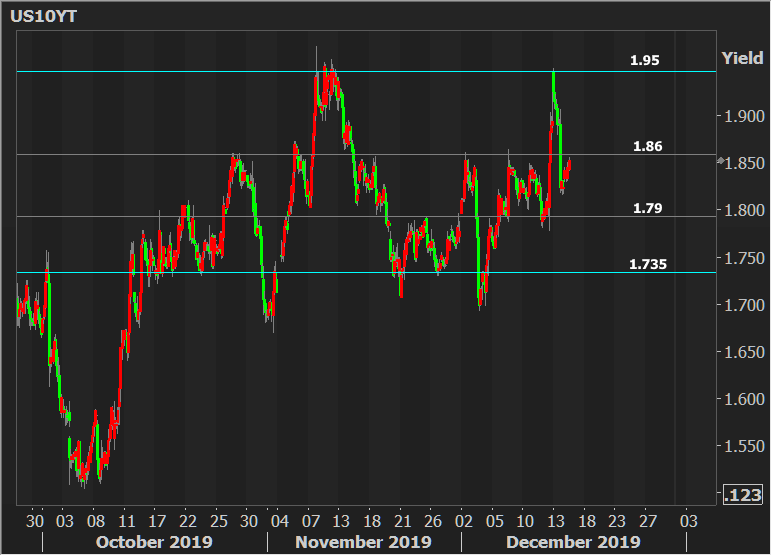