If bonds needed an excuse to move up and out of their lowest range since February, last week's jobs report provided enough of an opportunity for sellers to test the waters.  The fact that we're seeing modest gains at the start of the new week means the decision has not yet been made.  Data will provide a bit of guidance.  Any outsized strength or weakness in the Treasury auction cycle will provide a bit more.

When it comes to data, the calendar is limited, with CPI being the only bigger ticket event (core, y/y seen at 4.3% vs 4.5% previously).  That'll be out on Wednesday morning with the week's most important Treasury auction (10yr) following that afternoon.  If bonds haven't tried to stage a big break above 1.30% by then, it would speak to a certain open-mindedness about the effect of last week's jobs report on the Fed's tapering timeline.  There are several weeks to go until getting more official clarification from Powell at Jackson Hole.

In the meantime, we'll need to decide how much we care about individual technical levels versus a general sense of momentum.  While it's useful to call out specific technical levels for analytical purposes, they're not magic.  We can forgive a bit of a break above 1.30% if yields are still mostly grinding sideways, and especially if we're avoiding any inexplicable snowball selling sprees.  A slightly larger range could even include something around 1.44--recently a very relevant pivot point--while still sending broadly "sideways" messages. 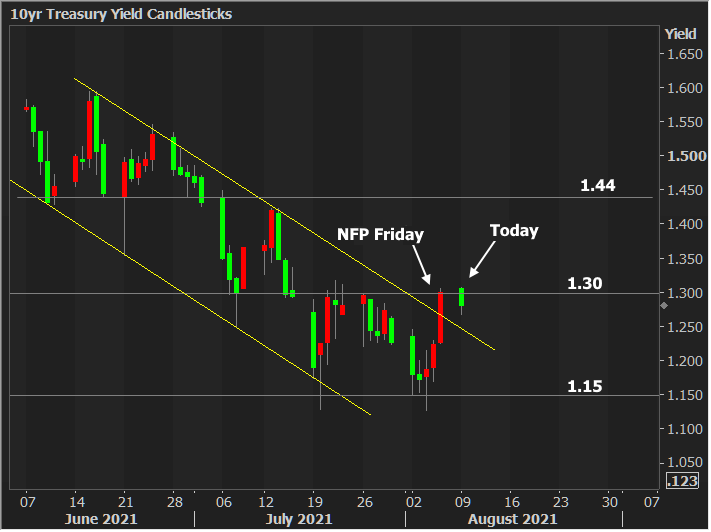