Heading into the weekend, the delta variant continued driving a surge in U.S. covid case counts with Friday's 118k+ being the highest day-over-day increase since February 5th.  Officials expect the surge to continue into mid-August.  After that, everyone would like to know how the return to school will change things in September.  One of the key players in the "would like to know" camp is our own Federal Reserve, who is very much in the process of refining their policy outlook based on the case count situation and associated economic response.

A new Fed policy announcement will be released Wednesday afternoon, and while it won't contain an official update, it could expose a potential shift in the Fed's line of thinking (or lack thereof).  Will the Fed ramp up its stated level of concern over rising covid case counts? Will they acknowledge a softening in the data or an undershooting of the substantial recovery goals?  Either way, the clarification could be worth something to bonds.

In the meantime, Treasuries begin the week trying to maintain the bullish pivot that took place over the past 3 weeks (with July 6th through the 16th marking failed attempts to move below 1.295% and the entirety of last week spent mostly under that level in terms of 10yr yields).  With yields rising up to 1.28% this morning after some overnight strength, it's too soon to say. 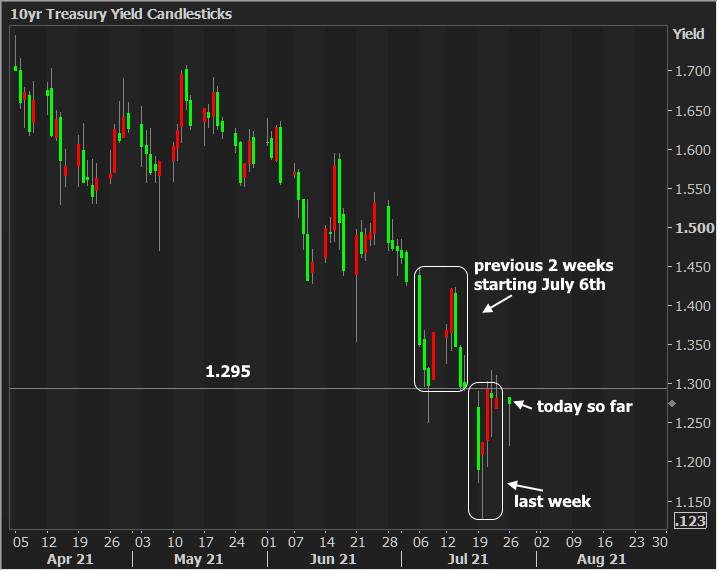