Strong Start, But Tuesday's CPI is What Matters

There are times when a particular event garners too much attention as the most important consideration for bond market momentum.  If any event were to be considered for such a label, it would surely be Tuesday's CPI report.  In this case, however, the excessive focus is quite possibly--or even probably--perfectly justified.  Between now and then, we have no scheduled economic data--just the 3 and 10yr Treasury auctions on the calendar.  Bonds have managed a slightly stronger start despite supply headwinds, but the gains are small enough to suggest rates are merely biding their time at recent highs before taking their next cue from CPI.

Looked at another way, yields may be trying to finally break below the uptrend that began in early August.  But until getting confirmation from CPI, the most bullish conclusion would be that selling pressure has leveled off into a holding pattern with 10yr yields under 3.35%.  Whether or not 3.26% is the floor of the short term range doesn't much matter.  The move that follows a big beat or miss in tomorrow's CPI would occur on an entirely different scale (i.e. we would be looking more for a double digit day-over-day change in 10yr bps as opposed to the 3-4bp change seen so far today). 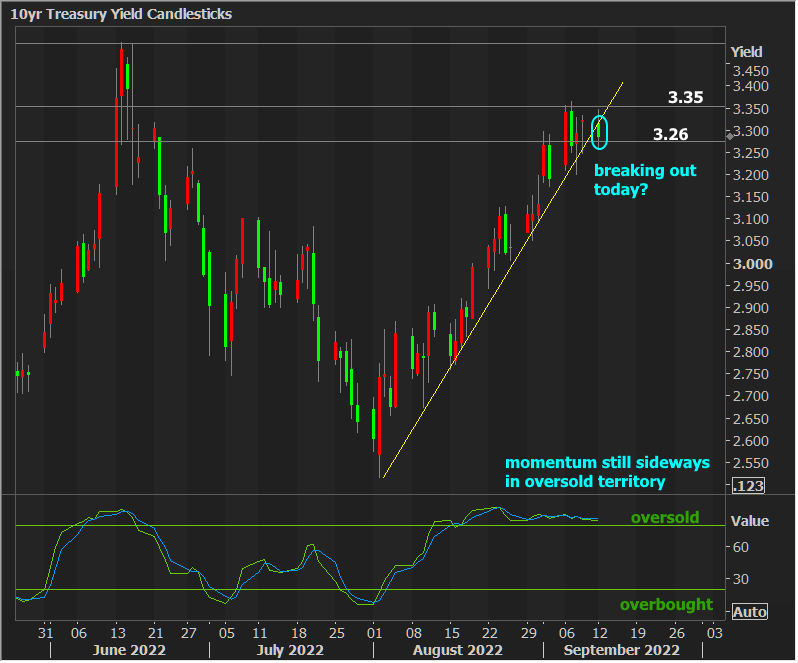 As far as dark horses go, today's 10yr auction could tip traders hands on dip-buying prospects if it happens to come in exceptionally strong.  On the other end of the spectrum, it wouldn't be a surprise to see some hesitation to commit ahead of CPI.