Sideways to Slightly Stronger as Bonds Prepare to Defend The Range

Although Friday's post-payrolls sell-off was unpleasant for the bond market in the context of a single trading day, it was arguably a resilient showing considering the strength of the data and the shift in Fed rate hike expectations earlier in the week. After all, Fed Funds Futures for mid-2023 added almost 50bps from Tuesday morning before Daly's rate hike comments through Friday's close. Meanwhile, 10yr Treasury yields rose less than 30bps. Also potentially relevant is the fact that yields generally held under the prevailing ceiling of the past 2 weeks at 2.85%, albeit with a brief breakout on Friday afternoon.

The chart below plots mid-2023's Fed Funds Futures (the expected level of the Fed Funds Rate) on the same axis as 10yr yields.  There is ample correlation, to be sure, but notice the blue line break quickly above the opening levels from 2 week's ago and then above the mid-week highs during Friday's sell-off.  Contrast that to 10yr yields which held under the opening levels from 2 weeks ago on both occasions. 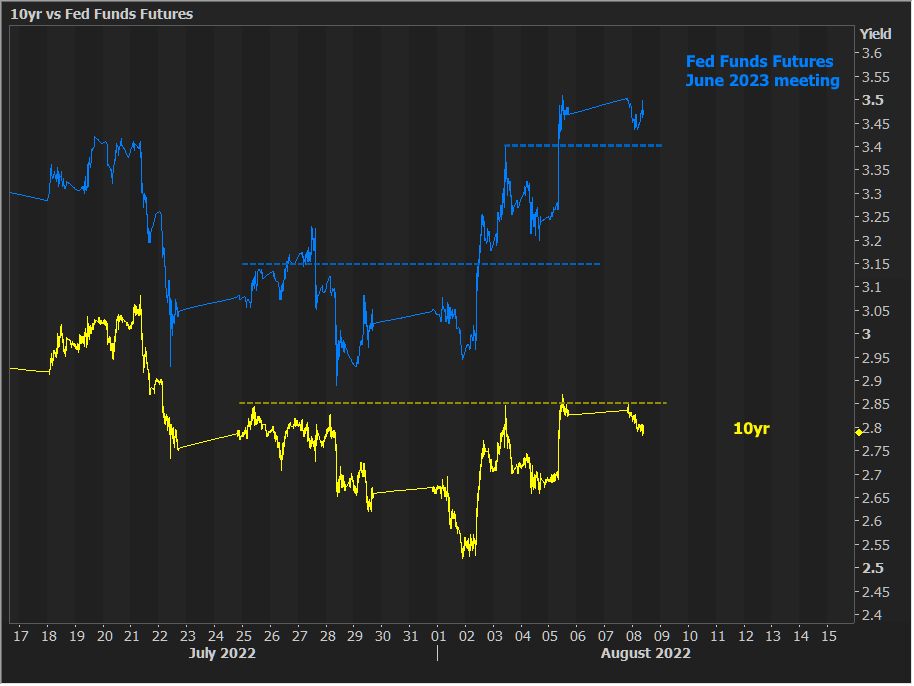 This is a good show of resilience simply considering the Fed-speak and the econ data, but bond were facing other headwinds as well: corporate issuance and overbought technicals.  We mentioned both on several occasions last week, but the corporate issuance topic bears repeating.  To put the supply surge in context, last week was one of the 3 biggest weeks of the year for corporate issuance whereas July was the 2nd lightest month of the year so far.  Part of that pattern is seasonal, but that same thesis says that August should be even lighter.  It's very significant then, that August has already overtaken July, with just a week and a day in the books so far!

All that to say, bonds may have lost a good amount of ground last week, but it should have been worse, all things considered.  From here, it's an understatement to say all eyes are on Wednesday's CPI when it comes to determining the next leg of the trend.